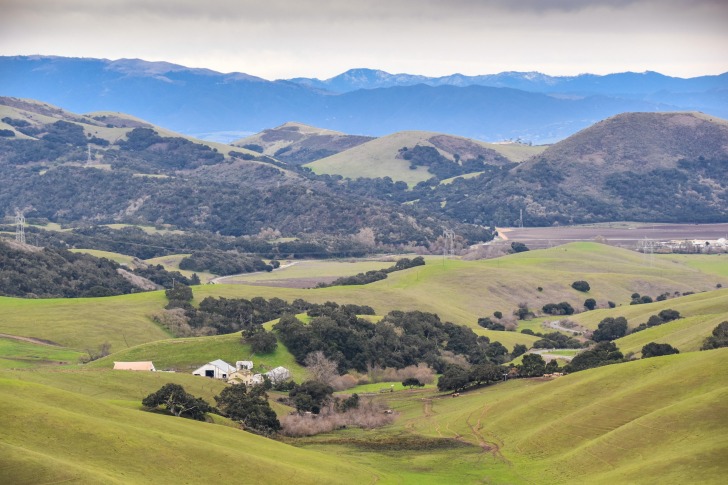 Whether you’ve eaten something from there or read about it in a novel, a part of you probably has already experienced Salinas, California.

Nicknamed The Salad Bowl of the World due to its rich agriculture, Salinas has an environment that thrives on the land and the workers that tend to it.

It was also the home of the late Pulitzer-prize-winning author John Steinbeck of The Grapes of Wrath fame.

This region of Monterey County is generally referred to as the Monterey-Salinas area, with Monterey being the city on the Pacific coast.

Both cities bring their unique slice of history and culture to this region.

To avoid sticker shock for any tourist, Salinas is rated as the #6 Most Expensive Place To Live by U.S. News & World Report but also scored in the Top 10 of Best Places to Live in California.

This area has a large Latino population, making up 80% of residents.

This is a younger population too, as the majority of residents are 20 – 44 years old.

There's medium overall risk. In between all the beauty and history, there's an underbelly of gang activity here. While the average tourist isn't always going to be a target, it's a wake-up call to stay in your swim lane and out of gang neighborhoods.

There's transportation to and from the San Francisco Bay Area airports, and then there's the Monterey-Salinas Transit (MST) throughout Monterey County. You can also get a cab or rideshare. There's a low risk, but having a car in this area is almost essential to be able to explore all the attractions.

There were seven pickpockets reported in 2020. That's a low risk. It's a good idea to not carry around large amounts of cash here, given the potential for crimes. If you do bring cash, don't have it in a wad. Spread it throughout different purse/wallet compartments and pockets.

California is mostly prone to earthquakes and wildfires. Salinas sits near the infamous San Andreas Fault line. The potential of these disasters gives it a medium risk, but day-to-day there's a low risk.

Of the 233 robberies reported in 2020, 151 of them were "highway robbery", which is the most likely to focus on tourists. That's going to force a medium risk on this, but it's probably connected to gang activity as well, so avoid gangs and you can avoid the risk.

The scams we found were directly targeting locals, not tourists. There's a low risk of it happening on a trip to Salinas.

In Salinas, it's medium risk. Stick to the tourist spots. Don't walk around at night and keep your purse close. I suggest a crossbody bag. There might be some catcalling from the fields and a few uncomfortable stares.

The water is safe to drink and there's a low risk. Any contamination concerns are quickly addressed by the utility company.

Safest Places to Visit in Salinas

It might be worth reading The Grapes of Wrath or East of Eden (again?) to get into the spirit of Salinas on your way.

It will give you plenty of talking points as you walk through the National Steinbeck Center and see the noble laureate’s home, where you can have a nice meal.

Walk around the Salinas City Center for a look at the history of this agricultural community while enjoying fresh fruits and veggies and getting some souvenir shopping done.

To burn some calories, head to Fort Ord, where you can see a former Army Post and walk, bike, or horseback ride through nearly 15,000 acres of untouched western land.

Chinatown has an impressive presence in this town and it is one of the largest Asian cultural communities in between the San Francisco Bay area and Los Angeles.

Wind through Monterey County wine country on the River Road Wine Trail, starting on the Southside of Salinas.

You can sign up for a VIP tour behind the scenes, get a guide to walk you through, and even hire a driver so you don’t have to worry about overindulging.

The Monterey Zoo is just eight miles south of Salinas.

Places to Avoid in Salinas

Avoid any spot that isn’t specifically made for tourists.

The central part of the city has higher crime numbers, but that’s common in most city cores.

There are some neighborhoods east of Highway 101 to avoid as well.

We strongly recommend that right before your visit you check out the crime map provided by the local police department to see where the crime trends are.

Don’t wander around at night.

This isn’t a city with big nightlife.

Avoid going hiking alone if you can, and avoid any path that is blocked off.

If you are caught on the paths after dark you could face a fine or jail time.

Safety Tips for Traveling to Salinas

So... How Safe Is Salinas Really?

All the crime rates in Salinas, except for homicide, are higher than the national average.

There’s a one in 188 chance of being a victim of violent crime.

That’s lower than the California average, but also keep in mind that California has some very dangerous communities.

Property crime chances are one in 45.

The motor vehicle theft rates are three times higher than the national average.

That’s just a little extra motivation to lock up your car and secure your belongings.

This is not a city where you just drive around to look at the different neighborhoods.

The communities can be hit or miss for crime, and any suspicious activity by a stranger is going to get unwanted attention.

It’s important to remember you are in an ethically-diverse area and you need to respect local customs and culture.

It’s a good idea to talk to the concierge upon arrival or even visit the local police station to learn the do’s and don’t of this community.

If you are choosing between staying in Monterey or Salinas, Monterey is safer in violent crime statistics and offers many more things to do, in addition to having a bay area that leads to the Pacific Ocean.

Tourists might choose Salinas due to lower hotel room rates, but this is an area of “you get what you pay for” when it comes to travel.

Either way, don’t miss Monterey during a trip to Salinas.

The two cities go hand in hand for travel in this region.

How Does Salinas Compare?