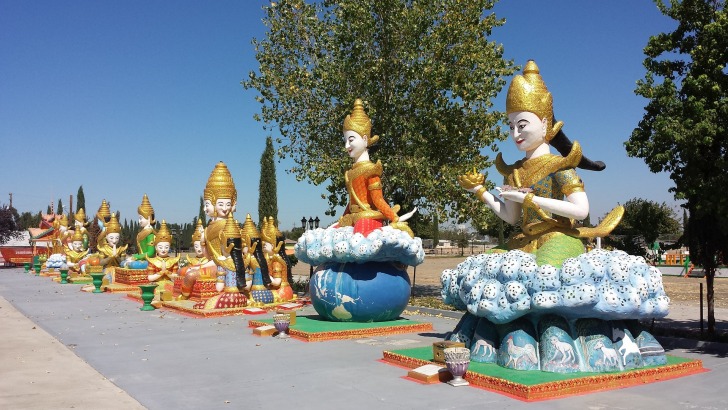 Stockton sits at the heart of San Joaquin County amidst the farmlands of the Central Valley.

The Yatchicumne, a branch of the Northern Valley Yokuts Indians, initially settled the area.

Stockton was the center of the California Gold Rush in 1848 and officially became a city in 1850.

Built at the start of the California Gold Rush, the seaport provides easy access for trade and transportation.

This peat-rich acreage, which grows winter produce and fruit, including grapes, onions, oranges, and varieties of winter squash, is fed by thousands of miles of waterways, creeks, and tributaries that make up the California Delta.

With an estimated population of 320,000, Stockton is California’s 13th largest city and has been named an All-American City four times in the past two decades.

Stockton has a high crime rate. Reported crimes in the city are 2.5 times the national average, and the chances are 1 in 23 of becoming a victim of crime. The good news is that reported crimes have decreased 20 percent year over year.

Stockton has reliable national taxi and recognizable rideshare companies. It also has several smaller taxi and shuttle companies that service the airport and surrounding Stockton areas. Many taxi services in the United States charge an additional credit card fee. As a tourist, keep to legitimate transportation companies and be aware of the people around you when paying for the fare. Some minor transportation services will only keep to specific areas, so check your destination in advance. Always have a backup to your transportation plans - making transportation plans in advance or through your hotel's front desk or concierge.

In Stockton, the danger of falling victim to theft is significant. Pickpockets may not reach into pant or coat pockets, but they do steal wallets, passports, cell phones, and other valuables from people's clothing and bags in public. To minimize chances of being a target, keep valuables close, do not flash cash. Do not set purses or backpacks on the backs of chairs.

Stockton sits in Northern California along the San Andreas fault lines, so earthquakes are possible. Because the city sits at the Delta and the intricate waterway systems throughout the area, even minor rainstorms can cause street and area flooding in lower-lying areas.

A mugging occurs when someone is attacked and robbed in public. Muggings can be crimes of opportunity or victims followed from a safer area to a more isolated place. Stockton's city center has some of the highest incidences of theft. The best possible defense is to be aware of your surroundings and hide your valuables.

Terrorists are individuals or small groups inspired to act by a specific ideology. These attacks usually target public events or places. Stockton is a seaport, which may pose additional risks. Following law enforcement instructions and staying up to date on local news can protect you from danger.

Beware of panhandling. As it is no longer a crime, those begging for money on public streets can become quite aggressive. It is a noticeable problem in Stockton. A common scam in the Bay area is tampering with ATM and credit card reading machines to duplicate card numbers. Be aware of street ATMs and often check your credit card or bank statement when traveling.

There is a substantial crime risk throughout the city, regardless of gender. With that in mind, the risk of falling victim to crime, violent or not, specifically to women, is real.

Supplied by area groundwater (wells), surface water from Stockton East Water District, and the Delta, the Stockton city water supply meets all federal and state drinking water standards and is safe to drink. However, past contamination by cyanobacteria has made residents cautious.

Safest Places to Visit in Stockton

If you are looking for a day of safe fun in Stockton, visit one of the many galleries and museums.

The Bob Hope Museum celebrates the life and history of the famed entertainer.

The Haggin Museum is an art and history museum considered an undiscovered treasure by locals.

The Haggin Museum is open Wednesday through Sunday with an admission price of $8 – free for children under ten years old.

The temple is free and open to the public from sunrise to sunset.

Placess to Avoid in Stockton

Stockton, California, has a storied past.

Generally, according to Stockton Police-reported crime statistics, downtown Stockton, the Seaport, and Civic Center are the most dangerous parts of the city.

Some neighborhoods and suburbs of concern include Lodi, Modesto, Oakdale.

Other public places in Stockton to avoid or take precautions include several blocks immediately adjacent to the University of the Pacific along W Pacific Avenue, W Harding Way, and north of the University along N El Dorado.

As a rule, avoid waterfront areas at night, staying in well-lit areas.

While Mission San Jose is a true landmark, the area around the park after dark deserves caution.

Safety Tips for Traveling to Stockton

So... How Safe Is Stockton Really?

Stockton is a true melting pot of people.

According to the FBI, Stockton is more dangerous than 95% of United States cities. Violent crimes in Stockton are 229% higher than the national average.

The most prevalent crimes are property, theft, and assault.

However, crime has decreased over 20% over the past year.

Recognizing the need for improvement, the City of Stockton has recently prioritized crime reduction and community outreach programs.

Residents consider the West part of the city the safest.

In contrast, Downtown Stockton is the most dangerous.

In general, you have a 1 in 24 chance of becoming a victim of crime and a 1 in 79 probability of facing violent crime in Stockton – almost three times that of California.

According to reported crime statistics, some of the safest areas are east and west of downtown Stockton, including Holt, Gillis, Waterloo, Armstrong, Bear Creek, and Lane, all upscale suburban neighborhoods.

Downtown Stockton is a diverse community offering a collection of trendy bars and unique farm-to-table restaurants, a waterfront amphitheater, and open-air shopping.

Fun both day and night.

But travelers are encouraged to use precautions when out and about in city crowds, including not carrying cash, staying with the group, and being aware of their surroundings.

How Does Stockton Compare?