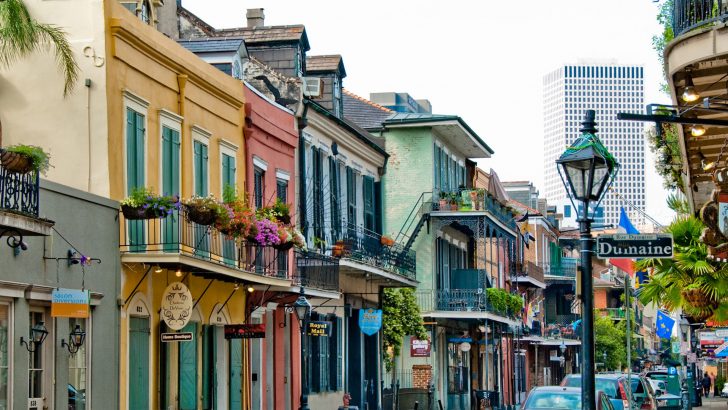 This Cajun slice of Louisiana life is filled with parties, history, and wild nights – and that’s even before Mardi Gras season starts!

New Orleans is known for its distinct neighborhoods that go beyond the French Quarter, which is what most people are familiar with when they think of the city.

The Garden District is a calmer side of the city with gorgeous homes and lush landscapes.

Frenchman’s Street is still lively but without the chaos (and smell) of Bourbon Street.

Treme is the oldest African American neighborhood in the city, with culture and history worth seeing.

The riverfront brings activity from paddleboat tours to outlet shopping with some of those amazing beignets on top of it.

Art lovers should see the Warehouse District with galleries and trendy shops and cafes.

If you want to visit during Mardi Gras, you can visit up to a month ahead of time, but the parades start a few weeks before Ash Wednesday.

Check the calendar because Fat Tuesday is on a different day every year.

Expect prices to go up and bookings to sell out months ahead of time the closer you get to Fat Tuesday.

The weekend before is especially packed.

To get out of the city, you can take tours of historical battlefields or take a swamp boat ride to see alligators.

Ghost tours are popular here with the incredible number of sinister and otherworldly stories that haunt this historic city.

Be prepared for sensory overload in most of the NOLA city area.

It’s a lot to take in, so plan ahead of time.

You’re on a good start with this safety article.

There's a strong, solid medium risk here due to the crime rates and the ongoing potential for crimes of opportunity. I've been to NOLA several times, and it's truly a unique test of personal safety skills and situational awareness.

You can easily get around NOLA without having a car, but there are plenty available. There's a street car and bus system that gets you to all the hot spots. Shuttles are available to and from the airport. Parts of the city are walkable, but some neighborhoods are too far away for tired feet to handle.

Treat this with a high risk. I would never walk any NOLA streets with a normal purse. I bring a small crossbody bag with just one credit card, my ID, and I keep cash stored somewhere out of sight, but not with my purse. Not only should you be wary of large crowds, which you really can't avoid in places like Bourbon Street, but you'll be hounded by homeless people begging for money. They aren't aggressive in a physical sense, but they won't give up with a simple "No" and might follow you for a while, begging even more desperately.

Hurricanes and flooding are the biggest concerns here. If there is a hurricane approaching, get out of town or cancel your trip. NOLA is below sea level, and even heavy tropical storms can cause a lot of problems. Tornadoes and thunderstorms can happen too. Hurricane Season runs from June through November, with a heightened alert from August to October.

Robbery rates are nearly four times higher than the national average, and that number has gone up since the official data reported in 2020. While many robberies are in bad neighborhoods among people who know each other, there's always a risk if you walk down the wrong alley or are showing off valuables, you could be targeted. Treat this with a high risk.

NOLA is always considered a top potential target for its booming economy and wild lifestyle. There's a lot of law enforcement presence from Homeland Security down to the local level, but you'll need to be vigilant and attentive during your stay. Every lit bit of information can help.

You should also treat this with a high risk because a lot of people here are looking to make money, and they are in your face about it. Don't ask anyone on the street to take your picture because they might try to charge you for it before giving you your phone back. If you are approached by someone who seemingly wants to "give" you a shot, they'll demand a payment - up to $20 a shot - on the spot. Don't trust anyone who isn't part of the tourism industry, like a concierge or business manager. Tip kindly for good information.

I'm a woman, and I've gone to NOLA several times, once alone and twice with female friends. Even on a Sunday morning at 8:00 am, I was harassed by endless homeless people wanting food and was cornered at one point. I didn't feel unsafe, but I felt incredibly uncomfortable. After dark, stay on well-lit streets. I know that's a cliche, but it is SO true here. There are too many alleys and dark corners here to feel safe at night. Always travel with a buddy if you can.

The 2021 Water Quality Report shows one violation that wasn't an emergency and was resolved. All other standards were fully compliant. If there is any flooding before or during your visit, don't use tap water until you confirm there isn't a water quality issue. You can also follow @SWBNewOrelans on Facebook to keep up with water quality information.NOTE: The Mississippi River was at historic lows in late 2022, which impacts many cities along the route - including New Orleans. This could affect water quality, as salt water from the Gulf is pushed into the riverbed. There's no end in sight for the record low river levels, and you should check the status before you arrive. For tourism questions on the river, email internet@neworleans.com.

Neworleans.com is the official tourism website for the city, and I strongly recommend using this website for attraction information if you aren’t going through the website for a specific attraction.

There are just too many potential third-party scam sites out there.

When you’re in Jackson Square near the French Quarter, you’ll be drawn to the Cabildo and St. Louis Cathedral.

Even if you aren’t a religious person, it is worth taking a peek at the intricate work of this stunning house of worship.

The Cabildo is a museum full of New Orleans’s history and artifacts.

I don’t want to ruin the tour, but you will be amazed at the history of this building that has been here since the late 1790s.

The National World War II Museum might now have the vibrant atmosphere you expect in NOLA, but it’s a treasured piece of history honoring the great veterans who served and sacrificed in the war.

The Audobon Zoo and Aquarium of the Americans give you a two-for-one tourism experience since they are right next to each other.

They do have separate admission prices.

Be sure to check the schedule closely because prices are different each day, and you’ll save money the earlier you book.

These are located in the Garden District, so you can also explore that unique area before or after your adventure.

Seeing NOLA on a tour gives you the safety of a group and the experience of a local to learn more and make the most of your time.

There’s literally a tour for everything here.

You can get tours of Mardi Gras warehouses where the preparation is always underway for the next celebration.

Steamboat tours are available on the Mississippi River and can be just for a jazz cruise and dinner or take you to plantations.

I took the Steamboat Nachez tour, and I loved it.

We had a great lunch with sunny skies and plenty of time to explore a plantation with a really funny tour guide.

The only tour advice I would give is to check your bank statements after the charge clears.

We had one ticket charged multiple times, and whether it was a simple error or intentional, we were able to get the situation resolved.

Even if you don’t take the Mardi Gras tour, you can still visit Mardi Gras World near the riverfront.

Self-guided tours are available for safety and convenience.

This attraction even offers an on-demand free shuttle to get there and back to your hotel!

Places to Avoid in New Orleans

Anyone who knows about Hurricane Katrina knows the 9th Ward and Lower 9th Ward were devastated when the levees failed, and the neighborhood still hasn’t and probably never will recover completely.

Do NOT go there to treat it as a tourist opportunity.

It’s also not the safest place, especially if you are there for that insensitive reason.

The 7th Ward is also a dangerous part of town you have no business being in.

The tourism guide for NOLA lays out all the options you have, and if you start driving around aimlessly, you’re likely going to end up in a dangerous neighborhood.

In some parts of the city, the danger is on a block-by-block basis.

A good rule of thumb is to avoid the neighborhoods around I-10.

I have been to NOLA for work projects, and quite honestly, so neighborhoods just made me sad and wondering what we can do to help underserved communities.

Here’s a bit of information that comes from the simple act of sharing information – not from a viewpoint one way or the other.

The proliferation of Airbnbs and other short-term rentals has taken over many neighborhoods.

This has forced out people who call them home because landlords realize they make more money off ongoing tourism than rental residents.

The complaint from neighbors is that this is ruining communities and driving out generations of families that call a certain place home.

This is just something to consider if you are looking at a short-term rental instead of one of the many hotels.

So... How Safe Is New Orleans Really?

New Orleans is facing both a police officer shortage and rising violent crime rates, including an increase in homicides that is staggering in 2022.

Here’s one example – in the 24 hours of Labor day, three people were killed in five shootings, four armed robberies happened, along with five carjackings.

The police department is also struggling to find enough officers needed to keep the community safe.

In a new step, the department is now looking to hire dozens of civilians to take over some less dangerous parts of the policing requirements, like parking tickets and paperwork.

Overall, from 2020, which is the last year NOPD gave official crime data:

I’m from St. Louis, so dangerous cities aren’t really going to phase me much.

I know how to handle myself, and I know the places to avoid.

That said, New Orleans can be a sensory overload, and the moment I’d stop to admire a cool building, a panhandler would approach.

I turned around so many times from shady people arguing on a street that I lost count.

You just have to be completely aware of your surroundings at all times.

Stay confident and firm, and exude a “don’t mess with me” attitude without being mouthy.

Don’t give any signs you are so intoxicated you might be an easy mark.

As much as possible, stay with a group of people you know.

You can have a safe time in NOLA, whether it’s a family vacation or the height of Mardi Gras.

Just stay in the tourist areas and don’t let your guard down for a minute.

Be especially vigilant during parades because that’s when pickpockets will be working the crowd.

How Does New Orleans Compare?