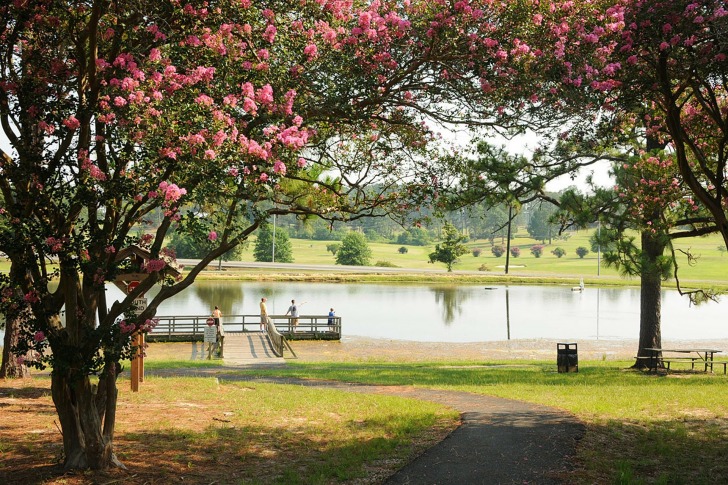 Shreveport is a relatively small city of nearly 200,000, in Northwest Louisiana, minutes from both Texas and Arkansas.

It is on the Red River where there are casinos on riverboats.

It has a rich history that includes gambling, prostitution, and a flavor of the old west.

Stately antebellum homes dot the city, and it is a gateway to gardens, trails, and parks.

It is a gateway to the great outdoors with a myriad of activities available.

It has the largest rose garden in the United States, and several museums, art galleries, and brewing companies.

The famed Red River District is not as lawless as it used to be but has many bars, restaurants, and late-night fun on the riverfront.

It is the gateway to the city aquarium and science museums.

There are several small specialty museums in the city as well.

Shreveport is not the safest city, with a crime and property rate that is higher than the national and state average. There is a lot of poverty, which generally means a higher crime rate. The city is safe during the day, and normal precautions are recommended. Some areas should always be avoided, but most tourist areas are safe.

While Shreveport does have a high crime rate, pickpockets are not common. The crime itself is not as profitable as it used to be, with fewer people carrying cash, and cards harder to hack. It is still a good idea to keep your possessions protected, and don't let anyone see your wallet or purse.

There are tornadoes occasionally but they are rare. Hurricanes could cause damage, but that doesn't happen here much either. There are no earthquakes, and even with the Red River, flooding is not common. There is very little risk here of a natural disaster. Rarely does it snow, and that causes more problems than anything else.

Shreveport has a high crime rate, and there are areas where it is not safe. The riverfront is a popular tourist area, and there is some crime there. It is not a good place to be at night alone, and you should avoid alleys or isolated areas where most crime happens. A little extra caution is good here, especially at night.

Shreveport has not had any terrorism and it does not seem like a target terrorists would like. There is some concern about domestic terrorism, and there is some gun violence. There have been very few mass shootings in this area.

There might be a fake ticket sold, and there could be some scams related to gambling since it is popular in this area. Apart from that, there are not a lot of scam operations being reported. Most scams are online operations aimed primarily at elderly people to steal their financial information.

Tap water is provided by the city and it meets or exceeds all state and federal standards. There are rivers, lakes, and deep wells that provide plenty of water for the city. There have been no significant issues reported as far as water safety.

Safest Places to Visit in Shreveport

The riverfront, or Red River District, is one of the most popular areas of Shreveport.

It can be dangerous, but it can also be safe.

During the day there should not be any problems, and if you are in a group you should be fine even at night.

The east side of town is the safest area according to residents of the city.

The southern parts of the city are also safe and they are heavily residential areas.

The Ellerby Woods area is one of the nicer parts of the city.

Hyde Park, Western Hills, and the Lakeshore Shopping Districts are all said to be safe areas in the city.

Parks and natural areas of the city are also safe areas.

There are a lot of natural areas around the city that are also safe places to visit.

Places to Avoid in Shreveport

The corridor along Interstate 20 is a high crime area, which is not a great distance.

The area where Interstate 20 meets Interstate 49 is also a high-crime area.

The area west of Interstate 49 is a poorer area that also has a lot of crime.

The area west of Jewella Avenue where it intersects with 49 has a high violent crime rate.

The riverfront is safe during the day, but there is a lot of property crime, especially at night.

Bossier City is surrounded by Shreveport but is its own city.

It has an even higher crime rate than Shreveport, so extra care should be taken there as well.

The northern part of the city also has a lot of property crime even during the day.

Car theft is relatively common in that area, and there are not a lot of attractions there.

Safety Tips for Traveling to Shreveport

So... How Safe Is Shreveport Really?

Shreveport’s crime rate is very high, and while you could probably visit it without trouble, it is not the safest city.

Wallet Hub ranked it 148th out of 182 cities studied for overall safety, including crime and environment.

Extra care is needed if you visit this city because of both property and violent crime.

While it is an interesting city, it is hard to call it safe.

The crime rate has gone down some since the high it reached in 2017, but it is still very high.

Shreveport is double or even triple the national average on many individual violent crimes.

There are 35 per 100,000 people murdered each year in Shreveport, while the national average is five.

There are 133 rapes and the national average is 42.

Auto thefts, which have gone down significantly, are at 648 per year and the national average is 219.

The national average is 178.

It has gone down some since 2016, but it is still very high.

Theft is the most common crime overall, accounting for 65 percent of all crimes.

Burglaries are second at 15 percent.

How Does Shreveport Compare?