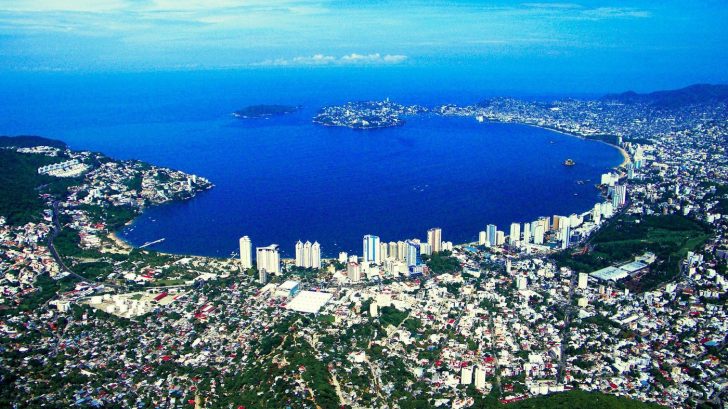 Acapulco is a city and main seaport on the Pacific coast of Mexico, located on a deep bay and it has been a port since the early colonial period of Mexico’s history.

Not only is it attractive due to the cliff divers who perform their impressive jumps, but also because of the fabulous beaches that are in the bay area.

The resort is divided into three areas: the “traditional” area, from Parque Papagayo to the beaches of Caleta and Caletilla, the main area known as “Zona Dorada” and the south end, “Diamante”, with luxurious hotels.

If coming to Acapulco, do not miss to see the fortress El Fuerte de San Diego, as well as the Acapulco’s History Museum.

The crime level in Acapulco is high, but resort areas and tourist destinations are not prone to violence and serious crime. However, drug-related violence has been increasing in Acapulco, so tourists should be vigilant in their safety. You need to bear in mind that pickpockets operate everywhere.

Public transport is dangerous due to the constant theft of buses. Unlicensed taxis are also risky because there have been reports of passengers being assaulted and robbed by unlicensed drivers. If the taxi is unmetered, agree on the price before entering. It is unwise to try to drive in Acapulco since the traffic is heavy and drivers are very aggressive.

Acapulco is prone to earthquakes, which might occur almost every day, but because they are not too strong, most visitors never notice the tremors. Other natural hazards rarely happen and there is no serious risk.

There is a great risk of short-term kidnapping, where victims are forced to withdraw money at an ATM to be released. To avoid more serious consequences, it is advisable not to resist and give the criminals what they want. You should pay close attention to your security at all times and know that risks exist everywhere.

Even though there are shooting incidents within the country, terrorist attacks are not expected to happen here. Nevertheless, they can never be predicted, so you need to be vigilant.

Travelers are often fooled by some criminals who pretend to be police officers. The most frequent scam danger comes from local police who accept a bribe and there is a high probability that you will be stopped and blamed for the thing that you have not done, to give them money.

Acapulco is a safe city when it comes to female safety, but it is important to stay alert at all times while walking the streets of Acapulco.

So... How Safe Is Acapulco Really?

Acapulco attracts tourists with its sandy beaches and vivid nightlife, so it is considered a very popular tourist destination.

People interested in water sports, parties and delicious food find all their pleasures in one place.

All the areas frequented by tourists are prone to pickpocketing and bag snatching.

Your bags and valuables should never be left unattended while at the beach.

The level of violent crimes in the city is low for tourists, so they can walk around without feeling threatened.

However, Acapulco is known for the crime and violence, against the gangs and cartel members, so it is advisable to always be aware of your surroundings.

The National Security Department is doing its best to improve its strategy to fight crime more efficiently and they emphasized 20 dangerous zones in Acapulco.

Some of these known for homicides, car stealing, and guns are Ciudad Renacimiento, Progreso, Center, and El Coloso and they should be avoided.

Besides all these threats, tourists visit the city and enjoy its beauties without any trouble, so do not miss the chance to go there if you ever get it.