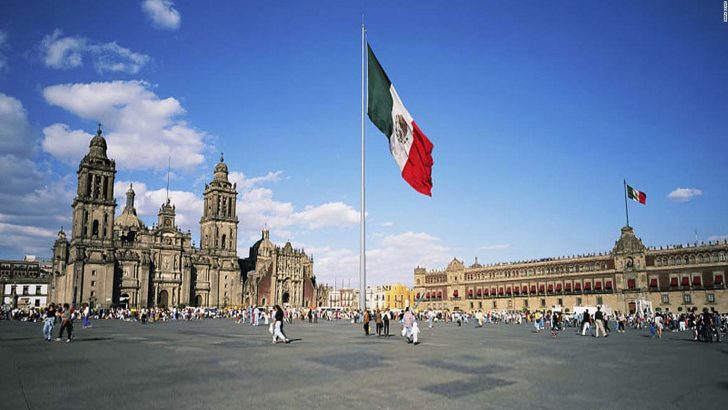 Mexico has a lot to offer, from beautiful beaches, mountains, canyons, and rich cultural life from a diverse group of influences.

There is something intriguing for everyone.

Ancient Mayan and Aztec ruins, as well as some amazing colonial architecture, is itself a major reason to visit Mexico.

In the south especially, there are gorgeous beaches with clear blue water complete with a thriving nightlife.

While Cancun is the major tourist attraction, there are beaches just as nice that are not as developed or crowded.

In some cases, you can find more than one attraction in the same area, such as beaches, ruins, and lots of variety in Mexican culture.

From major cities to out-of-the-way hamlets, Mexico is the neighbor you should want to get to know.

The U.S. Government advises people to "reconsider travel" to Mexico, which is the third-highest of four levels of danger.Covid-19, as well as a rise in crime and kidnappings, are the major reasons.Like many countries, some areas are safer than others.Major tourist areas are generally safe.The overall crime rate per thousand people is actually higher in the United States than in Mexico.

You need to use some common sense.Don't accept rides from independent drivers.Ride only in approved or licensed taxis, which are labeled.Get your hotel to call a taxi for you, instead of hailing one on the street.Public transportation is safe but can be crowded and uncomfortable.Generally, it is much safer than renting a car and driving yourself.

This is especially true in tourist areas, where people look for easy targets.Try not to look like a tourist.Don't flash your money or expensive electronics around in public. Keep your valuables locked up and carry as little cash as possible.Keep your papers and wallet safe.Tourist areas and large cities are the worst.

There have been earthquakes in mountainous areas, as well as hurricanes along the coast, but it is rare to have a major disaster in Mexico.Keep an eye on weather forecasts as you would at home.The infrastructure in Mexico is not that great, so if there is one, it may be worse than if you were at home. Even so, they are rare here.

Robberies and muggings are on the rise in certain areas.Even so, tourist areas are generally safe during the daytime, as is most of the country.If you stay at a resort in a tourist area, your risk is very low.If you are out at night by yourself in a city, your risk increases dramatically, just as it would in the United States.

According to U.S. Govt reports, there is no evidence of foreign terror groups having a base in Mexico or working with drug cartels.There have been very few incidents of terrorism in recent years and those were isolated cases.While terrorism could happen anywhere, there seems to be little risk of it happening in Mexico.

Especially in tourist areas, scammers are on the prowl looking for a victim.Fake taxis, fake tour operators, souvenirs, and timeshares seem to be the most common scams.One very common scam is for restaurants to have a different menu and prices for tourists than what locals get.You won't get much help from the police if you are scammed, so you need to be careful.

We say low because it really is not any different than in the United States.If you stay in tourist areas, use some common sense - don't go out at night alone - there is little danger.There have been some kidnappings, so that could be a danger.It is not good for a woman to be away from tourist areas alone for that reason.

"Montezuma's Revenge," causes most tourists who drink water to get sick for a day or two.Some are just different minerals that you could get used to. Water is contaminated in many areas, however. Ice at a restaurant may come from tap water.You will get sick from tap water, but it is not fatal or serious in most cases.

Safest Places to Visit in Mexico

The safest place to visit in Mexico is Cancun, or anywhere along what is called the Mexican Riviera.

The area of Yucatan is built for tourists and it is safe for that reason.

You can also take guided day trips from there to see the Mayan Ruins of Chichen Itza or Tulum, which are also safe.

Cozumel is a tiny island near Cancun that is also a tourist haven, as well as a snorkeling paradise.

The historic center of Mexico City is also a fabulous place to visit and is safe as long as you don’t wander about at night alone.

Merida is a large Yucatan city that is often overlooked by American tourists.

It has a great colonial heritage, beautiful streets, and squares.

It is close to the ocean, with some beautiful underdeveloped beaches.

Placess to Avoid in Mexico

Cities that border the United States are considered unsafe because of drug cartels.

Ciudad Juarez, across from El Paso; Tijuana, south of California; Reynosa, which borders Texas, and Ciudad Obregon near Arizona, are all considered unsafe.

Do not travel there alone and exercise extreme caution.

The U.S. Government has issued a “do not travel” designation for Mazatlán, Acapulco, Matamoros, and Nuevo Laredo.

The “do not travel” designation is because of increased violence, drug cartel activity, and Covid-19.

Generally, the southern part of Mexico is much safer than the northern states.

The states of Sinaloa, Nuevo Leon, Guerrero, and Michoacan all have “do not travel” advisories from the state department.

Some resort cities on this list are unsafe outside the resort, but nearly all resorts themselves are safe for travelers.

Safety Tips for Traveling to Mexico

Try to blend in as far as clothing, wherever you are.

Don’t flash expensive electronics, jewelry, or cash around where a pickpocket might see it.

Don’t be an easy mark.

If something feels off or scary, don’t hesitate to run away.

Your intuition is probably right, and even if not, better safe than sorry.

While most areas are safe, there are bad people everywhere, so if your radar is going off, it is doing so for a reason.

Stay alert and aware of your surroundings.

Make safety your top priority, no matter what else you are doing.

Public transportation and taxis are safe, but nothing beats Uber as far as safety goes.

When it is available, it’s safer than public transportation.

These are operated by well-trained guides and drivers, and they have a lot of tours to choose from.

Don’t take a tour with some guy on the street making an offer.

It won’t kill you, but it will make you very sick for a day or two.

Some of it is just the minerals in the water that we are not used to, but there are also contaminated systems in Mexico.

This is especially true for women, but it’s dangerous for men too.

Unlike the United States, the culture and tourist areas are downtown in Mexico.

Look for the “Centro Historico,” which is the major tourist area in town.

These areas cater to tourists and the government helps keep them safe.

You don’t need to be fluent, but knowing some words will help.

If people see you are trying to speak their language, they are more likely to offer to help you.

Be aware of where you are.

Mexico City, for instance, is at a high elevation and that can give you altitude sickness.

The southern areas are hot, so drink plenty of water.

So... How Safe Is Mexico Really?

There is no place on Earth that is safe all the time.

Bad things can happen, and that is what makes the news.

In reality, Mexico is as safe as the United States.

Forbes Magazine interviewed an FBI agent who worked in Mexico, and he said the country is safe if you use common sense.

A website compared crime statistics between Mexico and the United States and found Mexico to be less dangerous in many statistical categories.

Driving a car in rural areas alone is also unsafe.

The Mexican government makes a lot of effort to keep it that way.

Even in dangerous areas, you should be fine at a resort as long as you stay at the resort.

How Does Mexico Compare?