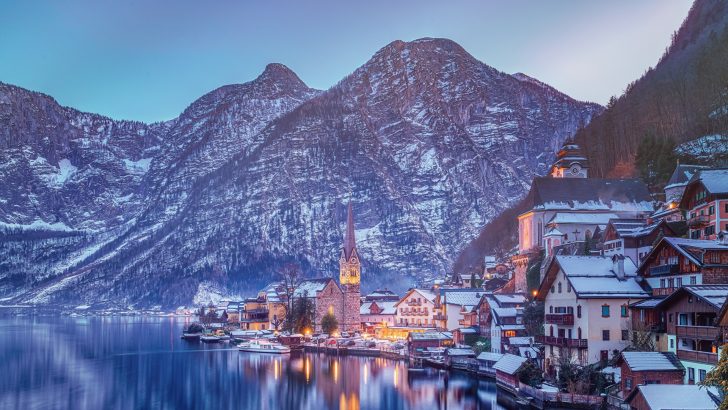 Snowy Austria is not just a dream vacation for skiing and winter lovers: it is a small, modern country located in Central Europe bordering Switzerland and Liechtenstein to the west, Germany and the Czech Republic to the north, Slovakia and Hungary to the east and Slovenia and Italy to the south.

Since it’s a landlocked alpine German-speaking country, the first thing that comes to mind is the snowy mountains and German beer: but it is so much more than that.

Its capital Vienna is one of the cleanest capitals in Europe, filled with cultural facilities and museums as well as baroque streetscapes and imperial palaces.

It is also considered one of the safest countries in the world.

Generally, Austria is a very safe country to travel to. According to some sources, Austria is ranked 3rd on the list of safest and most dangerous countries in the world. Still, never let your guard down in a strange country.

Generally, transportation in Austria is safe and reliable. Be careful on public transportation since that's where pickpockets might try and steal from you.

Pickpocketing and bag snatching are common in tourist landmarks and crowded areas but the issue is nowhere near serious. Just be vigilant at all times and never leave your belongings in plain sight.

In alpine areas of the country, there are some risks of avalanches and mudslides. If you are traveling to this area of the country, closely monitor the weather conditions and tell someone about your pending whereabouts. Always follow the signs and the advice of the authority.

You shouldn't worry about being mugged or kidnapped in Austria, since it rarely, if ever occurs.

There was one terrorist attack prevented in Vienna, in 2016. The threat of terrorists trying to execute an attack in Austria exists, but is relatively low.

Just like anywhere else, tourists will always be targeted for scams. Always check every change twice, negotiate everything in advance and be wary of strange people offering you help or trying to distract you, as it might be a trick to steal from you.

Women traveling solo are completely safe in Austria. If you have your wits with you and follow your common sense, avoid dark and desert alleys or walking alone with strange people at night, your trip should go smoothly.

So... How Safe Is Austria Really?

Austria is often considered one of the safest countries in the world.

Its robbery, assault, and car rates are among the lowest in the developed world, while violent crimes rarely occur.

What differentiates Austria from other countries is that even the small towns and uninhabited areas such as forests are very safe at any time of the day.

However, it is not without its dangers and you shouldn’t let your guard down: pickpockets do exist, even though they’re not common, so beware in crowded places.

Their skills are excellent and they’re getting increasingly professional.

Bicycle theft is also an issue in bigger cities but rarely happens in smaller towns.

Always lock your bike to an immobile object.

The ring road called Ringstrasse, known to the Viennese as the “Innere Stadt”, is where a vast number of historical landmarks of Vienna are located, such as the Hofburg, the former Habsburg palace that houses the National Library, the Spanish Riding School, as well as six museums, so naturally it’s where the pickpockets rally.

Another area that can attract pickpockets is the busy square Karlsplatz in Wieden where tourists gather in large numbers to see the Karlskirche church.

However, this place, however attractive during the day, becomes a gathering place for drug addicts at night.

You should also watch out in The Prater, a family amusement park that can be frequented by criminals and scammers.

How Does Austria Compare?