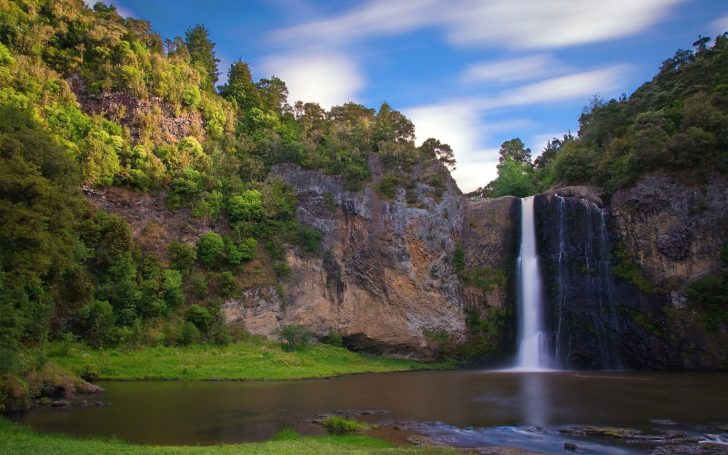 Consisting of two main islands: North Island and South Island and many smaller ones in the South Pacific Ocean, the archipelago of New Zealand is located about 1,600km southeast of Australia.

It is a country that boasts a diverse natural beauty: breathtaking mountains, pasture lands, and vast lakes, rivers, and beaches.

The islands of New Zealand are one of Earth’s most peculiar bioregions since they are inhabited by flightless birds seen nowhere else in the world such as the kakapo and kiwi.

The latter is not only the national symbol of this country but also the name New Zealanders usually call themselves.

The islands are sparsely populated, particularly away from the North Island, but the developed traffic throughout the country make them easily accessible.

They are filled with modern facilities, and excellent transport networks and well-maintained highways.

It is a dream country for any tourist, and very safe to visit, too.

New Zealand is, overall, a very safe country to visit. The crime rates are low, and the crime that does exist is mostly petty theft and bag snatching.

Transportation is generally very safe in New Zealand. Still, be cautious in public transport, because this is where pickpockets usually operate.

Areas frequented by tourists, especially in Auckland, are known to be affected by pickpockets. Take basic precaution measures and keep your valuables in a safe place.

When it comes to natural disasters, New Zealand is known for earthquakes. Also, there is a number of active volcanoes, and occasional eruptions may take place. Another issue in New Zealand are huge insects with a scary physical appearance that isn't dangerous, and some dangerous, venomous ones called “redback” and “kapito”.

An occurrence of mugging or kidnapping is not likely in New Zealand. Mugging is extremely rare, but the chances still exist, in remote areas and the outskirts of big cities. In such a situation, never resist and hand over everything you own immediately.

There haven't been any terrorist attacks in New Zealand's recent history, but they shouldn't be ruled out, so be aware of your surroundings at all times.

There are a couple of scams that are well known throughout New Zealand, such as the lottery winning scam where you receive a letter saying you won a lottery prize, and if you want to collect it, you have to pay a certain fee. In order to collect your winnings, you are asked to pay a fee. Another scam is the Inland Revenue scam where scammers claim to be from a certain legal establishment and call people saying that they are being investigated and have to pay a tax or go to jail immediately.

Female travelers shouldn't have any safety problems in New Zealand, even though sexually motivated crimes are on the rise. Just use your common sense, never find yourself alone in deserted or poorly lit areas and avoid any remote places.

So... How Safe Is New Zealand Really?

New Zealand is a safe country to travel to.

Its crime rates are similar to those of other western countries.

Petty crime and theft are definitely the most common types of crime.

However, if visitors take simple, precautions expected during any trip such as keeping their valuables out of sight or in a secure place and locking doors of vehicles, even in remote locations, their trip should go without any problems.

There is some violent crime, but it is not too common.

It usually happens at night, in public places and is generally associated with alcohol or illicit drug consumption.

Tourists are advised to avoid groups of young intoxicated people in city centers, or any kinds of rowdy groups, especially late at night and in the early morning.

Another fact worth knowing is that New Zealand has one of the lowest recorded rates of gun crime in the world.

There have been some high profile media reports of tourists being targeted in random violent robberies and sexual crimes, but these crimes are unlikely to happen and even when they do, they happen in more isolated places, unfrequented by visitors.

You should avoid any deserted, abandoned places, just in case, even though the chance of falling victim to such an occurrence is still low.

How Does New Zealand Compare?