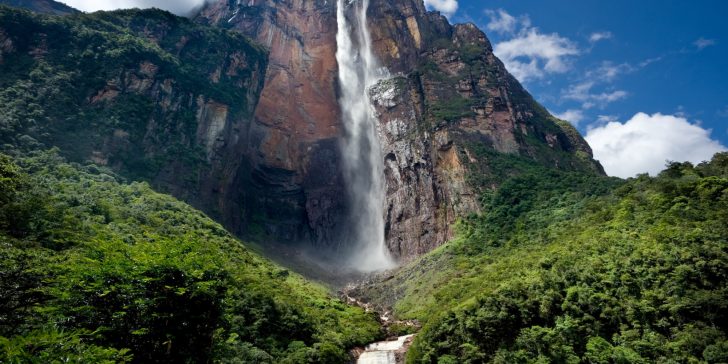 Venezuela is a country located in South America with a shoreline along the Caribbean Sea and the North Atlantic Ocean.

It shares its borders with Colombia to the west, Guyana to the east and Brazil to the south, and it’s located in a manner that connects North and South America, right on the main sea and air routes.

Right off its coast sit the islands of Aruba, Bonaire, Curaçao and Trinidad, and Tobago.

Venezuela, although not the safest of countries, really has to offer an abundance of gorgeous sights and activities, like the Angel Falls that sit in the Guiana Highlands, and that is the world’s highest waterfall.

It is no wonder that this is of Venezuela’s major tourist attractions.

Tourists also love to visit its coastline which is the longest coastline on the Caribbean sea.

Don’t forget that Venezuela is the world’s fifth-largest oil exporter with enormous reserves of natural gas.

Ecologically, Venezuela is extremely diverse with more than 40% of its national territory being covered by protected areas.

Venezuela is not safe for foreigners. Keep that in mind while you plan your trip to your country, remain vigilant at all times as both petty and violent crimes exist in abundance here. Apply maximum possible precaution measures.

Pickpockets operate mostly in buses and subway stations so be careful. Know that the roads are also extremely dangerous as carjacking is a regular occurrence. Buses and trains are also known for robberies.

Pickpockets are virtually everywhere in Venezuela. Pickpocketing and bag snatching are the most common forms of petty crime. Refrain from wearing anything remotely valuable outside.

As for the natural disasters that hit Venezuela, you can expect floods, earthquakes, and hurricanes. Floods are expected mostly in the period between May and December while the hurricane season lasts from June to November.

Violent crimes are also the norm here, and kidnappings as well. There's a new expression developed in this country, "express kidnapping" which means foreigners being kidnapped and possibly tortured until they use their credit card to empty their account and give their money to the muggers. Be extremely careful everywhere.

There haven't been any terrorist attacks in Venezuela's recent history. However, they shouldn't be ruled out, so be aware of your surroundings at all times.

Be wary of the so-called "virtual kidnappings". Locals in Venezuela generally never complete questionnaires or surveys because they're actually scams devised in order to collect information on you and your family members. Also, don't fall for the airport tax scam: be careful not to get overcharged when paying airport tax for both international and domestic flights.

Many women have traveled to Venezuela without having negative experiences. The fact is, it is no more dangerous to women than it is to men. However, do not walk alone, especially after dark, as you might be perceived as an easier target to muggers and robbers.

So... How Safe Is Venezuela Really?

You should know that Venezuela is not safe for tourists.

The US State Department has released an issue for all tourists to reconsider travel to Venezuela due to crime, civil unrest, poor health infrastructure, and detention of U.S. citizens.

There are numerous areas that are extremely dangerous.

Avoid traveling to certain neighborhoods of Caracas due to crime.

Places, where tourists are relatively safe, are the main tourist areas, but that’s it.

The situation is critical in this country: it has one of the top five highest per capita murder rates in the world, kidnappings that have increased as much as 50% within a period of one year, from 2008 to 2009, while armed robberies are the norm.

Kidnappings of foreign nationals also occur and people have been taken from homes, hotels, unauthorized taxis and airport terminals.

In the past couple of years, an expression “express kidnapping” has developed.

The expression basically refers to short-term opportunistic abductions, with a goal of extorting money from the victim.

Victims are selected randomly and held while criminals force them to use their cash cards to empty their bank accounts.

Once they get the money, they release the victim.

It doesn’t last more than an hour, but it is commonly followed by violence and is generally a terrifying experience.

You also have to be extremely careful on the road, where you are more exposed than in your home.

Carjackings happen both during day and night.

Do not rent or drive an expensive-looking vehicle as they are targeted and attract attention.

The carjackings are executed by armed gangs ramming the victim’s vehicle from behind, or flagging them down in order to rob them.

Whatever you do, don’t resist – it can end in them shooting the victim dead.

How Does Venezuela Compare?