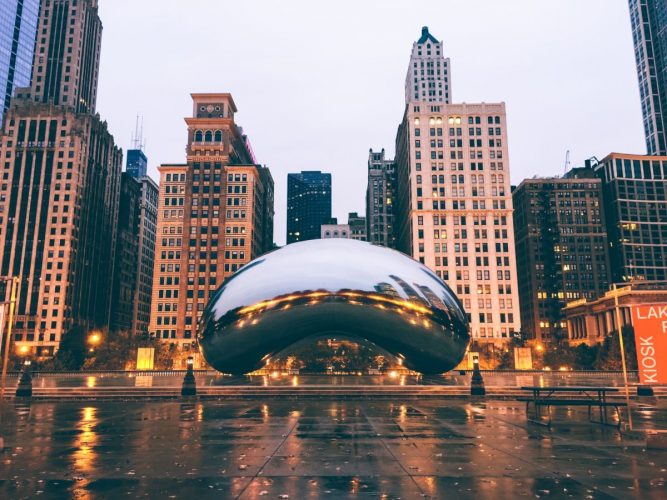 Chicago, Illinois, on the west side of Lake Michigan, is one of the most dynamic and cultural hubs in the United States.

This city is rooted in a wealth of history but is also an ever-evolving ecology of art, fashion, trends, and foods.

Whatever you call it – Chi-town, The Windy City, “Chicawgo” – this is a place where you can go from the beach to Broadway to Bloomingdales in a small radius.

In fact, visiting Chicago in the summer will give you a completely different experience than visiting in winter.

The city has so much history, including the incomprehensible storyline of Devil in the White City, that you shouldn’t miss one of the tours by bus, boat, or foot.

You’ll learn why the Chicago River flows backward, where the mob bosses hung out, and what sweet treat was invented here.

With more than 40 neighborhoods to explore, you won’t be able to fit everything in.

The Loop is one of the top draws, being the central business district for the city of nearly three million people.

There’s a neighborhood for various cultures, from Chinatown to Little Italy to Beverly (an Irish neighborhood).

A trip to Wrigleyville might just have you leave Chicago as a Cubs fan.

Wicker Park will feed your inner artist, and the Magnificent Mile is a shopping paradise known globally.

There's a medium overall risk in Chicago, and some neighborhoods rise to high risk. Chicago is notorious for its gun violence and gang crimes, which are being fueled by increased gun crime across America and the nationwide opioid epidemic. While there are a lot of websites that might scare you away from Chicago, we just want to prepare you for a safe trip. However, even Conde Nast readers say Chicago is the Best Big City in the U.S. to visit.

You could spend a whole day learning all the ways to get around Chicago. The Chicago Transit Authority oversees rail lines and bus routes throughout the city. You'll use the Metra Rail to get to the Chicago suburbs. Taxis and rideshares are waiting around the corner everywhere. You can also use a water taxi or rent a bicycle to see Chicago on two wheels.

There's a high risk of being pickpocketed or having a purse snatched in Chicago, with an average of 2500 happening a year. During COVID, the rates went down, but CTA has officially issued a pickpocket warning again in 2022. Pickpockets are always in the crowd waiting for a tourist to make one small mistake. They might bump you on a crowded street or go as far as to provide "help" while having another person waiting for your distraction to lead them right into your pocket.

This is a medium risk as Chicago can get severe weather, including tornadoes and massive winter storms. You should always have a weather app with notifications enabled and know where a safe place to go is in case of a tornado. Most hotels will have a designated area.

The robbery rate is more than three times the national average, and there's a medium risk it will happen to you. To lower your risk, stay off the streets at night. Never walk down an alley or side street. If you have a bad feeling about a group of people, move to the other side of the road or go into the nearest business. Should you be a robbery victim, don't fight back. Just do what you are told and remember as much as possible to be a good witness.

There's a high risk in Chicago as it's one of the largest metropolitan areas in the country. Former Deputy U.S. Marshal Ed Farrell told ABC7 in Chicago, "They're (terrorists) looking for events with mass casualties to further them. So that's why Chicago is such a priority." Chicago was on the original list of the 9/11 attacks, along with Los Angeles, added by Osama bin Laden himself. However, the list was whittled down to the New York and Washington targets. With this risk comes an abundance of Homeland Security and military oversight for the security and safety of residents and visitors.

Everyone has a hustle in Chicago, and there's a medium risk they will come after you. Scammers in Chicago can be brisk and pushy, so stand up to them and avoid anyone trying to sell you a ticket or trinket on the street. As much as you might want to help someone in need, you should assume anyone who is begging for help is really trying to scam you. It's a sad statement, but you've got to protect yourself in this urban jungle.

Women should proceed with medium risk and avoid going out by themselves - especially after dark. Staying in groups or pairs will give a better sense of safety and avoid making one person more of a target than another. Have a secret word you use with a friend if one of you feels uncomfortable and needs to leave. When enjoying the nightlife, you can ask the bartender for an Angel Shot. This is a signal that you are being harassed and need help. They will handle the situation from there.

The 2021 Water Quality Report shows all standards were met in all categories tested. The city also does more than 600,000 water analyses a year. You might read about the danger of lead in drinking water, and this is due to the pipes of a building or structure, not the water itself. The city is working to replace aging pipes. If you are staying at an older hotel, you might just want to use bottled water for drinking to be safe.

Safest Places to Visit in Chicago

The Choose Chicago website offers many ideas and suggestions for all seasons.

Since there’s so much to do, we can’t explore all the options here.

Let’s go through some of the highlights.

A CityPass is a great way for first-timers to explore the city.

This gives you deep discounts on five of the top attractions in The Windy City.

Then you can choose from two of the following:

There are other CityPass options, so you can choose the one that’s right for your family.

Taking a boat tour of the city is one of the staples of Chicago tourism, and you have many options to choose from; plus, there are bus tours with open-air double-decker styles for maximum enjoyment.

I was 12 years old on my first tourist visit to Chicago, and I was mind-boggled that there were beaches in the land-locked state, much less beaches right in front of the massive city landscape.

Chicago also has an array of major league sports teams, including the Cubs, White Sox, Bears, and Blackhawks. Chicagoans are a devoted fan base, so any game will be an exciting experience.

It can be overwhelming to see the number of theater performances in Chicago but to secure your transaction, explore BroadwayInChicago.com.

It will save you hours of searching and allow you to select show tickets at various theatres.

You’ll be amazed at all the dining options in Chicago.

It’s funny the little things we remember as children because I was five years old when my grandfather passed away.

My family went for a quick trip to Chicago for the funeral, and I vividly remember my cousin taking me down a stone staircase, and I was staring at the tallest pizza I’d ever seen.

The Chicago Deep Dish Pizza is something you just have to experience.

Being from St. Louis, our claim to fame was the ultra-thin crust, so this thick pie was just mesmerizing.

Other foods to try include:

Places to Avoid in Chicago

It’s hard to give neighborhood-specific places to avoid because there are just so many neighborhoods here.

The city has more than 2.7 million people in it.

So, as a general guideline, south of I-55 and anywhere north and south of I-290 is a more dangerous part of town.

The west side has higher crime rates until you get into the more suburban areas.

Crime data can tell one story, but there are also people who know the city best and want you to have a great time.

These are the concierge and front desk attendants at your hotel.

They can give you street-by-street specific advice.

You can even consider tipping them a large amount upfront in exchange for ongoing help, or if they’ve been very helpful, tip them well at the end of the trip.

If you don’t carry cash tips, many tip-based workers have Venmo or CashApp, so you can easily leave a tip through a secure transaction.

Avoid being out after dark and just walking around.

Plan where you are going before you leave, and get door-to-door service with taxis or rideshares.

Having your own rental car sounds like a good idea, but there are a lot of safety steps to take so you can safely park in such a dangerous city.

Carjackings and thefts from cars are so common that police suggest you don’t even drive around with your purse on the passenger seat.

Instead, store it below your seat.

St. Patrick’s Day is a huge event in Chicago

That doesn’t mean avoiding the city during that time.

It just means you will experience higher prices, even larger crowds, and an incredible number of drunk people.

Just be prepared but also enjoy yourself, because this is one of the best events the city hosts.

Safety Tips for Traveling to Chicago

So... How Safe Is Chicago Really?

While most articles I can write, “It’s not as dangerous as Chicago,” obviously, that doesn’t work in this article.

Chicago had the most deadly years in a quarter of a century in 2021, and even pickpockets are making a raging comeback in the aftermath of COVID.

Anyone who isn’t used to the hustle of a big city and the inherent risks are going to feel overwhelmed and potentially scared while visiting here, but there’s really no need to avoid the city.

You need street smarts, situational awareness, and a balance of caution with calm to enjoy a safe trip here.

The vast majority of violent crime is among people who know each other, with a strong pull toward gang-on-gang crime.

“The last two years have been extraordinarily high when it comes to the rates of gun violence in our city,” Roseanna Ander, executive director of the University of Chicago Crime Lab, said.

“There’s a wider safety gap than there’s ever been in our city, between the most safe neighborhoods and the least safe.”

Chicago is a dangerous city, built for people with thick skin and a resilient spirit.

Stay in groups as much as possible while avoiding congested areas.

Always use the utmost safety, but even need to do that with caution.

If you keep patting your pocket or checking your bag, a savvy thief is going to notice you are targeting where your most valuable items are located.

One suggestion is also to carry a fake wallet loaded with scraps of paper, so if you do get mugged you can hand over the wallet without losing anything.

By the time the criminal realizes they’ve been had, you are long gone.

You can also make sure you carry a bag or purse with a zipper and keep it in front of your body where you can comfortably rest your hand on the seam.

Pay special attention to transition zones, like getting off the bus or train into a new section of town.

Don’t dress like a tourist since that will signal to crooks that you are not from here and likely carrying valuables on you.

If you are going shopping, do that last, so you don’t have to wrangle bags all day.

How Does Chicago Compare?