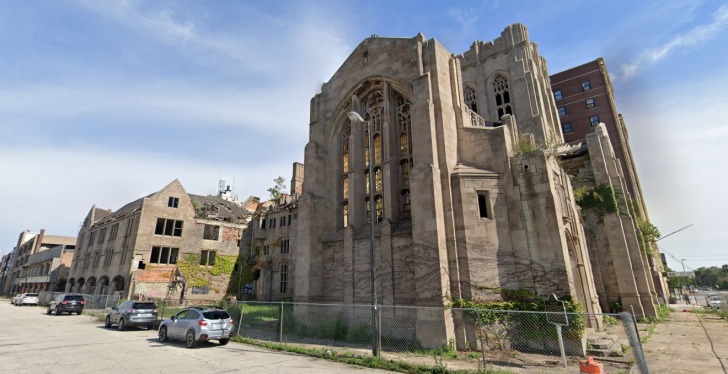 Gary, Indiana, was once a thriving steel town on the shores of Lake Michigan with 170,000 people.

That snapshot of a thriving community is gone and replaced with a city that has lost 61% of its population and is breaking records for all the wrong reasons, including gun-related deaths.

This is the city that brought the Jackson 5 to the world and the modest childhood home of the Jackson family still stands in tribute along with other homes in an otherwise nondescript neighborhood.

This is a working-class city with a third of its residents living in poverty.

This might be considered part of the Chicago area by some, as Gary is right across the Illinois state line and is just 30 minutes from downtown Chicago.

You won’t find any hotels in Gary, but there are several on either side of the city line.

Gary city leadership is taking all the right steps to rebuild, revive, and restore this community with the strength of the steel that is made here, but time will tell if these efforts are going to work.

For now, I’d really think twice about visiting Gary unless you have a pressing family or personal reason to be there.

The crime rates in Gary range from concerning to terrifying. The biggest concern is the homicide rate. 48 lives were taken in 2021 just in Gary and another 40 homicides were reported in surrounding Lake County. The oddities in some crime numbers here include a violent crime rate just 21% higher than the national average but a homicide rate 12 times higher. At best, there's a medium risk here, but it's really close to high risk.

Northwest Indiana is flush with public transportation options, including nearly a dozen routes via bus or rail to get around the area and the Chicago region. You can also call a taxi or rideshare. There's a medium risk due to the dangers of waiting at public transportation stops here. Having your own car is ideal, but also comes with its own risks.

The theft rate is one in 52 here, which isn't the lowest we've seen. The data provided by the Gary Police Department doesn't break down how many of those are pickpockets. There's a medium risk simply because we know there are a lot of guns in the wrong hands here and brazen criminals holding them.

You face extreme weather risks in all seasons, including flooding, severe thunderstorms, tornadoes, blizzards, and ice storms. There's a medium risk because of the potential, but there's nothing that won't come with plenty of warning.

The robbery rate is two and a half times the national average, so there's a medium risk here. Again, the gun violence increase in Gary and across Indiana and Illinois should make anyone ultra-protective of their belongings when visiting here. You should never fight back if confronted by a thief here. It's just not worth the risk.

At one time the city would've been a hard target due to the industrial footprint and proximity to Chicago, but for now, it's just the percentage of criminally-minded people who live in the community that really put it at risk.

There have been many reports of food stamp fraud over the years in Gary, but there aren't any specific ones that target a tourist. You should still consider it a medium risk because there's a lot of hustling on the streets of Gary to make a quick buck.

I would recommend that unless a woman or group of women have a reason to be here, they should find another place to visit. The sexual assault rate is the least of their worries, as it's slightly lower than the national average. That gun violence, though, is concerning and women don't want to be considered an easy target.

The water quality report from Indiana American Water shows there were no violations in 2021 and all water is safe to use. The water is hard, so if you're sensitive to the minerals in hard water, you should consider using bottled water for drinking.

Safest Places to Visit in Gary

From Lake Street and County Line Road, you can get to various activities on the southernmost shore of Lake Michigan.

The Miller Beach website is the best research tool to learn the lay of the land here.

There are five beaches, some open throughout the year and others seasonally.

Marquette Park and Nature Preserve spans five miles of the beach but also has more than 20 miles of trails for walking or bicycling.

There are some historical markers and statues along the way.

Be sure to check the wildflower guide if you’re visiting in warm months and another eye-catching feature includes the homes along the lakeshore.

There are restaurants and dining here, but this is no Boca Raton.

The stores are small, locally owned and operated, and can appear a bit sketchy.

It’s a great idea to talk with a local police officer or stop by the station when you arrive in town to ask about the safest parts of the beach area to visit, as the crime data I have access to doesn’t break it down that granularly.

During baseball season, you can catch a game at the USS SteelYard ballpark, home of the Gary SouthShore RailCats.

Places to Avoid in Gary

There just really isn’t a safe part of Gary for someone who doesn’t know the area.

The crime rates spread across the entire city and start to get lower to the west (which is all industrial), east (which is getting into another city), and south (which is a nicer part of the region).

For those who want to visit Michael Jackson and the Jackson 5’s childhood home, you should know it’s not a museum or anything you can tour.

It will take about five minutes to stand on the exterior of the house and chat with other visitors who might be there.

It’s in a regular neighborhood, so you might run into neighbors who are welcoming or frustrated with the crowds.

Use caution when visiting here and don’t make loud noise or overstay your welcome.

Be sure to visit in the daytime.

If you’re sensitive to air pollution, you should check the air quality before visiting Gary.

The industrial footprint here can cause respiratory issues and let off a nasty smell that permeates through the city.

Safety Tips for Traveling to Gary

So... How Safe Is Gary Really?

The biggest crime concern in Gary is homicides, and there’s really no escaping the numbers.

That’s also along with a drop in violent crime from the previous year.

Gary still holds the #2 spot for the city with the highest number of gun-related murders.

Gun violence is high here as well, with 183 non-lethal shootings reported, of which 21% were gang-rated.

The problem with Gary isn’t just the crime, it’s also the poverty, though some would argue those go hand in hand.

The police and city leaders are teaming up to offer guaranteed income and crime-free housing, but it’s not an overnight fix.

Add on top of that, there are safer places to stay very close to Gary while still being able to enjoy the amenities of the region.

Gary doesn’t even have any hotels in its city limits, which, quite frankly, is for the best.

If you’re just looking for a getaway on Lake Michigan, you can choose safer locations like the North Shore of Chicago, or St. Joseph, Michigan.

How Does Gary Compare?