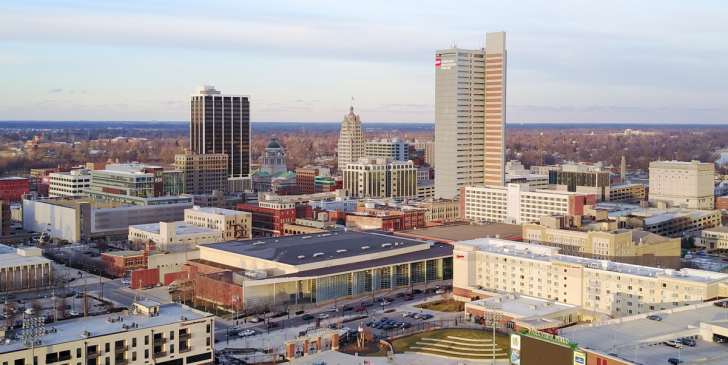 Fort Wayne is a city in the northeastern part of Indiana, a state of the United States of America.

Fort Wayne is a metropolitan city with a small community feel.

It is the regional commerce and industry center for Northeast Indiana and also impacts the economies of Southwestern Michigan and Western Ohio.

Fort Wayne has been and is a breeding ground for entrepreneurs and high tech industries.

The city has many historical buildings that usually offer regular tours.

The city itself has a long history going back to the 1700s but has lately succumbed to the urban sprawl so widespread in the Midwest.

The city is not very safe for tourists. It is not recommended walking on it alone and at a later time of the day. Avoid bars and any relationships with drug dealers. Use a taxi or your car to move around the city.

In the city, they often use their cars. Taxis are also recommended, especially if you return home late at night. Use only licensed taxi services or call the vehicle from the application on the phone.

Pickpockets operate in crowded places, at train stations, street markets. Be careful with those who are trying to attract your attention: offer or asking for help. These are usually methods to distract you from your pockets or bags.

This region prone to the potential for a variety of natural hazards, with ice storms in the winter, heat waves in the summer, and tornadoes, earthquakes, and flooding possible at any time of year.

Serious armed robberies are found here quite often. More often they are associated with the dismantling of drug dealers and rarely concern tourists. However, it is recommended to avoid any such gatherings, not to get involved in fights and not to walk alone in the city late at night.

Terrorists can try to carry out attacks in the Fort Wayne region. Attacks could be indiscriminate, including in places visited by foreigners. You should monitor media reports and be vigilant at all times. Study the political environment before your trip here.

Fraud is not very common in this region. However, there may be cases of minor fraud and telemarketing when third parties try to find out your data in order to obtain data about you and your credit cards. Be careful not to share this data with other people.

Women are not recommended to travel to this city alone. It's not safe enough here, especially at night. Do not attract too much attention to yourself and travel in the company of like-minded people.

So... How Safe Is Fort Wayne Really?

Fort Wayne is an average city in safety.

The crime index ranges from medium to low.

However, the city has a high level of drug trafficking problems.

Fort Wayne is a reasonably ordinary city with everyday life.

If you are here, then using common sense and the usual precautions will be enough to avoid serious risks.

The numbers of murders and assaults each year in Fort Wayne are low, and the majority are related to extended domestic violence issues or personal disputes between family members or friends.

Even street robberies and muggings are relatively rare as it’s safe to walk almost in the city at all times of the day or night.

The only things that are relatively “high” are property crimes and drug sales, and that’s to be expected for this size city.

You should be very careful in bars and watch your drink.

So that you do not pour anything to water and rob.

Do not get involved in street showdowns, and even more so in drug showdowns.

Drugs are illegal here, and severe punishment awaits you if you are caught with them.

How Does Fort Wayne Compare?