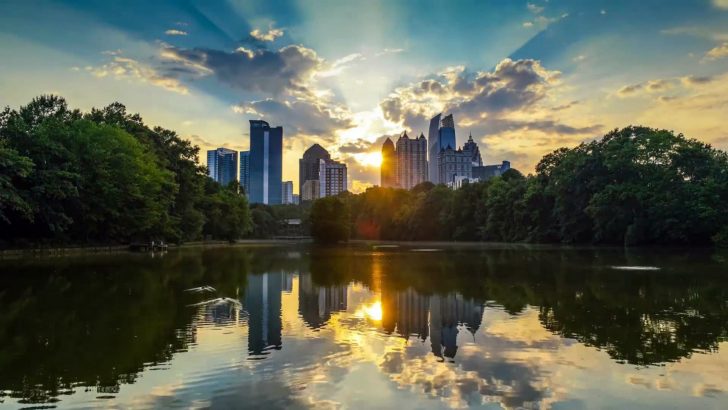 Atlanta, Hotlanta, the ATL – whatever you call Georgia’s largest city, you’re in for a good time when you visit this cultural travel epicenter.

The city brings in more than 110 million visitors each year from all over the world, and it’s not hard to see why.

Professional sports, major performance venues, incredible tourist attractions, civil rights history, the Hollywood of the South – the list of things to do is almost endless.

Even National Geographic ranked it as one of the best places on the planet for culture and history in 2022.

Atlanta is a mix of dynamic neighborhoods, the urban core, must-see museums, and vibrant parks with new businesses popping up all the time.

One of the phrases to know in Atlanta is ITP – which means “Inside The Perimeter” of I-285.

All of the city of Atlanta is located ITP, and there are so many more suburbs to explore.

There is also a strong presence of Black-owned businesses here, fueling a cultural kaleidoscope of stores, restaurants, and entrepreneurial opportunities.

Let’s not forget the wide array of musical artists from Atlanta or making music in Atlanta.

Atlanta is a major city with nearly half a million people within the city limits and more than six million people in the metro area. A city that large, with that many visitors, will come with certain risks, and most crime rates are much higher than state and national averages. There's a medium overall risk, but it's too wonderful of a city to avoid because of crime concerns.

MARTA is the bus and rail line system that gets you around Atlanta from downtown to the suburbs with dozens of stops in between. MARTA also has its own police force to help with crime and safety. Taxis and rideshares are readily available. If you choose to rent a car, just know Atlanta is infamous for its traffic.

The theft rate in Atlanta is twice the national average, and there's a medium risk of being pickpocketed or having a purse snatched. You should use an abundance of caution when visiting here, carrying only what you need and not wearing valuable items like diamond earrings when touring the city.

Atlanta can get tornadoes and flooding, which are the two biggest risks. Winter storms aren't all that common, but when they happen, the city's streets can be crippled by them. An ice storm in 2014 left hundreds of cars abandoned on the roads as any movement was impossible. There's a medium risk because of the various storms that can happen here. You should also know that Atlanta is extremely humid in the summer. That's not really a risk, but it is a harsh reality.

The robbery rate is twice the national average as well, so there's a medium risk here too. Atlanta also averaged more than two shootings per day in 2021. This is definitely a place where you don't want to fight back if approached by a robber.

Atlanta is a major transportation hub, with Hartsfield-Jackson International Airport being one of the busiest in the world. Given the sheer size of the city and all the headquarters of private and public businesses, Atlanta is always going to be considered at medium risk. You can download the "See Something, Say Something" app from the state of Georgia and easily report any suspicious behavior.

There's a medium risk in Atlanta for tourists being scammed, and scam artists will try anything to distract you. Avoid any situation where someone is trying to "help" you, even if it's just taking a picture with your phone (or their phone) or a street game with crowd engagement. Anything that takes away your focus is considered an opportunity for pickpockets. If you like to party, watch the movie Hustlers before you go. Versions of this scam happen in Atlanta as well.

The sexual assault rate is one category that is actually below the national average, BUT it did go up nearly 40% in 2021. Because all of the crime categories are medium risk, we're assigned the same risk here. It's a big city with many people looking to make a buck or talk to a pretty lady. Try to travel in pairs, don't walk around at night alone, and never leave a drink unattended at a bar. Even if you meet someone from social media, don't go to a private location. Stay in a well-lit, populated area.

The water meets or exceeds all standards across the board, according to the 2021 Water Quality Report. Nearby, Gwinnett County's water was voted the best tasting in the state.

Safest Places to Visit in Atlanta

While it’s impossible to list all the safe things to do in Atlanta because there are just too many, the website DiscoverAtlanta.com has a list for all types of travelers and even a whole section with free attractions.

You can download the Atlanta City Pass for a list of attractions with discounts for bundled purchases.

All of the attractions in the app are approved by the tourism commission, so you know you’re visiting respected places.

Olympic Centennial Park is one of the top tourist spots in the city.

Get a picture at the Fountain of Rings and explore the various water features, sculptures, tributes, and exhibits of international collaboration.

The College Football Hall of Fame is right next door too.

The Georgia Aquarium makes many tourists “must-see” lists, and it’s no wonder why with more than 100,000 under-the-sea creatures to see.

You can also see the world’s largest fish and look a shark right in the eye.

The World of Coca-Cola walks you through this history of the soda brand’s history with bottling exhibits and samples of all varieties of the popular drink.

You can buy tickets for the Georgia Aquarium and World of Coca-Cola at a discounted price.

For those traveling with kids, the Children’s Museum of Atlanta will be a great way to send a morning or afternoon.

The museum explores all senses with interactive exhibits and plenty of activities.

Just wait until you see the connected toy store!

If you’ve seen the Ferris wheel in pictures of Atlanta, that’s Skyview Atlanta, and it’s open for rides to the public.

The cars are enclosed, so you’ll get climate control as you soar 20 stories up.

The National Center for Civil and Human Rights is one of the attractions that put Atlanta on the National Geographic list.

While it began as a memorial to the fight for civil rights in America, it expands to global human rights and how you can be a force for change in the future.

It’s an inspiring and humbling experience every Atlanta visitor should see.

Stroll through the Buckhead District for shopping, sightseeing, sipping, and soaking in this uniquely Atlanta neighborhood.

There are history museums and incredible Southern architecture to explore.

This district is lively day or night.

Places to Avoid in Atlanta

The Atlanta Police Department offers three variations of crime mapping on its website, so you can search your hotel’s neighborhood and where your preferred attractions are before you go.

This will help you see crime trends closer to your visit.

While there isn’t a perfectly safe part of the ATL, there are some neighborhoods with higher crime than others.

The farther south and west you go, the more dangerous the neighborhood is outside of the downtown core.

Bankhead is one of the more dangerous cities, and don’t confuse that with the above-mentioned Buckhead.

You should definitely stay in the tourist areas when you’re visiting, and don’t go through neighborhoods or pull over in a rundown part of town to check your GPS.

You’ll be able to see if a neighborhood is less-affluent, but you never know what nicer neighborhoods might have more crime too.

Without having to dive into each one, you’re just safer staying on interstates and main roads when visiting Atlanta.

Safety Tips for Traveling to Atlanta

So... How Safe Is Atlanta Really?

The raw numbers can be quite staggering to see at first, but then you remember there are nearly half a million people who live just within the city limits.

There are gun crimes.

There is a drug problem.

However, I challenge you to show me a major city that doesn’t have those issues.

There isn’t an inherent risk of a tourist being a victim of a crime.

If you are coming from a small town, this is going to feel a little overwhelming.

If you’ve been to big cities like London, New York, Chicago, Miami, etc., this is no different aside from some higher-than-average crime rates.

Every single crime category went down in 2021, aside from rape, murder, aggravated assault, and larcenies.

More than 3,000 cars were stolen in 2021, almost average from the year before, but down slightly.

The overall risk in the Atlanta area is as follows:

You must pay attention to your surroundings and keep your belongings secured.

Every bit of common sense safety you know will go a long way here.

You’ll also have a large and present police force helping keep the community safe and responsive to any emergency you might have.

How Does Atlanta Compare?