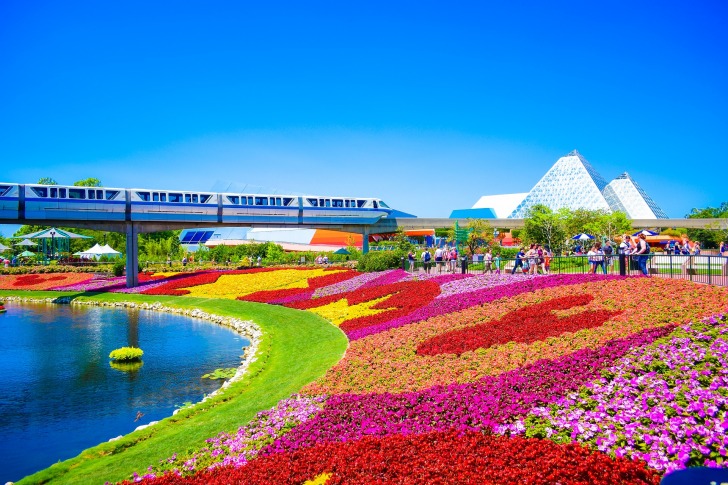 As the southeasternmost U.S. state, Florida has the Atlantic Ocean on the east coast and the Gulf of Mexico on the west coast with hundreds of miles of beautiful beaches.

Visitors are attracted to the state because of its comfortable winter weather and beach communities.

Miami is known for its Latin American culture, renowned arts scene, and nightlife, especially in the South Beach neighborhood.

Orlando is world-famous for its theme parks, such as Walt Disney World.

Travelers from across the globe bring their families to Disney for a chance to meet Mickey Mouse.

With 21.48 million inhabitants, Florida continues to experience a population boom with many transplants coming from the northeast section of the U.S.

In addition to the weather, there is no personal income tax in Florida, which makes it even more appealing to potential residents.

Florida cities are not the safest in the United States with some being safer than others. There are nice areas and crime-ridden deprived areas of all major Florida cities. The smaller towns are generally safe to visit as well. Whenever going to any new area, follow the usual precautions and you will have a comfortable trip to Florida without any issues.

Public transportation has a medium risk especially during rush hour when the vehicles are crowded. The main risk is related to pickpockets, not violent crimes. If this makes you uncomfortable then it is best to take a water taxi or regular taxi. Both are plentiful and licensed; however, unlicensed cabs exist so ensure you are ordering from a ridesharing app or reputable service.

Tourists and their belongings always attract pickpockets in crowded places and on mass transit. Therefore, watch your bags and pockets, never flash money or expensive items in crowded areas, and leave all valuables in a hotel safe.

Depending on where you are in the state will dictate exposure to natural disasters. The east coast of Florida is most vulnerable to floods, tornadoes, and hurricanes because of its direct exposure to the Atlantic Ocean. Visitors to Florida must study the weather conditions and know what to do in the instance of a natural disaster.

With crime being worse in some cities than others, armed robberies on tourists occur. The most common place for these robberies to occur is in empty parking lots at night or disadvantaged sections of cities. Therefore, don’t walk around alone late at night and never display valuable items in public. If attacked, do what the criminals say and immediately contact the police.

Unfortunately, the United States is always subject to terrorist attacks, so large touristy cities, like those in Florida are targeted. Attempt to avoid mass demonstrations and gatherings and take heed of all government warnings. Also, it will behoove you to learn the political environment of different Florida cities before arriving.

Most fraud in Florida is to trick an individual into giving them your sensitive data. That means travelers could be subjected to different scam types. The best way to avoid getting scammed is to always keep your sensitive documents on you or in the hotel room safe and credit cards in your bag. Never give any information to those you don’t know.

Women traveling solo to Florida can be safe if they don’t walk around cities alone at night, don’t get drunk in bars, and never attract too much attention with decorations or outfits. Drink drugging does occur in bars and clubs so never leave your drink unattended.

Like the rest of the United States, the tap water risk is low, especially in major cities. Always pay attention to the water advisories to ensure you are safe, but water issues are uncommon.

Safest Places to Visit in Florida

All cities in Florida have safe areas and attractions to visit.

Close to Jacksonville is the world-famous Daytona Beach.

Orlando has Disney and Epcot Center, which are incredibly safe, as well as a vibrant downtown.

A safe and interesting destination in Tampa in Ybor City, which is home to countless retailers, bars, and restaurants.

Miami is the most cultural and diverse city in Florida, with a heavy Latin and South American vibe.

St. Augustine is one of the most historic towns in the United States and incredibly safe, which makes it a do-not-miss destination.

All the coastal towns boast something unique with beaches generally being safe to visit alone.

Places to Avoid in Florida

In addition to the bad neighborhoods in major cities, some suburban and rural towns are consistently plagued by high crime.

Florida City, a small city south of Miami had the highest violent crime rate per 100,000 citizens.

Marianna, a city on the Florida Panhandle, also had high violent and property crime percentages.

Lake City, which is situated between Orlando and Tampa in the middle of the state also had high violent and property crimes in 2020.

Other cities to avoid include Riviera Beach, Starke, Cocoa, Palm Springs, Lake Worth, and Chattahoochee round out the list with a high percentage of crime.

Many of these areas are not heavily touristy due to a lack of attractions, so there is no reason to visit in the first place.

However, if you find yourself at one of these destinations, simply keep your wits and never flash money or valuables as this is just asking for trouble.

Safety Tips for Traveling to Florida

So... How Safe Is Florida Really?

Florida is a relatively safe state, especially in rural areas.

However, there are good and bad neighborhoods in all major cities.

Most crime is related to robberies, theft, and some violent, drug-related crimes.

One major issue in the large cities is drug trafficking, especially in Miami due to its location in the Caribbean.

Drugs come into Miami on boats in the middle of the night, and while this doesn’t impact tourists, the related crime could.

In the bad areas of the cities, tourists should avoid the area at all costs.

Do some research on the high crime areas of the places you’ll be visiting before travel.

Tourist areas, like along the beach, in shops, or downtown sections are safe, even at night.

Rental cars are always targets for thieves to leave valuables at home or in the trunk and always lock the car doors.

Take taxis or water taxis when returning to your hotel late at night to avoid any issues.

All major cities have prostitutes and drug dealers, both of which are illegal so stay away.

Finally, never walk into low-lit areas or remote sections of cities, and don’t get involved in street showdowns with anyone.

Florida can be a wonderful family or personal vacation due to its pristine beauty, exciting nightlife, incredible shopping, and excellent weather.

Most travelers won’t have an issue when visiting so it is a good and safe place to visit if you use common sense.

How Does Florida Compare?