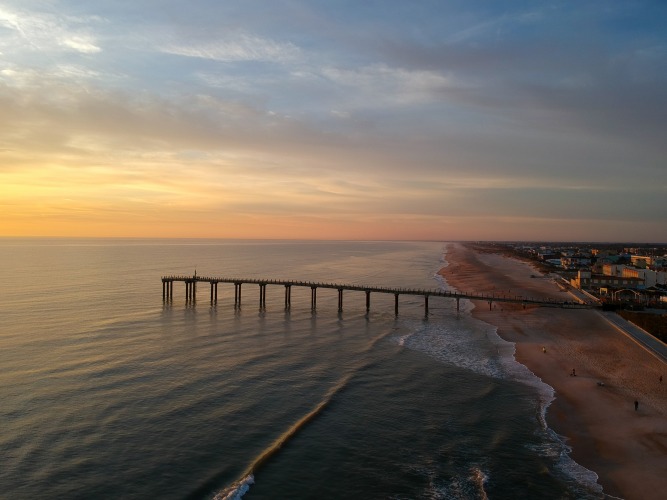 Lake Worth Beach, Florida, proves to be three of the most confusing words in the name of a city I’ve ever seen.

The technical name of the city is currently Lake Worth Beach.

It was just Lake Worth until 2019 when the word “beach” was added.

However, there are unincorporated parts of the city that still go by Lake Worth.

The U.S. Census only knows it as Lake Worth Beach.

There is also a Lake Worth, Texas, so overall it’s just confusing.

As long as you have the words “Lake” and “worth” and “Florida” in a search, you should get to the right spot.

The name isn’t the only confusing part of this beautiful beach spot.

There’s the Lake Worth Beach Casino Building, a focal point of the community, which doesn’t have a casino in it.

It was a derelict building for years before it was restored in 2013.

It’s a good thing we’ve got a white, sandy beach to sit on while we sort all this out.

I thought this quote from a resident was a great one, to sum up, Lake Worth Beach, “Lake Worth Beach is a multi-cultural, multi-generational experience where acceptance and love are promoted every day.”

This is a city where you have to be open-minded and accepting of all people.

It’s ethnically and culturally diverse and hosts one of the largest gay pride parades in the region.

Warnings & Dangers in Lake Worth Beach

The city has been overseen by the Palm Beach County Sheriff's Office since 2008 when the local police department was disbanded. At the time, crime rates were skyrocketing. Crime rates have dropped dramatically, but they are still high. Overall, there's a medium risk here.

The TriRail commuter train is a great way to travel through all the South Florida counties. Palm Tran is the bus system through Palm Beach and there's a route through Lake Worth Beach. County-regulated taxis and rideshares are also available. All options are safe with low risk while riding, but TriRail says there has been a spike of thefts and graffiti at the stations, so while you're waiting be vigilant.

There was one pickpocket report in 2020, but the take was $5,000! A great reminder to never have large sums of money or valuables in your purse or wallet. The overall theft rate is one in 44 and that's enough to give this a medium risk.

There's a medium risk in this hurricane-prone area that is also ripe for thunderstorms in the summer. Flash flooding and dangerous lightning can ruin an adventure. Keep a weather app handy to watch the skies, especially in the afternoon and early evening.

The robbery rate is four times the national average and 62% of the robberies that did happen were "highway robbery", which means it happened on or near a road most likely against a traveler. There's a medium risk, but it's the higher end of the risk range. Keep your belongings closed and secured and only bring what you need. If you do get robbed, don't fight back. It's not worth your life to protect your backpack.

The entire Miami and Palm Beach metro areas would be a medium risk, simply because of the population that would be impacted by an attack. With all the important ports and high-profile attractions, it's important to be aware of your surroundings and report anything that appears suspicious.

There's a medium risk of a scam here. They are mostly targeted at locals via phone, but there are some rental house scams and online websites offering great deals that turn out to be frauds. Also, don't ever believe someone who says they have a winning lottery ticket but can't cash it because they are in the country illegally. This scam reigns over a good portion of South Florida.

The rape rate here is twice the national average. Women should proceed with caution in this area due to all the crime rates. Let's call it a medium risk. There are amazing parts of Lake Worth Beach and some dangerous parts, so always go with a buddy if you can, and don't go into strange neighborhoods at night.

There's a low risk in tap water here. The city has taken steps over the past five years to update the system to provide even better water more consistently. The city is also vigilant in sending out boil orders if there is contamination.

Safest Places to Visit in Lake Worth Beach

One of the main reasons the city and voters changed the name from Lake Worth to Lake Worth Beach was to highlight the beautiful beach in the area and also to disassociate themselves from some of the unincorporated parts of the city that fed the high crime numbers.

So, let’s start at the beach.

The main draw here is the newly-renovated pier and casino building right on the beach.

The city wanted to keep the word Casino in the name to honor the 1920s history of this majestic building.

There is no casino there now, but it is quickly turning into one of the top wedding destinations in Palm Beach because of the grand ballroom.

Charming shops and eateries line the streets and every February this community hosts the Street Painting Festival, where artists draw all over the sidewalks and streets in stunning displays of artwork.

Lake Osbourne, just west of the city limits, is a great place for freshwater fishing or kayaking.

There is a campground here as well.

If you are wondering if there is a “Lake Worth” in Lake Worth Beach, there isn’t.

There is a Lake Worth Lagoon north of the city.

Places to Avoid in Lake Worth Beach

There seems to be a trend in South Florida that the most dangerous parts of a city are along the I-95 corridor.

The same holds true in Lake Worth Beach.

When you cross over the causeway to the beach, go south.

The northern part has a much higher crime rate.

The south part is also where the casino and pier are located.

Stay north of Lake Avenue if you can.

There’s no reason to be in those neighborhoods unless you have family or friends there.

While there are a lot of exciting things to do here, the main attractions are pretty clearly marked.

The Palm Beach Sheriff’s Office has done a great job of lowering gang violence across the county and in Lake Worth, but it’s still a problem.

One sign of gangs is the graffiti they leave behind marking their territory.

If you come across a graffiti-filled area, you should go the other way.

Safety Tips for Traveling to Lake Worth Beach

So... How Safe Is Lake Worth Beach Really?

This is a city of 42,000 with an incredibly high crime rate overall.

Crime rates were dropping until 2018 when the numbers surged back up.

Through 2020, the numbers were slowly going down in some areas, but not enough to make a big difference.

Palm Beach County is one of the top counties for opioid overdoses and deaths in the state.

Where there are drugs, crime follows, and vice versa.

Here are the chances of you being a victim of a crime in Lake Worth Beach, Florida:

You can stay safer in Lake Worth Beach by staying near the beach, the lake, or the downtown district.

Those places are what most people come to visit here anyway.

A lot of crimes happen in lower-income communities.

The city is going through gentrification, but there are still pockets of heavy crime.

How Does Lake Worth Beach Compare?

1 Review on Lake Worth Beach