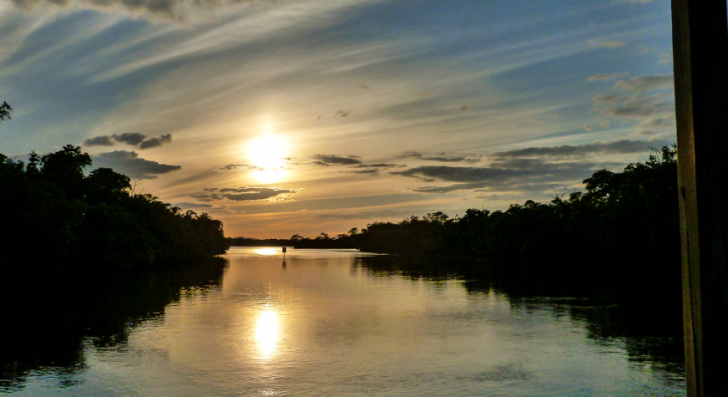 When you want to get away from it all and surround your senses with the pure natural beauty of southern Florida, Everglades City is the place to be.

It’s a town so remote it wasn’t even connected by road to the rest of Florida until the 1920s.

You’re going to need to like the outdoors here because this isn’t a spa retreat.

Bring the Dramamine if you get seasick, because you have so many boat tour options, it will make your head spin before you set foot in a boat.

It’s the gateway to the Ten Thousand Islands National Wildlife Refuge on the east side and the door to the Everglades on the west side.

In town, you’ve got about a dozen restaurants to choose from and fresh seafood is top of the menu.

Some restaurants allow you to bring your catch of the day and they’ll cook it up any way you want.

There's a low overall risk here. The town's population is less than 1000 people and most of the crowds will be tourists. This is an area built on tourism. Your biggest risks come from nature here.

At its longest point, Everglades City is 2.2 miles long. It's a very walkable town and public transit isn't needed. There are shuttles you can rent from Naples or Marco Island if you're taking a day trip here. There's a low risk, however, you travel, but a rental car would be nice to do the drive at your own time and pace.

This is a city so small it doesn't have its police department and the Collier County Sheriff provides law enforcement but doesn't give crime statistics for the cities, just for the country. That means any theft numbers I give you wouldn't accurately reflect the city. However, it's surrounded by Naples and Marco Island, which are two of the safest cities you can visit in Florida. This whole region is considered a low risk for pickpockets.

There's a medium risk here with dangers coming from the land and sky. Hurricanes can hit this area and even a smaller tropical storm can cause flooding. Severe thunderstorms and tornadoes can quickly spring up and do damage. This area gets 56 inches of rain a year. Even when it's not raining, it feels so humid it might as well be.

There's a low risk here. Again, it's one of the safest places in all of Florida.

There's a low risk here too. Terrorists are not going to concern themselves with a city that has more alligator residents than humans.

There's a low risk of a scam here, as there aren't a lot of people to scam you anyway. The best advice is you are going to be overwhelmed by the number of boat tours, fishing charters, kayak rentals, etc. Make sure you rent from a business that can provide they are licensed and have insurance. Know what you are signing when you are given the paperwork and if the company holds any liability for accidents that might happen.

This is a safe place for women and there's a low risk. No news reports or reviews give any reason to think otherwise. The worst you might get is someone "man-splaining" to you how to fish correctly.

There's a low risk in the tap water and it meets or exceeds government standards. There have been reports of the city water utility dumping sewage into the Everglades and refusing to shut off a pipe for repairs because it would have stopped water flowing into the town, but that was several years ago and the issues have been addressed.

Ten Thousand Islands is a great place to start, whether you go it alone in a kayak or on a paddleboard or take a tour and let someone else do the hard work while you lean back and watch the fish jump, the birds dive, and breathe in the fresh ocean air.

(P.S. There are not ten thousand islands.

There are a couple hundred.

Not sure who came up with that dramatic name.)

You can book an airboat ride through the Everglades at several locations.

Almost too many to count!

You can ask the different charters about noise concerns for young children since some airboats can be loud and if you are concerned about the carbon footprint, ask how their fleet protects the environment.

Everglades National Park spans 1.5 million acres of some of the most beautiful, terrifying, and intriguing sights you’ll ever see.

There are only two seasons in the Everglades.

The dry time is December through April, which is probably when you’d want to get the best of the ‘glades.

That’s when animals and predators are at their height of activity for the year.

The wet season from May until November can bring, obviously, a lot of rain and that creates a mosquito nightmare.

Tours can easily get canceled during severe weather or torrential rain during this time as well.

There are campsites located on some of the nearby keys, but you need to get a camping permit.

Just stop by the Ranger Station in town and they’ll hook you up.

In about 50 minutes, you can get to the Shark Valley area of the Everglades, where an observation tower gives you a bird’s eye view of the wilderness.

This is also a great area for star-gazing at night.

Places to Avoid in Everglades City

There isn’t enough of this time to have a bad part of town, but there are certain dangers that could come at night.

Stargazing is popular, but for safety, you might want to take a guided tour through either the park service or a local vendor.

Alligators hunt at night and an expert tour guide will keep you safe.

If you are camping you are going to use more bug spray than you ever imagined.

Camping in the dry season is pretty awesome, but in the wet season, you can get eaten alive by bugs.

If you plan on going outside at all, always carry bug spray.

It should be as important as that big bottle of water you’ll need.

The locals in the town will be more than happy to share any safety advice with you, and you might end up spending more than the dinner hour at a local eatery learning the secrets of the Everglades.

So... How Safe Is Everglades City Really?

I can’t tell you backed up with good statistics as the city doesn’t release them and Collier County only reports by the whole county.

Recent news reports include a former police officer who forced teenagers to strip during a traffic stop or threatened to take them to jail.

Another was a domestic murder where a son was accused of killing his father on a boat.

The best word of caution I can give is that the people who live here are tough and they’ve seen it all.

They are skilled at hunting, fishing, weaponry, and they know these waters like the back of their hands.

This isn’t a time to play “tough guy/girl” when you visit here.

Respect the efforts that go into keeping this community alive.

How Does Everglades City Compare?