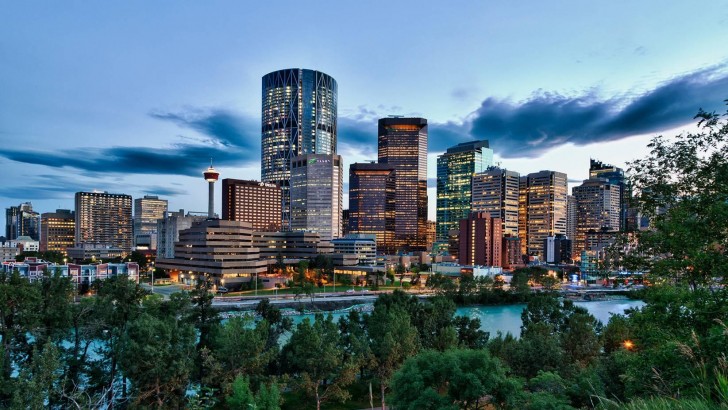 This city is in constant development after disastrous flooding in 2013 and 2016.

The must-see attractions are The Core Shopping Centre, the Calgary Zoo, the Telus Spark, the Glenbow Museum, the Calgary Tower, the Art Gallery of Calgary and the Military Museum.

Calgary has some annual celebrations which are unique for it.

Tourists can experience Calgary Stampede, the major party in Canada with pancakes and cowboy hats.

Calgary is a safe city to tourists since most of the violent crime is performed on the citizens. Its rank and score of 82% show that tourists can feel safe while in Calgary.

Once you decide to drive to Calgary, the city offers good roads and unforgettable scenery. On the other hand, parking in Calgary is a real nightmare. If you want to avoid it, you can use Calgary Transit which is efficient and clean. Also, Calgary has the largest fleet of car2go smart cars which can take you everywhere. Bear in mind that driving during the winter months can be dangerous due to the ice on the roads. All in all, transport in Calgary is considered safe.

When the pickpocket risk is in question, there are no records of it in Calgary. Tourists should remain cautious in case it happens.

The only possible natural disaster is flooding in case of heavy rainfalls and snowstorms during winter.

As in every big city, the risk of mugging and kidnapping exists, although Calgary is considered relatively safe. Travelers are advised to avoid certain areas during the night.

The risk of terrorist attacks is low, but tourists should follow the guide’s advice and be vigilant.

The very interesting fact is that there are no scammers in Calgary. The risk of being scammed is at a minimal level.

Unlike those countries where it is dangerous for a solo woman traveler to come, Calgary is a very safe city when this kind of risk is in question. However, the world safety rules should be followed both by men and women in terms of watching their drink and being aware of the people and surroundings.

So... How Safe Is Calgary Really?

Whenever someone decides to go, personal safety is a top concern.

That is why Calgary can be regarded as a trouble-free city.

With its relatively low crime rate, especially in terms of tourists, and a small percentage of serious criminal acts, this is a city that offers a perfect holiday for those who seek entertainment, as well as for people who want to experience cultural life.

Inglewood, with its houses dating back from the 1910s, is worth visiting.

All parts of Calgary are considered to be safe during the day, so tourists can explore Downtown Calgary with all its attractions and sights.

However, walking at night should be avoided in the East Village and Victoria Park areas, as well as Skid Row, because of the poor and homeless people, drugs and prostitution.

These areas are not necessarily dangerous in terms that you will be physically threatened there, but you might feel uncomfortable.

Today, Calgary has become a more cosmopolitan city that does its best to expand its attractiveness to visitors and it should be included on the map of your future tourist destinations.

How Does Calgary Compare?