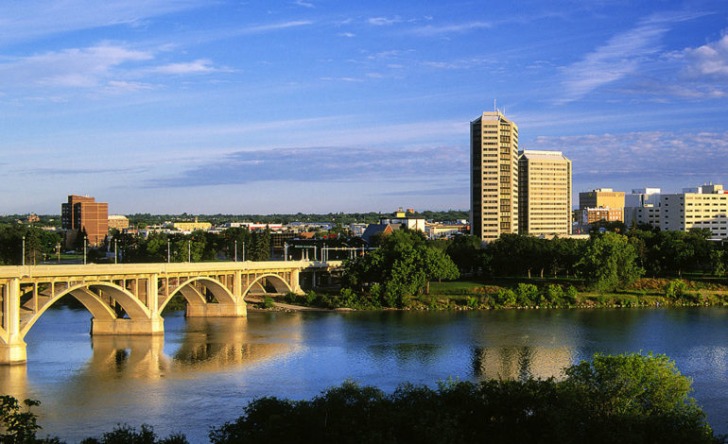 Saskatoon is a city in central Saskatchewan.

With a metropolitan population of about 257,000 people, it is the province’s largest city.

Saskatoon is located along the South Saskatchewan River and is known as a city of bridges.

Most travelers come here to visit many local festivals that the city hosts in the summer.

The best known of them is Saskatoon Exhibition, Shakespeare on the Saskatchewan – Saskatchewan’s only professional theater, SaskTel Saskatchewan Jazz Festival – a big jazz festival with free public performances and beer gardens at the Bessborough Hotel with significant artists; Canada Remembers Airshow; A Taste of The Saskatchewan – an annual festival in which 30 of Saskatoon’s most excellent restaurants are featured.

Saskatoon is a peaceful little town, but there are areas with high crime rates. It's better to avoid such areas. If you keep track of your belongings and prevent dangerous streets in the city, you can be here safe.

Public transport is safe. Beware of only final stops in disadvantaged areas. Taxis are reliable but do not take it on the street. Use the licensed service or call the car from the application on your smartphone.

We can say that pickpockets are not found here so often. However, in some areas of the city, and especially late at night, they may even attack you with the purpose of robbery. You also need to be careful in crowded public transport. Always watch your things, and do not leave them unattended.

Saskatoon is prone to flooding and flooding. You must find out the weather conditions before you travel to this city. In the winter, here are shallow temperatures, so it can be unsafe to move around without specific warm clothes.

Armed robberies with severe consequences are rare here, but there are. Most often, criminals like to break into cars and steal things from there. So always close your car and take all the things from there. Avoid dangerous areas of the city and contact the police if something happened to you.

Canada's current level is Medium, meaning that a violent act of terrorism could occur. There were no cases of terrorism in Saskatoon; however, travelers should always be on alert about this danger.

In Saskatoon, fraud is mainly associated with the telephone, SMS, and Internet fraud. Criminals try to trick your personal data and the data of your cards by cunning. Keep this in mind and do not give out such information to unfamiliar sources.

Usually, for women traveling alone, there is no problem in Saskatoon. They are unlikely to attract unwanted attention from local men. However, it is always worthwhile to have common sense and remember the usual security measures.

So... How Safe Is Saskatoon Really?

Saskatoon is a small and calm town.

The crime rate here is moderate but has grown over the past couple of years.

The city also has a slight drug problem.

The majority of avenues west of Idylwyld are considered to be sketchy, with a high amount of gang/drug activity, violent crime, and prostitution.

It’s probably best to avoid this part of town.

But usually, it’s relatively safe during daylight hours – and there’s little reason for tourists to be in these parts of town anyway.

Downtown has garnered a reputation for hosting a number of sometimes-aggressive panhandlers.

Be aware of them and watch your belongings also.

There are a lot of pickpocketers in that area.

The east side of the river has a general reputation among locals of being safer than the west side.

Don’t leave valuables in your car, don’t deliberately pick a fight with a stranger, and be aware of your surroundings when you walk at night.

In winter, the city is cold enough, so if you travel to Saskatoon in winter, take increased measures to avoid hypothermia.

The usual common-sense rules apply, and you should be fine.

How Does Saskatoon Compare?