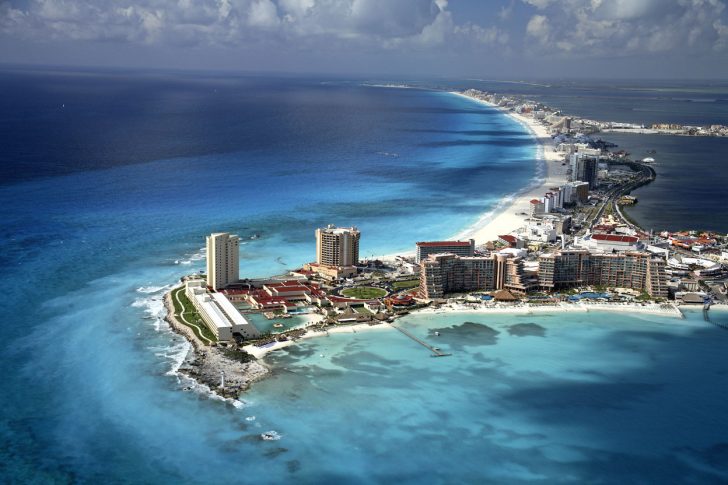 Cancún is located on the Yucatán Peninsula in the Mexican state of Quintana Roo.

Before American and British explorers arrived in 1843, it was populated by Maya Indians.

The name Cancún comes from the Mayan word, Cancúne, meaning “Vessel at the End of the Rainbow.”

Cancún remained a small fishing and gathering settlement until 1970 when the location was chosen as an ideal site for an international holiday destination giving way to a construction boom in the 1980s.

As a result, Cancún was converted into a significant tourist locale for visitors from the United States, Europe, and other parts of the world.

If you’re planning a trip to Cancún, you may be wondering just how safe the area really is.

Price inflation, scammers, street hawkers, and petty crime are more widespread, while the party mentality and rise in tourism invariably attract more drug trafficking, leading to an increase in cartel activity. Despite this, the crime rate is significantly lower than in many other parts of Mexico. Because tourism is the area's primary source of revenue, the Mexican government makes every effort to keep Cancún a safe location for visitors. Furthermore, the popular tourist area is heavily patrolled by police, making it a not-so-ideal place for criminals. Overall, this picturesque coastal city is rated a "low" on a scale of low to high risk.

Taking transportation in Cancún can be a reasonably safe activity. Many area hotels and resorts offer shuttle services to and from the airport. When taking a taxi, it's safe to do so within the hotel zone. Booking ahead is recommended, as there will be specific instructions, like where to meet your driver and other details.By no means hail a taxi. Also, make sure you agree on a fare ahead of time. If you don't, the drivers will demand outrageous sums when they arrive at the destination, which could result in a rather unpleasant experience.

A large number of visitors in one location usually means many thieves. Cancún is no exception. Pickpockets can be seen throughout the area, but mainly in Downtown Cancún, where there are fewer visitors, rendering them more visible. If you present yourself as a wealthy guest, you'll almost certainly lose some of your belongings. Never carry valuables such as jewelry, watches, or expensive purses with you. Pickpockets with quick fingers can easily distract you and remove them from your person before you realize it. Furthermore, keep your personal items in a secure location. As long as you follow basic common sense and heed the warnings above, the risk is relatively low.

Natural disasters are a concern in many parts of the world. For example, flooding and mudslides are possible during the rainy season in Cancún, which could disrupt transportation. In addition, Cancun's hurricane season runs from June to November, with a more significant chance of storms in August and October. Hurricanes, fortunately, are uncommon in the area. Only two have occurred in the last 30 years, so the risk of being affected by a natural disaster while on holiday in Cancún is low.

Although Mexico has one of the highest kidnapping rates globally, when it comes to kidnapping and mugging, Cancún is generally safe.Wealthy persons who travel to locations where police and security services are not present can be targets. If mugged, don't attempt to resist. Instead, comply with the offender's demands in an effort to deescalate an otherwise frightening situation.

Tourists are not a target of violent organized crime, but they can be affected if they are in the wrong place at the wrong time. Terrorist threats are unlikely in Cancún, but that can't be guaranteed. Therefore, it's always a good idea to keep an eye on your surroundings.

Scammers are people who do magic tricks or give free massages or food samples. Remember that bit we learned as children? Never take "candy" from strangers. In addition, be prepared to be conned by police officers. Expecting to be bribed, they could falsely charge you of petty infractions or traffic violations that you did not commit.

For female travelers, Cancún is a safe city. It's perfectly acceptable and safe to roam around during the day. Just be aware of your surroundings, and you guessed it, use common sense.There are several aspects of being a female traveler that does not apply to male counterparts, one of which is male attention. Unfortunately, it happens everywhere, and vacationing in Cancún is no exception. Avoid less crowded areas at all costs, and trust your instincts no matter where you are. If you become uneasy at any point, join the nearest group of individuals.

If you're visiting Mexico, be cautious of the type of water you consume daily. Many visitors avoid drinking any water in Cancún, even from the local hotels and resorts.Much of the water in Cancún that isn't filtered or sold contains parasites and potentially lethal bacteria that can cause illness and adverse reactions when consumed. This applies to the ice at hotels, bars, and restaurants, as well.

Safest Places to Visit in Cancun

These two areas are the most touristy, therefore safest places to visit in Cancún.

Isla Mujeres, an eight-mile offshore journey from Cancún, is also an idyllic and safe place to visit, especially if you want to escape the party culture that Cancún is known for.

Dubbed as a “real life paradise,” you can’t go wrong with a day or overnight trip to this tranquil setting.

Puerto Juarez, which is about a mile and a half north of Cancún’s city center, was not even established as a part of Cancún until 1990.

This makes the neighborhood quieter and less loaded with top-notch restaurants, shopping, and nightlife than others, but it’s also a terrific place to visit if you simply want to immerse yourself in the lives of local Cancun residents and avoid the crowds.

Placess to Avoid in Cancun

The general rule of thumb is to not venture away from touristy areas, especially at night.

Even some of the touristy areas, like downtown, should be avoided at night.

The neighborhoods to avoid are mainly located north of Lopez Portillo, near Bonfil.

The vast majority of violent crime in Cancún takes place on the city’s outskirts, far away from the tourist districts.

Safety Tips for Traveling to Cancun

While Cancún is considered generally safe, following certain precautions when traveling in the area is recommended.

You should be alright as long as you travel safely and are aware of the risks.

Many of the below tips can be applied when traveling anywhere:

So... How Safe Is Cancun Really?

Tourists are not at risk in Cancún.

On the contrary, it is one of Mexico’s most popular tourist spots, with hundreds of thousands of visitors each year.

Due to an upsurge in recent crime in the Mexican state of Quintana Roo, where Cancun is located, the U.S. Department of State currently advises travelers to “exercise extreme caution.”

This is what is known as a Level 3 advisory.

The following European countries are also listed as a Level 3 advisory or higher:

Moreover, Cancún lags far behind some of the most deadly cities in the United States regarding violent crime.

For example, according to World Population Review, Detroit, Michigan, has a violent crime rate of 2,007.8 per 100,000 people annually.

In contrast, Cancún has a violent crime rate of 64.

We’d still feel safe visiting places like Detroit, St. Louis, and New Orleans if we knew we’d have to apply common sense and stay away from the city’s most dangerous neighborhoods.

Of course, using common sense applies in Mexico, too.

How Does Cancun Compare?