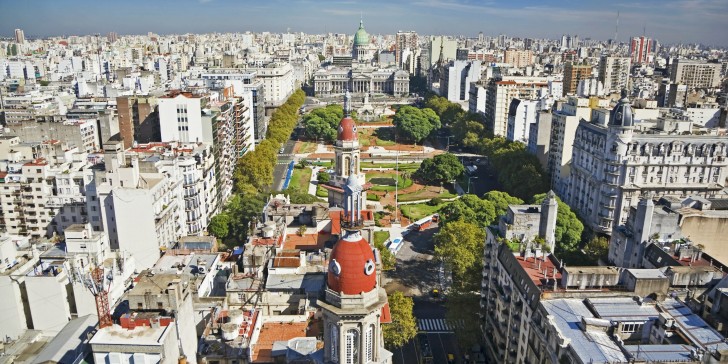 Argentina - safety as a country

Taking into because it is one of the most densely inhabited cities in South America and the capital city of Argentina, Buenos Aires is the center of culture, beautiful architecture, unforgettable nightlife, and glamorous tango.

Some of the must-see sights of Buenos Aires, among many, are Centro Cultural Kirchner, Parque 3 de Febrero, Santisimo Sacramento Basilica and Manzana de las Luces.

The architectural attractions of Buenos Aires were built in the 20th century.

Food and football are also tremendously popular in Buenos Aires, and watching Boca Juniors playing the football match at La Bombonera is the utmost sports experience, especially if it is played against their rivals River Plate.

Pickpockets are a standard occurrence, as in any other vast city, so be careful and pay attention to your belongings. Safety preventive measures are necessary and desirable.

As in every capital city, some taxis have no license, so it is better to call a radio taxi from a place where you are staying.

Pickpockets are in constant pursue of possible prey, especially when smartphones are concerned. Be ready to defeat various strategies that they are using and look out your personal possessions.

Rain can be the cause of floods, which is in turn, followed by transportation issues and difficulties.

Muggings are very frequent and in the case the victim confronts, muggers even tend to hurt the person using force. Kidnapping is not very often and it usually leads to the victim giving his or her money to the muggers and then is released.

Terrorist attacks cannot be predicted, so you need to follow the advice given by the tourist guides, police or government.

Taxi drivers are very interested in overcharging and touring the city once they realize that tourist is not familiar with the city itself, to take as much money as they can. Your bag should always be near you, because of the bag snatching. You should be cautious to avoid being scammed by taxi drivers who usually tend to switch the bills. If you give them real bills, they will change them for fake ones and try to convince you that they are right. You should remain confident and if you happen to mention the police, they will recede.

Women should not walk alone at night, because they can catch the attention of some undesirable people. Women can travel to Buenos Aires without any problems, but they need to be careful when in crowds and rural places.

So... How Safe Is Buenos Aires Really?

Bearing in mind the fact that it is a cosmopolitan city with a huge population and growing development, Buenos Aires is not so dangerous city.

The safety index of 60% is the best indicator that tourists do not need to worry too much in case they decide to visit this great place.

As in any other capital, it is always essential to pay attention to your valuables and be wide awake in case you find yourself alone at night or in an isolated area.

The Buenos Aires metro area has more than 12 million inhabitants and a huge number of a socially vulnerable population, so you need to be vigilant, when your watches, jewelry, and mobile phones are in question.

Argentina’s justice system is broken, meaning that petty thefts are not prosecuted and the thieves do not go to jail.

Thus, they are on the street, making their methods flawless.

However, there is no need for great concern.

You only need to be aware that the fact that you are tourist attracts the lawbreakers for any kind of criminal action against you, and this is what you should take care of.

Stay in a good neighborhood, do not wear expensive jewelry, although you may get a much better rate, do not exchange money on the grey market and always have in mind the fact that everyone in Argentina believes that  Buenos Aires is the most dangerous city in the country.

How Does Buenos Aires Compare?