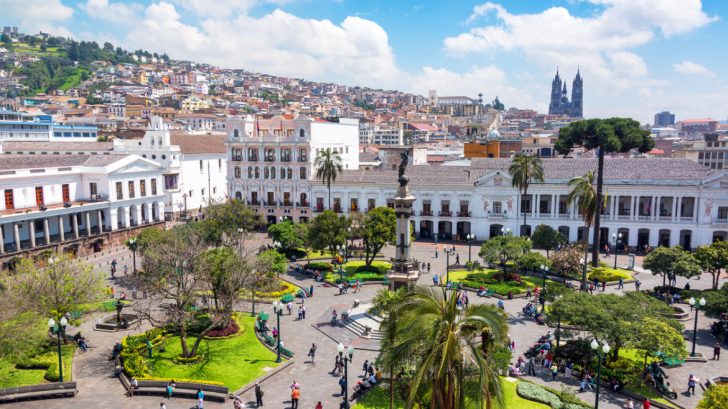 Ecuador - safety as a country

The City of Quito, whose official name is San Francisco de Quito, is the capital city of Ecuador, South America and has a population of 2,671,191 inhabitants, which makes it the second-largest city in Ecuador.

There are many geographical features around it starting from the Guayllabamba river basin, Pichincha Volcano and an active stratovolcano in the Andes Mountains.

It was the first World Cultural Heritage Sites declared by UNESCO in 1978.

You can admire its colonial buildings, museums, and churches like La Compañia de Jesus Church and the neo-gothic Basilica del Voto Nacional or visit the largest urban park in South America – Parque Metropolitano.

You need to be careful as in any other country and watch out for pickpockets. You should also know that all Ecuadorian citizens and visitors are required to carry ID at all times and roadside police might check and request from you to show your ID. You can show your passport or the verified copy of it, since it is not advisable to carry your passport wherever you go, due to the numerous thieves.

The public transportation in Quito can be dangerous and increase the number of robberies happen on buses and at the stations. Also, you should not take interstate buses that stop and pick up passengers at night as they are often used by many criminals to attack passengers. It is advisable not to use unlicensed taxis in Ecuador. Official taxis are not dangerous and they can be recognized by orange license plates or white plates with an orange stripe on the top and video cameras inside. If you decide to drive, bear in mind the fact that serious accidents are very common, due to careless driving, speeding, and badly maintained vehicles.

The risk of being pickpocketed in Quito is very high, especially in tourist locations where thieves use different strategies to rob you. Expensive jewelry and gadgets should not be shown when walking around. You need to watch your bags on public transport as well.

Ecuador is very prone to numerous natural disasters such as earthquakes, tsunamis, and volcanic eruptions. It is situated in an area of intense seismic activity, and when coming there, you should get familiar with safety procedures. Some volcanoes are in a state of eruption and the rainy season, which runs from December to May, can be risky. Due to high temperatures, strong winds, and little rain, forest fires can occur.

The high risk of being kidnapped and seriously attacked is high and it makes Quito a very dangerous place. If it happens to you, you need to cooperate and do not resist. Give them the money and valuables that they want and avoid being seriously hurt or injured. Victims are usually forced to withdraw money from ATMs to be released. Take particular care in ‘La Carolina’ and ‘El Ejido’ parks, the districts of ‘La Mariscal’, ‘La Floresta’ and ‘La Marin’, the bus terminals and the old town. Armed robbery is a constant hazard throughout Ecuador, so travel in a group whenever possible.

The most frequent scammers are taxi drivers who take advantage of travelers. As you can be easily distracted and have all your possessions stolen before realizing it, you need to watch your bags on buses. One common scam involves a thief impersonating bus staff who will ask you to put your bag somewhere you cannot see it. So, you should always have your bag on your lap. Another way of distraction is when a thief is pretending to sell sweets and after spilling them all over you, his friend steals your belongings. Ignore persons asking for money under any pretext, including begging children.

There are not many reports of foreign women being assaulted here, but if you are traveling alone, you should pay attention to your surroundings, since you might get some unwanted attention from men. Incidents of attacks and serious sexual assault against foreign women have increased lately and criminals often use drugs to subdue victims. Quito is not immune to crime, so do not go wandering off the main streets.

So... How Safe Is Quito Really?

Quito is a great city, and tourists should not worry too much if they are vigilant and watchful, since every big city attracted by tourists is also attracted by the criminals.

You should avoid certain neighborhoods, take normal precautions when pickpocketing and purse snatching are in question and use only registered taxis.

All this will significantly decrease the risk of becoming a victim of crime, including armed robbery and express kidnapping.

How Does Quito Compare?