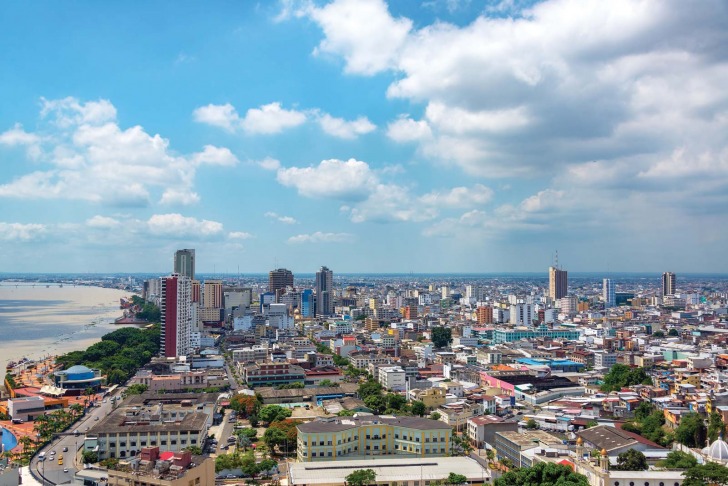 Ecuador - safety as a country

Guayaquil is the largest and most populous city in Ecuador.

Guayaquil is one of the leading South American ports in the Pacific.

In the last decade, the city has undergone positive change.

The beautiful riverfront promenade “Malecon 2000”, green areas, and modern shopping arcades all over the city attracts tourism from inside and outside the country.

Travelers come here to visit Ecuador culture, enjoy the tropical climate and see some attractions like The Malecon Simón Bolivar, Santa Ana & El Carmen hills, Las Peñas, where the city was founded, The Central Bank Building, Jardín Botánico (Botanical Garden), museums and parks, and many others.

Guayaquil is a rather poor city, and lawlessness flourishes in it. Most often, tourists become victims of robberies and fraud if they do not follow security measures. Walking alone around the city after sunset is strictly not recommended.

Public transport is not safe. It is better to use a taxi to get around the city, especially when you return late at night. Do not sit in the seat near the driver and always make sure that he has turned on the taximeter. If there is no taximeter, discuss the price of the trip before you sit inside the car.

Pickpockets and other petty thieves are particularly active in tourist areas, airports, restaurants, bus terminals, public markets. Thieves often distract their victims, sometimes by purposefully spilling liquid on a victim and pretending to help clean it up (condiment scam). At the same time, accomplices snatch the victim’s bag or pick the victim’s pocket. Be aware.

Ecuador is located in an area of intense seismic activity. There is a high risk of earthquakes, volcanic eruptions, and tsunamis. Before your trip here, study the current hazard level from these risks and take appropriate measures.

Armed robberies are quite common in Guayaquil. Do not wear expensive jewelry while outdoors; take some money with you. Carry a copy of your passport, including the entry page, and keep the original safe. Do not be on the streets of the city late at night and alone.

Although Ecuador has no history of terrorism, it cannot be ruled out due to its proximity to Colombia. Some civil unrest occurs in the city from time to time, so in order not to get into a terrorist attack, stay away from political rallies and crowds.

Most often, scammers here try to deceive tourists, sell them non-existent tours and excursions. In a taxi, you can be fooled by the price of the fare. And if you are given change in cash - dollars are often fake. Be mindful of your surroundings.

Women are not recommended to travel to Guayaquil alone. During the day it can be more or less safe, but at night you better not show on the streets. Besides, local men may show you unwanted increased attention.

So... How Safe Is Guayaquil Really?

Guayaquil is considered a rather unsafe city to travel.

Despite all the attractiveness for tourists, a high crime rate remains in the city.

Most crimes involve the theft of goods, car theft and hacking, drug trafficking, vandalism, and housebreaking.

Guayaquil also has a high crime rate and bribery.

Travelers should take specific precautions to protect themselves from harm.

The significant safety risks in the area are risks of victimization from petty theft and associated crimes.

These happen in the form of pickpocketing, purse snatching, cell phone snatching, and theft from vehicles.

Travelers should always keep all valuables locked in hotel safes.

This includes credit cards if you are going out at night.

Get the cash you need from the bank teller or ATM.

Leave the credit card at home in the hotel safe and not in your room.

Be alert and aware of your surroundings to protect yourself and know the numbers to local hospitals and embassies in case more severe problems occur.

Do not walk around on the streets at night, even in groups.

Keep your car doors locked at all times and windows rolled up.

Water from the tap is not drinkable.

How Does Guayaquil Compare?