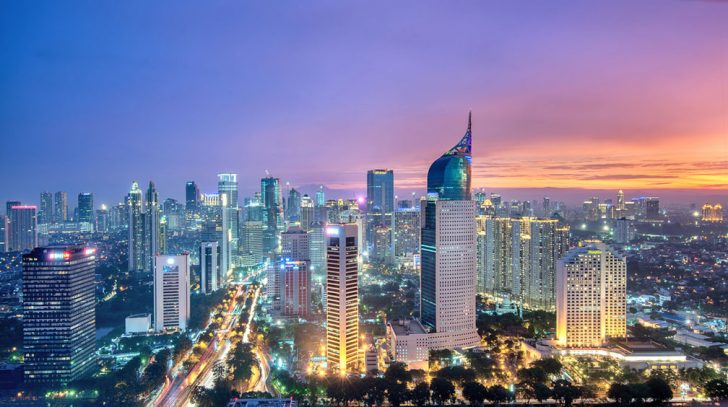 Being the country’s economic, cultural and political center, Jakarta is the capital and largest city of Indonesia, it is the most populous city in whole Southeast Asia.

Heavy traffic and high level of pollution are present in the city, but it still attracts tourists with its exciting nightlife, sandy beaches followed by diving and surfing and vibrant shopping areas.

The city is the center of Indonesian culture and you are guaranteed to meet people of all sorts here.

The Old City, with the Dutch style buildings, stays as a reminder of how the city looked like before the modern buildings were built.

Among other areas interesting to include on your agenda if coming here are Jakarta History Museum, Maritime Museum and Sea World Indonesia.

When the overall risk is in question, Jakarta can be considered not so safe city. Tourists need to exercise a high degree of caution in Jakarta, and this is all due to the high threat of terrorist attack. Your security is at danger at all times, so you need to pay special attention. Before deciding to come here, you should watch the media to get the latest information about safety.

People are friendly, hospitable, and helpful, but make sure to keep away from the mini-bus drivers and some notorious taxi drivers. There are unfair taxi drivers that do not use meters. Public transport in Jakarta can be considered safe, but overcrowded and thus targeted by pickpockets.

Taking into account the fact that it is a city with a high touristic flow, pickpocket risks are possible. To decrease the chances of being robbed, little precautions are enough. Theft and other petty crimes, such as robbery and bag snatching, are frequent with violence, which is sometimes used.

Natural disasters occur. Earthquakes and tsunamis are common in Jakarta and the eruption of the volcanoes might be a threat because they can erupt at any time and cause widespread loss of life and destruction. Floods and mudslides occur during the wet season, and after the water recedes, it leaves the high risk of contracting water-borne diseases. In the event of a natural disaster, follow the advice of local authorities.

Mugging and kidnapping risks in Jakarta are rare and it is unlikely that you might get assaulted. However, you should not rely on this, and should always practice common sense and make sure to avoid some risky areas at night.

Since terrorism is a worldwide threat, tourists need to be careful in case of any suspicious activity. Security in Jakarta tends to be heavy and constant information indicating that terrorists may be planning attacks in Indonesia is received. Attacks might occur anywhere, anytime, including locations frequented by tourists.

Drink spiking with toxic substances occurs. Fake Arak, dangerous for your health, is often offered to tourists since it costs less because methanol is used instead of alcohol. Scams with credit cards are frequent in Jakarta and criminals use electronic “skimming” to steal credit card credentials and pin code at some ATMs. Some scammers pretend to recognize the victim offering him/her a drink and a ride, to mug him/her.

Women can feel safe in Jakarta. There are no reports of foreign women being assaulted, but you should always be vigilant and do not accept help or drink from unknown males.

So... How Safe Is Jakarta Really?

Jakarta is a huge city with several districts that have strong cultural value, but, unfortunately, many of the buildings are not well preserved.

The area around Old Town covers very interesting places to visit and it is safe, but be aware that the big flow of tourists attracts pickpockets and scammers.

When it comes to crime, you should stay away from the Ancol Port area and other neighborhoods in the North of the city, which have the highest crime rate among other districts.

Criminal problems have become more serious in the last 10 years and pick-pocketing or bag snatching are the most common crimes.

Business travelers need to watch for their laptops, which have been known to disappear even from within office buildings.

In general, as long as you exercise awareness and precaution, avoid walking alone at night and be wary of strangers you do not have to worry about your safety in Jakarta.

How Does Jakarta Compare?