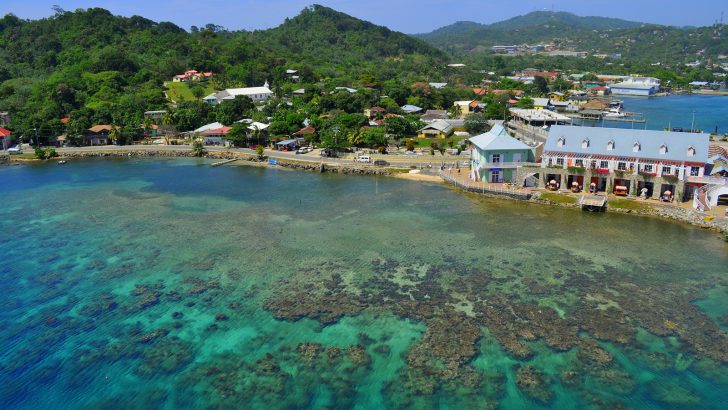 Honduras is the second biggest country in Central America.

It shares borders with Guatemala to the northwest, El Salvador to the south and Nicaragua to the southeast.

It boasts natural beauties, colonial villages (Gracias, Comayagua), a breathtaking history that can be experienced during a visit to the ancient Maya ruins, natural parks, both Pacific and Caribbean coastline and the Bay Islands, that are basically just jaw-dropping beaches offering world-class snorkeling and diving.

Experiencing the coral reefs in the Caribbean paradise of Bay Islands: Utila, Roatán, Guanaja, and the Hog Islands is an exceptional adventure.

Visit the impressive ancient Maya civilization in Copán and marvel at its sculptures that are world-known for their quality.

Be a witness to several Mayan sites such as the main acropolis with the hieroglyphic staircase and the Rosalila Temple, Las Sepulturas, and El Rastrojon.

There there’s one more natural wonder: Lake Yojoa — the biggest lake in Honduras, famous for the little picturesque restaurants offering delicious fried fish by the lake.

Honduras is somewhat safe to visit, though it has many dangers. You should be aware that tourist hotspots, public transportation and some streets are places where most thefts and pickpocketing occur, and that violent crime exists on the streets, too.

Public transport is highly risky in Honduras. There have been robberies in public transport and buses are sometimes stopped while the robbers attack or harass the passengers. Be wary of unlicensed taxis since you might get kidnapped and robbed.

As for pickpocketing and bag snatching, it is a recurring concern on the streets of Honduras, so be careful and hold your bags tightly by your side. Make sure you don't flash your valuable possessions on the street, or better yet, leave them in your accommodation.

As for the natural disasters in Honduras, the rainy seasons that lasts from May to November brings many disastrous threats such as hurricanes, landslides, mudslides and flooding. Apart from that, Honduras is located on an active earthquake zone so tremors can be expected.

Mugging is also an issue in Honduras. In such a situation, hand over all your possessions immediately and do not resist. Armed bandits often attack minibuses and vans loaded with tourists traveling from the airport to their hotels in Sand Pedro Sula. Avoid poorly lit and deserted areas.

The risks of terrorist attacks in Honduras are low, but since they shouldn't be ruled out, it is important that you remain vigilant at all times and aware of your surroundings.

As in almost any country, there is a great risk of getting scammed if you're a tourist. Always check everything twice and negotiate everything in advance. Taxi drivers might try to trick you into paying more, giving you wrongful information about the price of the ride.

Many women have traveled alone to Honduras and haven't had any problems at all. However, this country isn't the safest in terms of females traveling solo, especially at night and you should exercise precaution measures at all times and avoid dark and empty streets and locations. Be very careful when interacting with men, even hotel employees.

So... How Safe Is Honduras Really?

Though Honduras is a gorgeous country, you should keep in mind that Honduras has extremely high rates of crime.

The most common form of crime is petty theft, pickpocketing and purse snatching occurring all the time on the streets of Honduras.

This obviously means that you should keep your valuables in a concealed place and avoid going out with jewelry and flashy objects.

Be aware of your surroundings at all times.

Streets of Tegucigalpa and San Pedro Sula are known for robberies that happen both during day and night, often carried out by two-man teams on motorcycles that snatch items from pedestrians.

Violent crime is a serious issue in Honduras, with crimes such as kidnappings, rape, assaults, and murders.

Armed robbery is a common problem, with armed bandits attacking minibusses and vans loaded with tourists traveling from the airport to their hotels in San Pedro Sula.

Sometimes they even stop the buses in order to rob and assault the passengers and drivers.

Murder rate may be the biggest concern for foreigners.

During the period between 2010 and 2015 Honduras had the highest murder rate in the entire world.

Many accidents occur shortly after the victims arrive in Honduras and it may be so because there are criminal sources at the airports tipping off the information they pick up about tourists’ whereabouts and accommodation.

Because of this, visitors are strongly advised against discussing the details of their travel plans and accommodation in public.

How Does Honduras Compare?