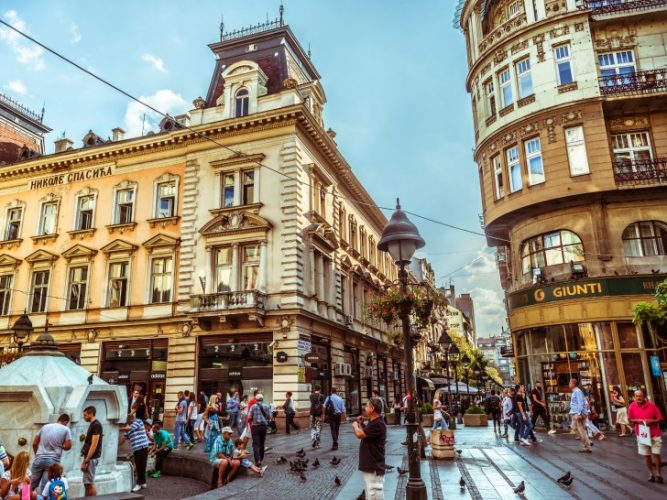 Serbia is located on Balkan peninsula, with plain lands on the north and mountains with popular ski resorts in the south.

The capital city, Belgrade, is the reason why the tourist flow has considerably increased in the past decades, since its nightlife and extremely friendly people are so welcoming and offbeat, that more and more tourists come to Serbia every year, especially during the summer months.

Of course, the political situation had a lot to do with the increase of tourists, since it has finally settled after many, many years of war.

Serbia has always been a kind of an unknown surprise, even for people living in Europe, and they are always surprised, rightly so, at how welcoming its cities are, as well as its culture.

It is a cradle of many cultures and has a heavy load of history, which makes it a real gem for any tourist.

And since its people are so warm – this country is considered to be very much safe.

Serbia is generally very safe. It is ranked 31st of 162 on the list of the safest and most dangerous countries. Its people are very kind and happy to help, and tourists especially shouldn't encounter any bigger problems in Serbia.

Transportation in Serbia is overall safe. Just be on the lookout for pickpockets on public transportation, and double-check if the taximeter is on when you enter a taxi.

Pickpocketing and bag snatching are the most common form of street crime in Belgrade, so if you do encounter any problems it will probably be pickpocketing that mostly happens in public transportation. Be extremely careful when entering any bus in this country's capital, since its pickpockets are very skillful and you won't even notice anything missing until you get off the bus.

In the past couple of years, the only natural disaster that severely affected Serbia was flooding of large proportions, with even fatal results. Apart from that, Belgrade stands in the seismically active area (Level 2a), but earthquakes of any kind rarely happen.

Mugging exists but is rare. There have been reports of kidnapping either as a consequence of someone failing to pay a debt, or kidnapping by rival criminal organizations. Crimes like these do happen, but have declined in the last decade significantly, and are not likely to happen to a tourist.

Terrorist attacks are more likely to happen in most popular European capitals such as Paris, London, etc., than in Belgrade. There is a risk of a terrorist attack happening but it is really low.

Any newcomer is in danger of scams when visiting a new country, and the same applies to Serbia. The most common scams are people ripping you off in bars or clubs, or by the street vendors, as well as drink spiking in strip clubs.

Serbia is very safe for women travelers. Attacks rarely happen, if ever, but still, be on the lookout at all times, especially at night, or in deserted areas, empty, poorly lit streets, etc.

So... How Safe Is Serbia Really?

Serbia is known for its warm and welcoming nation, and even more so towards tourist, so it often happens that the main tourist impression of Serbia is how kind its people are.

Therefore, it is no surprise that this country is considered to be very safe for any tourist to visit.

However, as anywhere, there are places that should be avoided, and if you use basic precaution measures, your trip should go smoothly.

Even though the main concern for visitors is pickpocketing, it should be noted that crime rate in Serbia is high, due to the activity of organized crime groups, constantly fighting over prominent areas, and their conflicts often end in violence.

As for its nightlife, which is highly popular in Serbia, the most popular place to be in Belgrade, since it is filled with clubs, bars and places called “splavovi” (meaning, basically, a club floating on water) that are open until early morning.

However, these floating clubs are generally owned by the Balkan criminal organizations and if any confrontation happens there, it usually also ends in violence, so although these places might be very attractive for newcomers, it may be best to avoid them.

Serbian people are very involved in sports and are usually ardent fans of one of two most popular rival clubs: Red Star or Partizan.

Visiting their games could be potentially dangerous for tourists (and not only for tourists), since there have been cases of foreigners being attacked by the fans of these clubs, in Serbia known as “hooligans”.

They are more often than not connected to criminal groups or ultra-nationalist organizations, so be extra cautious when attending sports games, especially because the rivalry between these two teams is extremely intense.

When it comes to street crime, the most dangerous thing that can happen to you is pickpocketing, usually in public transportation, crowded places such as bus stations in the city (the most popular city bus station Zeleni Venac is notorious for pickpockets) and the main pedestrian street in Belgrade – Knez Mihailova.

Other areas of concern in Serbia are:

How Does Serbia Compare?