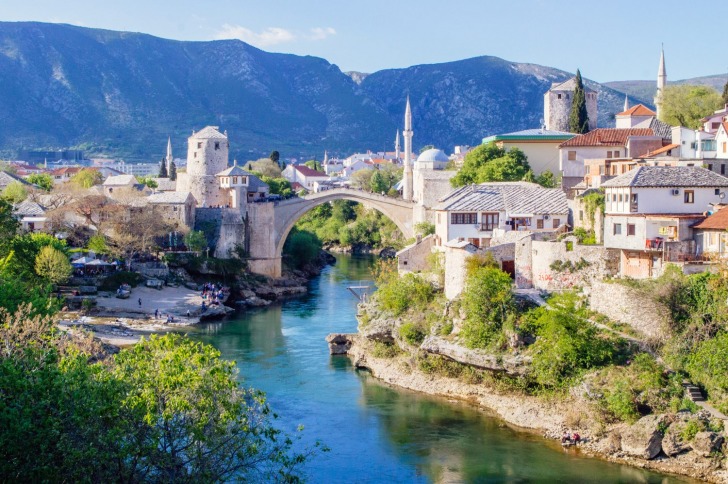 Bosnia and Herzegovina : Safety by City

Bosnia and Herzegovina is a friendly European country located on the Balkan peninsula.

It was formerly part of Yugoslavia but gained independence in 1992 and it’s full of historic monuments and landmarks that all point to the time while it was a part of former Yugoslavia.

Bosnia and Herzegovina share its borders with Croatia to the north, west, and southwest, Serbia to the east, and Montenegro to the southeast.

It boasts two different areas: one that is mostly mountainous – which is why it was the host to winter Olympic games in the past, and it also has access to a tiny portion of the Adriatic Sea coastline in the south, so it basically has the best of both worlds.

Warnings & Dangers in Bosnia and Herzegovina

Bosnia and Herzegovina is generally a safe country. Its people are very kind and happy to help, and tourists especially shouldn't encounter any bigger problems in this country. Small towns do not face almost any serious crimes, though that's not the case with its capital, Sarajevo.

Transportation in Bosnia and Herzegovina is overall safe. Just be on the lookout for pickpockets on public transportation, and double-check if the taximeter is on when you enter a taxi.

Pickpocketing and bag snatching are the most common form of street crime in Sarajevo, so if you do encounter any problems it will probably be pickpocketing that mostly happens in public transportation. Be extremely careful when entering any bus in this country's capital, since its pickpockets are very skillful.

In the past couple of years, the only natural disaster that severely affected Bosnia and Herzegovina was flooding of large proportions, with even fatal results. The flooding in 2014 shifted some land mines and also some notices about unsafe areas.

Mugging exists in this country, but is rare. There have been reports of kidnapping either as a consequence of someone failing to pay a debt, or kidnapping by rival criminal organizations, since this sort of organized street crime is usually the most common of crime. Tourists are not under any sort of threat.

Terrorist attacks are more likely to happen in most popular European capitals such as Paris, London etc., than in Bosnia and Herzegovina, even more so because it's mostly inhabited by people of Muslim religion.

Any newcomer is in danger of scams when visiting a new country, and the same applies to Bosnia and Herzegovina. The most common scams are people ripping you off in bars or clubs, or by the street vendors, as well as drink spiking in strip clubs.

Bosnia and Herzegovina is very safe for women travelers. Attacks rarely happen, if ever, but still, be on the lookout at all times, especially at night, or in deserted areas, empty, poorly lit streets, etc.

So... How Safe Is Bosnia and Herzegovina Really?

Bosnia and Herzegovina is mostly safe for travelers and the biggest threats are of natural disasters, like floods.

Avoid traveling off the beaten path in Bosnia, since the nation is still in the process of clearing many of the estimated 1 million land mines left during the war of 1992-1995.

In rural areas, it is of utmost importance that you stay on paved – a fact that is almost unbelievable but true is that often houses and private property are paved with mines since the time their owners fled during the war.

Pickpocketing, reckless drivers, and petty thefts are almost the norm in Sarajevo and some foreigners have been victims, too, but that’s not common.

Even though the chances for you to be affected, as a foreigner, are small, be wary of petty thieves – small crimes have been on the rise during the recent years.

Still, the country as a whole, crime-wise is much safer than most parts of Europe.

Be very careful when crossing the street, and don’t expect people and drivers to stop.

Traffic culture in this country is poor and you could easily get hurt.

As for health, there are no known dangers, and the tap water is drinkable, except for some parts of Bosnia, like the Posavina Region and Eastern Bosnia, where drinking tap water could result in illness.

How Does Bosnia and Herzegovina Compare?

19 Reviews on Bosnia and Herzegovina