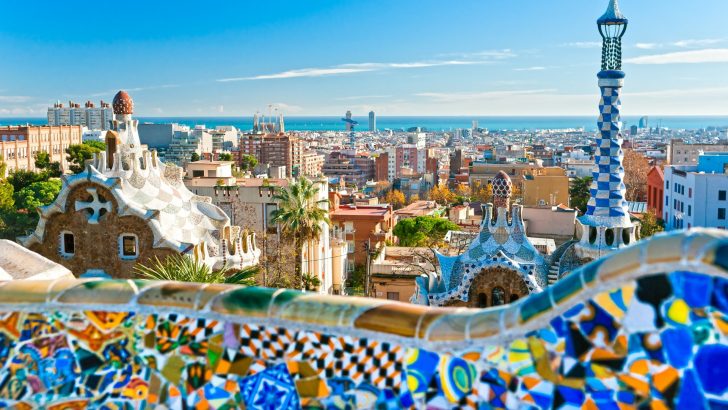 Spain is a country located on the Iberian Peninsula, sharing it with Portugal at the western end of the Mediterranean Sea.

This country, although mostly known for its beaches, is actually filled with historical and cultural heritage: it is the country with the third-largest number of UNESCO World Heritage Sites, coming after Italy and China.

Its perfect coastline implies fun nightlife, but apart from that and its historical and cultural heritage, Spain is actually very geographically diverse: apart from its beaches that everyone knows it for, in this country, there is everything from vast meadows and snowy mountains to huge deserts in the southeast.

It is also popular in Europe due to its friendly inhabitants, a laid back feel to it (especially near the coast), relaxed lifestyle, its delicious cuisine, vibrant nightlife, and world-famous festivities.

Some of the places that are a must-see in Spain are its thriving capital Madrid, the cultural capital of Barcelona, the famous “Running of the Bulls” at Pamplona, gorgeous Andalusian cities with Islamic architecture, like Seville, Granada and Córdoba and of course, the dreamy, picturesque Canary Islands.

Spain is very safe to visit. Apart from the pickpockets, which are common in this country, tourists should encounter no other problems. Use your common sense and your trip should go smoothly.

Transportation in Spain is very safe and reliable, even though taxi drivers might try to overcharge their services or demand a tip. Also, be careful on public transport, as it's the place where pickpockets operate.

Spain is filled with tourists, and naturally, it attracts a bunch of pickpockets so watch out in crowded places such as bus and train stations. There is even a message played on repeat at stations, reminding you to be wary of pickpockets. Be careful when carrying your valuables and never leave them out of your sight.

Do not fear mugging or kidnapping in Spain, since it is a rare occurrence here. Still, do not accept any unsolicited help or drinks from anyone you don't know (even though drink spiking is also not an issue in this country).

There haven't been recent terrorist attacks in Spain, but in the light of recent events in this part of Europe, they shouldn't be ruled out, so you should remain vigilant and be aware of your surroundings at all times.

There are a couple of ways to get scammed in Spain. You should avoid gypsy women offering you some rosemary: they will read your future and ask for some money or pick your pockets with the help of another gypsy woman. Be wary of "trileros" and their "shell game" where you might get ripped off or stolen from. Always check the bill twice in restaurants and bars since the staff may try to overcharge you or charge for something you did not order.

So... How Safe Is Spain Really?

Spain is a safe country to visit, but it is recommended that you take some basic precautions measures since it is known to be crawling with pickpockets, especially around popular tourist landmarks and larger cities.

Also, exercise caution at the Spanish Flea Market (el Rastro) in Madrid over the weekends.

Here, the pickpockets operate in groups.

They will probably rip you off you if you play, and if you stop to see other people play, they’ll probably pick your pockets.

How Does Spain Compare?