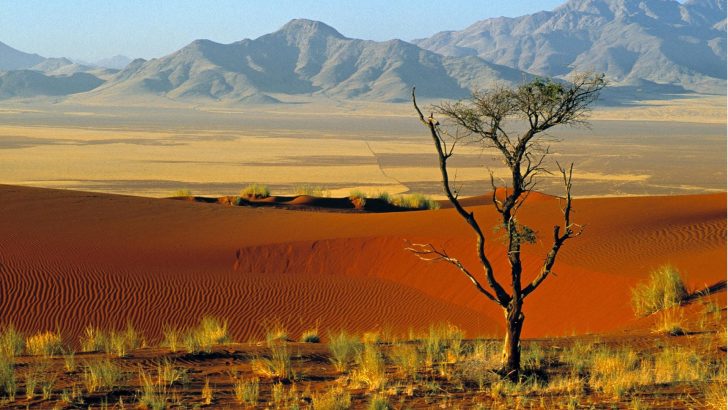 This country is known for its wonderful natural attractions such as the Kalahari desert, Namib desert, the Fish River Canyon Park, and the Etosha National Park, while at the same time being the country that produces some of the world’s highest quality diamonds.

Its people speak as much as nine different languages, some of which are the famous Khoisan languages, spoken in “clicks” that are a completely strange turf for most of the world.

Namibia is very similar to South Africa, and if you’ve ever traveled to one of these countries, you will have no problem finding your way in the other one.

There are some subtle differences regarding languages, where in South Africa people may choose to speak English, while in Namibia, speaking Afrikaans is a matter of national pride.

People in Namibia are very friendly to all races, tourists are welcome, and their country is rather peaceful.

Namibia is, for the most part, a safe country to visit. However, it does have a rather high crime rate. Crime is a serious issue in Namibia's capital Windhoek and other areas throughout Namibia. Incidents such as muggings and bag snatching happen frequently, especially in areas frequented by foreigners.

Tourists driving in urban areas should be aware that taxis often stop abruptly to pick up and release passengers, which results in frequent rear-end collisions. The public transport system, on the other hand, is very limited and, compared to other African countries, there are only a few buses traveling along the main roads. For the visitor, the best choices of exploring Namibia are on a tour, or to self-drive.

The most common types of petty crime are pick-pocketing, purse-snatching, vehicle theft, and vehicle break-ins. However, applying common-sense precautions such as not leaving valuables in visible spots in parked cars, holding your purses tightly and being wise when carrying them, keeping wallets in front pockets, and being alert to one's surroundings should be enough to prevent these incidents. Theft from motor vehicles is also a possibility.

There are several annual natural disasters threatening Namibia, including floods, droughts, and fires. However, they are not of a severe gravity, and the last natural disaster was a devastating flood that caused widespread displacement.

Muggings do happen in Namibia, so beware when handling money near ATMs. The highest percentage of such crimes occurs outside the city center, and according to the police, taxi drivers are accomplices to the robbers. Places, where muggings and robberies are common, are the Walvis Bay, Swakopmund, and Henties Bay areas. Kidnapping, however, is a rare occurrence in Namibia.

Although there's no recent history of terrorism in Namibia, attacks can't be ruled out.

Scams happen regularly in Namibia. They vary from offers to sell rough diamonds or precious stones to tourists, (where the "diamonds" turn out to be worthless) to someone simply trying to divert you so that their partner can steal your wallet, bag, or cell phone. It is recommended for tourists to maintain maximum awareness if approached by strangers for any reason.

Namibia is relatively safe for solo women travelers. Just use your common sense and be aware of your surroundings at all times. Avoid wearing purses and do not walk alone at night or ride in taxis after 9 pm.

So... How Safe Is Namibia Really?

Namibia is a peaceful country, relatively safe to travel to and it is not involved in any wars.

After the Angolan civil war in 2002, there is no more violence in Namibia.

It does, however, have a relatively high crime rate with muggings near ATMs, pickpockets roaming around and even robberies happening more and more.

It is not uncommon for tourists to get robbed of their belongings, someone snatching their bags, etc.

It is not wise for men to travel alone in taxis in Windhoek or Oshakati after midnight, and for women, after 9 p.m. Windhoek, being the capital city of Namibia, is not the safest destination for tourists.

For example, electric fences are installed in almost every house in Windhoek.

Also, the highest number of robberies takes place just outside the city center, and according to the police, taxi drivers work with the robbers.

They spot vulnerable tourists and phone the robbers who then plan the entire robbery.

However, if you are alert at all times and take basic precaution measures, you should have no problems.

Also, robberies are common in the Walvis Bay, Swakopmund, and Henties Bay areas.

This problem is actually more serious than it is reported.

Another issue in Namibia is people driving under the influence of alcohol.

This is becoming more and more of an issue because most people consider it no problem.

Be especially alert when driving or walking during weekends and weekend evenings.

How Does Namibia Compare?