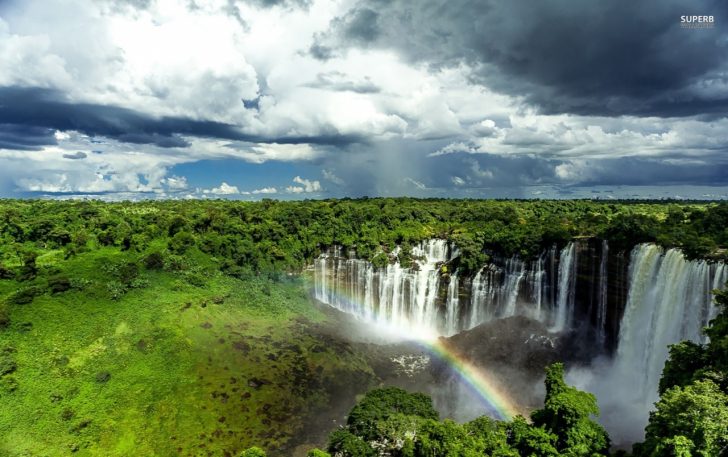 Angola is a country located in Central Africa, sharing its borders with Namibia in the south, Zambia in the east and the Republic of Congo, as well as the Democratic Republic of the Congo in the north.

This country is overflowing in natural resources.

Its large reserves of oil, diamonds, hydroelectric potential, and rich agricultural land make it a unique gem in Africa, even though despite this, Angola is still very poor.

The reason for this is that is has been ravaged by a bloody civil war that lasted from 1975 to 2002.

However, in spite of this Angolans refuse to blame the war for the situation their country has been in.

They behave as if there was no war and as if they haven’t suffered any losses, even though the traumas of this event is deeply rooted in all of them.

Music is their heart and soul and it can be heard anywhere, with locals just trying to come up with excuses to throw a party.

Angola boasts a wide range of music, mainly Kuduro, Kizomba, Semba, and Tarrachinha, with Tarrachinha being more a sensual music genre than all the others.

You will have a marvelous time in this poor country, filled with warm and loving people yearning for the best things in life.

If you're looking for a safe place, free of crime, you might be headed in the wrong direction! You should be very careful, and stay vigilant at all times. Keep in mind that Angola is a country ridden with both petty and violent crime. Apply all precaution measures.

Transport is not very safe in Angola. Many types of crimes actually have happened on the roads of Angola as they are filled with criminals waiting to rob you or carjack you. It is always a good idea to negotiate everything in advance and never pay upfront.

Street crime such as pickpocketing and bag snatching is a large threat here, and pretty frequent at that. What is more, there's a danger of these incidents turning violent if performed by someone who's armed. Be very careful in certain places in Luanda, such as the Roque Santeiro market and Rocha Pinto and in between bars and restaurants on the Ilha do Cabo.

The most frequently reported natural disaster in Angola is flooding. Floods are a seasonal occurrence in this country and they have, in the past, taken many lives, and lead to destruction of houses and horrific material damages. They cause landslides, deep ravines and soil erosion which affect over 18 provinces in Angola annually.

Violent crimes such as rapes, robberies and murders involving tourists have occurred in the northern province of Cabinda. Also, be very careful when pulling over on roadways as you might easily get robbed this way.

There are plenty of scams and frauds performed in Angola with a goal to steal from tourists. Pay special attention to your belongings at Luanda airport, as their personnel in the past have been known to commit fraud. Be wary of anyone trying to distract you, or anyone offering help. Check your change twice and negotiate your rides before stepping into a vehicle.

Angola isn't very safe for female solo travelers. It is highly advised that women stay out of the streets at night, though this advice applies to anyone, really. If you are a woman and you do visit Angola alone, use your common sense and be aware of your surroundings at all times. Avoid wearing purses and do not walk alone or ride in taxis at night

So... How Safe Is Angola Really?

Although there are precautionary measures that will help you minimize your chances of getting hurt, crimes of all kinds are rife in Angola.

As in most places, the majority of these crimes is targeted towards locals and usually happens between locals themselves, in this case, Angolans, but foreigners are being more and more targeted during the recent years.

Rapes, robberies, and murders often targeting tourists have occurred in the northern province of Cabinda.

Other types of crimes usually have to do with incidents on the roads.

Avoid walking on the “Serpentine Road” in front of the U.S. Embassy and in addition to that, serious crimes such as rape and attacks tend to happen in local bars and clubs.

Women should avoid going anywhere alone at night, but then again, it is recommended for everyone to just steer clear of the streets of Luanda after dark.

When it comes to roads, avoiding pulling over on roadways, as you might get robbed this way, especially in rural areas.

Car-jacking is also possible, and if you plan on traveling anywhere outside Luanda, bring someone experienced with you or just go with a group that knows its way around.

The third thing to keep in mind is that Angola is ridden with illnesses common all throughout Africa.

Its rates of life expectancy and infant mortality are ranked among the worst in the world, partly due to poverty and partly due to disease.

You can catch anything from malaria to rabies during your visit.

How Does Angola Compare?