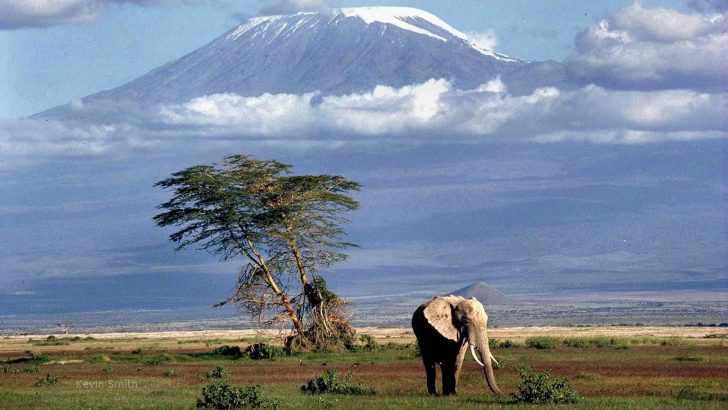 Tanzania, the largest country of East Africa, officially the United Republic of Tanzania, is located in eastern Africa within the African Great Lakes region.

It shares borders with a great number of countries: Kenya and Uganda to the north, Rwanda, Burundi, and the Democratic Republic of the Congo to the west, and Zambia, Malawi, and Mozambique to the south.

A large portion of the country is made up of a central plateau between 900 m and 1800 m.

But, this doesn’t make Tanzania geographically monotonous: what cuts across the country are mountain ranges of the Eastern Arc and the Southern and Northern Highlands forming a part of the Great Rift Valley.

Not only that it’s not monotonous, but it’s also actually geographically extremely diverse, with the world-known highest peak of Mount Kilimanjaro, and the lowest point of the land – which is the lake bed of the, again, world-famous Lake Tanganyika, as well a portion of the largest lake in Africa (Lake Victoria), which makes traveling to this country a unique experience for any tourist.

If you go and visit Tanzania, chances are you will have no negative experiences or incidents. However, it is a country where you should be vigilant and take all possible precaution measures in order to minimize the risk of something going wrong.

Public transportation is not the safest or the most convenient option: you are highly advised to call your reliable taxi driver instead of hailing one on the streets, and public transport is where the pickpockets and thieves operate.

There is an extreme threat to petty crime. Pickpockets are practically an everyday occurrence. You should be extremely careful when handling your valuables and never carry your money in a purse or a pocket. Never carry all your money in the same place, and be aware of your surroundings at all times.

There is also a risk of getting mugged and violent crimes aren't really rare in Tanzania. Avoid traveling alone, even within Lomé city limits, especially at night. It’s generally recommended not to resist armed attack.

Tanzania is also targeted for terrorist attacks. Even though there haven't been major terrorist attacks in its recent history, apart from the bombing of the United States embassy in 1998, it suffered many smaller incidents, and most of them are performed against local security forces,

When it comes to scams, there is a high risk of getting scammed in Tanzania: children might try and fool you just to steal from you in the end, and others might try to distract you. There are also scammers impersonating officials or authorities and trying to extort money from you. Apart from that, double check your change and negotiate everything in advance.

Tanzania isn't exactly the safest place for a woman to be visiting alone. If you do, be sure to avoid remote streets, both during day and night, and do not flash your belongings or handle money in public. Stay out of the streets at night and be vigilant for any possible dangers at all times.

So... How Safe Is Tanzania Really?

Tanzania is mostly safe to visit, though caution is recommended especially in tourist areas such as Arusha, Stone Town (Zanzibar), and Dar es Salaam.

Apart from petty crime on the streets of Tanzania in the form of pickpocketing, bag snatching and common scammers that operate in crowded areas such as markets, like Kariakoo and bus or train stations, there is also a violent crime, and violent crime against foreigners is not altogether uncommon either, so be very cautious.

When it comes to pickpockets, be especially wary of children running around, since they’re mostly forced into a life of crime and they might try and steal from you.

Another safety issues are taxi drivers and you are highly advised to call a taxi you trust instead of hailing one on the streets.

If you must take a taxi that is unknown to you, take its number and send it to someone you trust so that they can track it, just in case something happens.

Also, bear in mind there are scammers impersonating police and authority, trying to extort money from you while flashing “immigration papers” at you.

How Does Tanzania Compare?