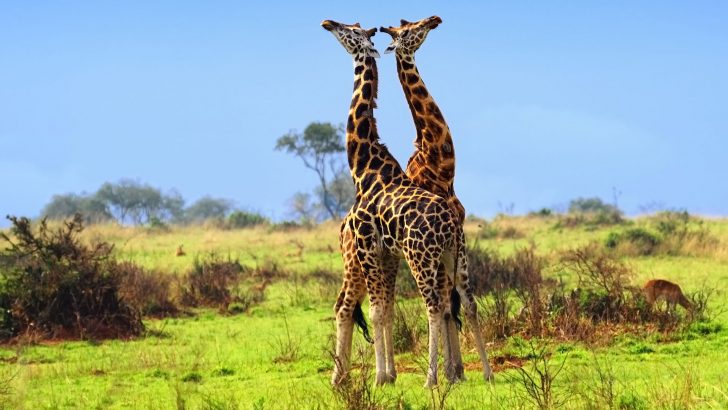 Uganda is a country located in East Africa that shares its borders with Kenya to the east, South Sudan to the north, the Democratic Republic of the Congo to the west, Rwanda to the southwest, and Tanzania to the south.

Uganda is one of the East African countries that is greatly diverse when it comes to fauna.

In this country, famously called the Pearl of Africa by Winston Churchill, you can go gorilla tracking, chimpanzee tracking since it is home to some of the highly endangered species of the mountain gorilla and the endangered chimpanzee.

You can also experience the unique Ugandan safari in the North where the landscape mostly consists of savannas and flat and dry land.

If you move to the West, you will encounter mountains and the center of the country is rich with vast forests.

Visit the gorgeous national parks in Uganda for a complete adventurous experience without feeling like a typical tourist: these national parks are generally not crowded.

Uganda is relatively safe to visit, though it has extremely high crime rates, of both violent and petty crime. You should be vigilant and take all possible precaution measures in order to minimize the risk of something wrong happening.

Transport is highly unsafe in Uganda. According to the World Health Organization (WHO), Uganda has one of the highest rates of traffic fatalities per vehicle in the world. It is highly recommended against driving in Uganda, as their roads are poorly maintained and lit. Remain vigilant in public transport as you might get your pockets picked.

There are many natural disasters that can threaten your trip to Uganda: droughts, floods, hailstorms, famine, landslides, rainstorms, epidemics are all possible threats for tourists.

Violent crime is common in Uganda so be extremely careful when handling money. The biggest risk when it comes to violent crime is so-called "Boda Boda" drivers that are known to assault or harass you outside of clubs or bars.

Terrorists are likely to try and carry out attacks in Uganda. In 2010 there were bomb attacks in Kampala at locations that streamed the World Cup final where over 70 people were killed and many more were injured. Al-Shabaab claimed responsibility and linked the attacks to Uganda’s military presence in Somalia and, furthermore, threatened that more attacks would ensue.

As in any country, there's a risk of getting scammed. Be wary of people trying to distract you in order to steal from you and of taxi drivers overcharging you for a ride. We advise you to be extremely careful when handling money and around ATMs.

Uganda isn't the safest place for a woman to be visiting alone. If you do, be sure to avoid remote streets, both during day and night, and do not flash your belongings or handle money in public. Stay out of the streets at night and be vigilant for any possible dangers at all times.

So... How Safe Is Uganda Really?

Uganda is relatively safe to visit, and after 25 years of Yoweri Museveni’s ruling, the country is finally stable.

But though this country is generally safe, there are many dangers that can befall a tourist, so you should be very careful.

There are some parts of Kampala that can be unsafe, and tourists are advised to stick to the beaten path.

The most common forms of crimes you’ll encounter in Uganda are pickpocketing, bag-snatching, snatching of vehicles both occupied and unoccupied, but they will rarely involve violence.

As in any urban area, parts of Kampala can be unsafe.

One is well-advised to remain in tourist areas, but sensibly garbed visitors not dangling the latest cameras, flashy jewelry or bulging bags are not likely to draw unwanted attention to themselves.

Violence is only expected if the victim attempts to resist and denies handing over their valuables.

There have also been reports of “Boda Boda” drivers (motorcycles for hire) sexually harassing and assaulting the female passengers of two tourists that went to a nightclub in the Kisamenti area of Kampala.

Be extremely careful when going out in Uganda, especially to bars and clubs where you might encounter dangerous or intoxicated people.

Another issue to keep in mind is that, according to the World Health Organization (WHO), Uganda has one of the highest rates of traffic fatalities per vehicle in the world.

Driving in Uganda is highly advised against, especially inter-city traveling, as their roads are poorly maintained and lit.

At night, there are many driving hazards such as bumping into broken-down vehicles left on the road, pedestrians that roam the roads, drunken and reckless drivers, stray animals jumping onto the road – all this apart from the already mentioned poor road conditions.

How Does Uganda Compare?