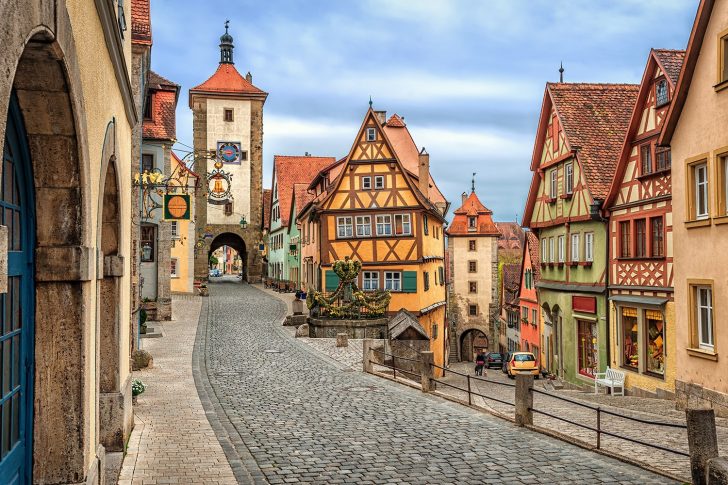 Germany is a country located in central-western Europe, and it’s comprised of 16 constituent states, with about 82 million inhabitants.

It is a top tourist destination because it offers a mix of tradition and modernity.

In Bavaria, you can visit its breathtaking baroque palaces while in Berlin you can explore famous historic sites such as the Brandenburg Gate and contemporary art galleries.

It is this mix of historic and contemporary that makes Germany such an appealing tourist destination.

However, it’s not just castles, art and beer in Germany.

It is much more than that, and apart from its cultural heritage, Germany boasts a large variety of different landscapes.

In the north, it has a coastline along the North Sea and the Baltic Seas in an area called the North German Plain.

The East Frisian Islands just off the coast are also gorgeous, even though mostly visited by the local Germans themselves.

There are even white sand resorts along the Baltic Sea, including Rügen and Usedom.

Germany is very safe to travel to. Your biggest worry, when traveling to Germany, should be the pickpockets and scammers. If you apply basic precaution rules, that should minimize the risk of something going wrong.

Transportation and taxis are generally safe and reliable in Germany, but do be careful in public transport, as it's a place where pickpockets operate.

As in any European top destination, there are pickpockets at popular tourist landmarks. Follow your common sense and remain vigilant at all times, especially in public transportation and at crowded stations.

There is no particular threat of natural disasters in Germany, except for some earthquakes that happen every now and then.

There have been terrorist attacks in Germany's recent history, but, thankfully, they resulted in only a few casualties. No tourists have been targeted, but extreme vigilance is advised.

As in any country, especially a top tourist destination, there is risk of getting scammed. Be wary of people trying to distract you or offering you unwanted help, check your change twice and always negotiate every service beforehand.

Germany is very safe to travel to, if you are a female traveling solo. Apart from a few general precaution rules you should apply, such as not walking alone in poorly lit and deserted areas, not finding yourself in strange company at night, etc, you can relax because Germany is very safe in this respect.

So... How Safe Is Germany Really?

Germany is a very safe country to travel to.

Its crimes rates are low and the law is strictly respected.

The most common form of a crime you’ll probably encounter is pickpocketing or bicycle theft.

Violent crimes such as homicide, robberies, rape or assaults are also not an issue in this country, especially not compared to most African and American countries.

You might encounter pickpockets in large cities or at events with large crowds.

Avoid crowded places, and apply extreme precaution when in public transportation or on bus or railway stations (airports, too).

You should also keep in mind that begging exists in some larger cities, and even though it’s not a serious issue, be careful and avoid getting into altercations with aggressive beggars, should they cross your paths.

Some beggars are organized in groups.

Bear in mind that flashing any cardboard sign very near to your body could be a pickpocket trick, as well as attempts to distract you in any way.

You should also expect street demonstrations if your accommodation is in Berlin or Hamburg and if you’re traveling somewhere around the first of May.

These demonstrations occasionally evolve into clashes between the police and a minority of the demonstrators.

How Does Germany Compare?