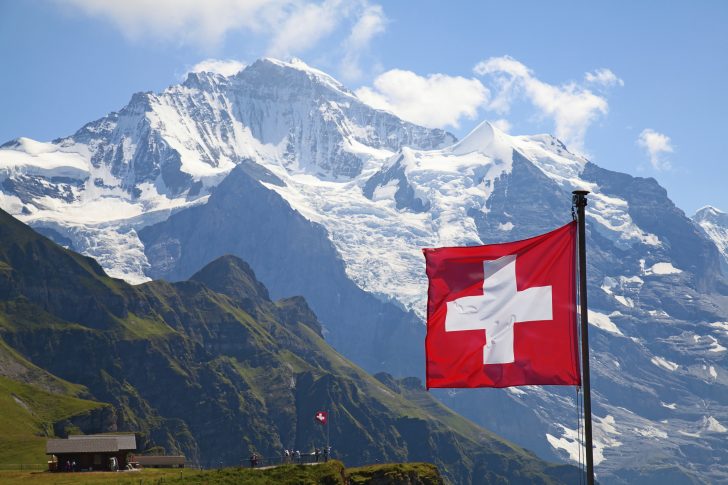 Switzerland is a beautiful, peaceful country in Central Europe.

It’s squeezed in between France to the west, Italy to the south, Austria and Liechtenstein to the east, and Germany to the north.

Undoubtedly, Switzerland’s biggest pride is its nature, since it flaunts magnificent mountains that it’s known for (the Alps in the south, Jura in the northwest), but also rolling hills, wonderful lakes, plains, and sweet little towns with gorgeous, vivid scenery.

Apart from its nature, Switzerland showcases a perfect example of three civilizations living and respecting each other in one country.

Up in the northeastern part of the country, you will encounter the squeaky clean, 8-to-5-hard working Swiss-German-speaking Switzerland; then, as you move to the southwest you get a bit more relaxed vibe with the wine drinking and hedonistic French part of Switzerland.

As you go further to the southeast, south of the Alps, you will encounter cappuccino-drinking charmers enjoying the sun in Italian-style piazzas; finally, right at the center of the country, you will find classic Swiss alphorns and mountain landscapes Switzerland is known for around the world.

Switzerland is very safe to travel to. It is a country where every law is respected and the police are doing their job very meticulously. Still, don't let your guard down and be vigilant at all times.

Transportation in Switzerland is very safe, and there are no problems with taxis except that they are very expensive. Be prepared when traveling to the alpine areas and equipped with snow chains and winter tires.

Pickpocketing is not an issue in this country, though it does happen from time to time. Never leave your valuables in plain sight or carry your belongings in your back pocket, easily accessible for someone to steal.

As for natural disasters, there are some you may encounter, but mostly in the alpine areas of the country, such as avalanches, snowdrifts, landslides, flooding, thunderstorms, snowstorms, etc.

Do not worry about mugging or kidnapping: it doesn't happen in Switzerland. Recently, there has been only one area in the entire country that has had several reports of mugging - Seebach district of Zurich.

There haven't been any terrorist attacks in Switzerland's recent history, but they shouldn't be ruled out so be vigilant at all times.

Scamming is also not common in Switzerland, but you should still check everything twice (especially your change), negotiate everything beforehand, and be careful when shopping with your credit card because some establishments give out checks with the entire number of your credit card printed out.

Switzerland is very safe for female solo travelers. Still, do not let your guard down, and follow the rules of common sense, such as not walking around alone at night or along with deserted areas.

So... How Safe Is Switzerland Really?

It’s no surprise that Switzerland is a very safe country to travel to.

It’s actually considered to be one of the safest in Europe.

However, since it attracts a certain type of tourists (namely, mostly rich people visit Switzerland) and it is crowded with a well-off population, it is expected that an occasional pickpocket might be roaming around the streets or popular landmarks at all times.

Be very careful with your valuables and never leave them in plain sight.

Another issue that you have to take into account when traveling to Switzerland is that there is a number of Swiss establishments that will print your entire credit card number onto the receipt, that way enabling identity theft when shopping with a credit card.

Therefore, if you are using credit cards, you should carefully review the information printed on all receipts before discarding them.

This happens, for instance, in some book and clothing stores.

Fortunately, the list of such establishments isn’t too long, so just be a bit more careful when paying with credit cards.

Women traveling alone should have no problems.

The only uncomfortable circumstance is that sometimes the youth of Swiss tends to be fairly open with public displays of affection, sometimes too much open, and women may find such unwanted attention tiresome, especially in the wee hours in front of clubs and bars.

However, they are very easy to get rid of, by simply walking away.

How Does Switzerland Compare?