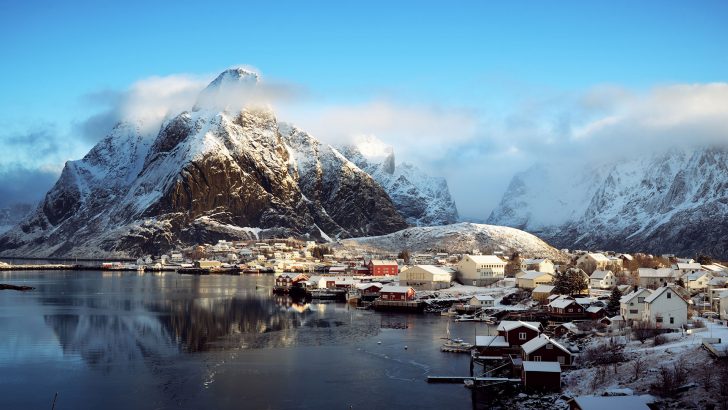 Norway is best known for the complex network of fjords spreading along its west coast which stretches from the North Sea near Denmark and Scotland into the Arctic Ocean and shares borders with Finland, Sweden, and Russia.

This country boasts a gorgeous landscape shaped by the Ice Age, filled with mountains, waterfalls, forests on hills and valleys, and a long coastline with fjords, islands, and mountains growing directly from out of the water.

Norway is well known for its landscapes, mainly its fjords in the western part of the country that are long inlets, flanked on either side by tall mountains.

Apart from the fjords, the major part of the land consists of rocky wilderness…

… This leads to another interesting fact about Norway:

due to this rocky wilderness that takes up such a large part of the country, there are many, many huge, completely unpopulated areas (in time, converted to national parks) which makes Norway one of Europe’s most sparsely populated countries.

Norway is very safe, generally. Crime rates are low and the most common form of crime is bicycle theft and break-ins. The biggest threat for tourists lies in the nature of Norway.

Transport is, overall, very safe and reliable in Norway, but be careful on public transportation as it's the place where pickpockets operate.

There is some risk of encountering a pickpocket, especially in larger cities such as Oslo or Bergen. Apply the basic laws of precaution to avoid such a situation, and follow your common sense.

The biggest threats for tourists lie in nature. Always follow what the signs say, and the advice of authorities. Never approach glacier fronts, big waves, or waterfalls unless you know what you're doing, and do not go to Svalbard without a professional accompanying you.

Norway is mostly safe when it comes to mugging and kidnapping, but it is recommended that you avoid poorly lit and deserted streets and dangerous areas known for street crime.

Even though there haven't been any terrorist attacks in Norway's recent history, they shouldn't be ruled out, especially since other European countries in its vicinity have been targeted, so it is best to remain vigilant and alert.

Single women shouldn't have any problems, although special vigilance is advised after dark. Avoid the inner east side of Oslo at night because it has become more dangerous during night hours in the past couple of years.

So... How Safe Is Norway Really?

Norway is a very safe country to travel to.

Its crime rates are low, and the most likely crimes that you’ll encounter are petty theft and car break-ins.

Still, you should be wary of pickpockets, since they are an increasing issue in larger cities and towns, especially during summer.

However, the problem with pickpockets is nowhere near other European top destinations so only a few precaution rules should minimize your chances of anything going wrong.

Always take care of your belongings and keep them close by your side or safely in your accommodation, and never leave them in a visible place of your car.

Also, make sure to lock your bike safely even for short periods of time.

The greatest threats to tourists in Norway are actually nature threats.

Every year, a number of tourists get hurt or even killed in the mountains or on the seas, usually due to not following given advice or signs with warnings along the way.

For example, avoid approaching a glacier front, big waves on the coast, or a big waterfall unless you know what you’re doing, and never walk on glaciers without proper training, equipment, or a professional to accompany you.

Special precaution is needed in Svalbard, where you should never go without someone with a weapon accompanying you.

They are strong, quick, curious, and aren’t afraid of people, but will shy away at the sound of a gunshot.

How Does Norway Compare?