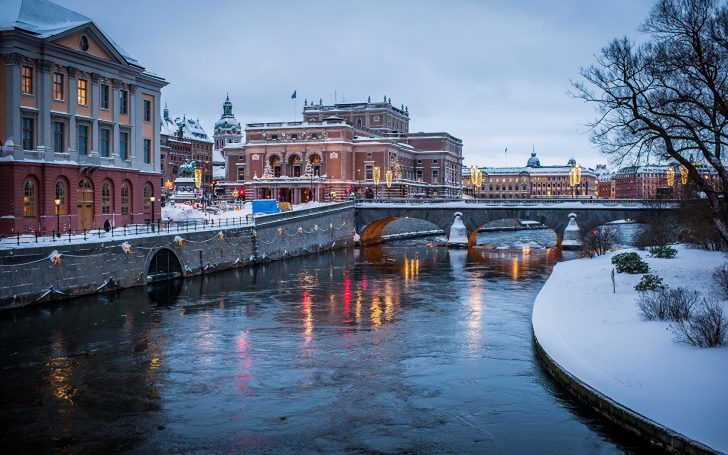 Sweden, the largest of the Nordic countries, is located in northern Europe, on the Scandinavian Peninsula.

It shares borders with Norway and Finland and is connected to Denmark via the bridge of Öresund (Öresundsbron).

To the east of Sweden lies the Baltic Sea, along with the Gulf of Bothnia, which separates Sweden from the biggest part of Finland.

The interesting fact, when it comes to Sweden’s geography is that its northernmost part belongs to the Arctic.

It is a country with a population of about 10 million yet its pride isn’t the modern cities and contemporary architecture, but its gorgeous natural beauty.

Leaving the city behind means really appreciating what this country has to offer.

Tourists can choose from a variety of options: sailing across an archipelago, visiting a lonely island, trekking along Sweden’s northern wilderness… these are just some of the options you can enjoy when visiting this breathtaking country.

Skiing, skating, hiking fishing, and foraging for mushrooms and berries are popular Swedish pastimes and hobbies, and you won’t be able to resist joining them in these activities.

Sweden is a very safe country to visit, but that doesn't mean you should let your guard down: crime has been on the rise since the '80s and petty crime exists in most countries in the world, so exercise caution at all times.

Taxis and other means of transportation are very safe and reliable in Sweden.

When it comes to natural disasters, there are some risks, mostly connected to the fact that, during winter, this country is below freezing point. Dress accordingly and expect snowstorms and extremely cold temperatures.

Mugging is uncommon in Sweden, and so is kidnapping. However, as in any country, it is recommended that you remain vigilant at all times. Be wary of people trying to distract you, as it might be a trick to try to steal from you.

As in most countries of the world, there will always be people trying to scam unsuspecting tourists. The risk of scammers is not too high, but you should still double-check everything. Be wary of people offering you help with anything or giving you unsolicited advice or directions.

Sweden is generally safe for women traveling solo, except in some parts of it, such as Rinkeby in Stockholm, after dark. Just follow the rules of common sense such as avoiding deserted and poorly lit streets and areas, and your trip should go smoothly.

So... How Safe Is Sweden Really?

Sweden is generally very safe to visit, even though since the ’80s crime rates have steadily been on the rise, so watch out when walking the streets of Sweden especially at night and during weekends.

There are also areas to be avoided such as Rinkeby in Stockholm, with violent crimes and robberies being more and more common.

Bear in mind that in the rural areas of Norrland, the nearest patrol car might be a hundred kilometers away, and the majority of Sweden is actually quite weakly policed.

If you see a street fight, just keep a safe distance and never get involved in one.

There have been reports of young people being injured or even killed after trying to intervene in a street fight.

Young people, usually when drunk or otherwise intoxicated are a real threat in this country, so it is best to avoid them.

Never argue with security guards or bouncers since they are legally allowed to use force if needed and they will use that legal power against you.

Generally, Swedes are known to avoid eye contact, especially in dangerous or uncomfortable situations, so avoid looking them directly in the eyes as it might provoke them if such a situation presents itself.

As for pickpockets, they do operate, but it isn’t a serious issue in this country.

They usually operate in tourist-frequented areas and crowded places such as airports, bus and train stations, and shopping areas.

Most Swedes feel comfortable carrying their cash with them but still exercise caution.

Also, if you’re using bicycles, lock them safely before moving away.

How Does Sweden Compare?