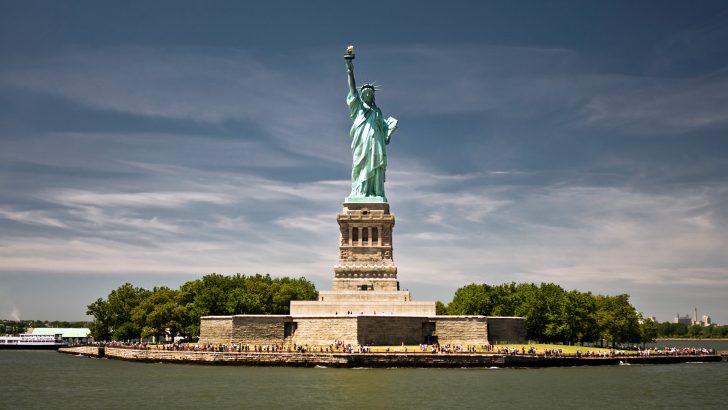 The United States of America, also known as America, the U.S., or USA, is a vast region with 50 states to explore.

48 of the states are known as the “contiguous U.S.”

Alaska and Hawaii are both states but not directly connected by land to the main portion of the country.

There is also a group of locations known as U.S. Territories but aren’t technically states.

Throughout the U.S., there are different regions to explore, each bringing its own unique qualities and safety risks.

The country has four time zones on the mainland, starting with the Pacific Time Zone on the West Coast and adding up to three hours until you reach the Eastern Seaboard.

Hawaii has its own time zone, which is three hours behind the Pacific Time Zone.

Part of Alaska is on the Hawaii/Aleutian Time Zone boundary, and the other part is known as the Alaska Time Zone.

The different regions of America might have some slippery boundaries in the title alone.

For example, the exact boundaries of the South have long been debated.

Texas likes to be its own location, not wanting to be considered the South or desert Southwest.

In general, the regions are, starting from the west and going east:

The United States has seen a surge in violent crimes and homicides over the past few years, with gun sales increasing and an opioid epidemic growing with fentanyl-laced drugs on the streets.

If you are considering visiting from another country, the reports of mass shootings and violent crime might scare you, but there are no crime trends showing tourists are at a greater risk.

There’s also an overall challenge of finding enough law enforcement officers to hold people accountable while giving criminals the due process they are constitutionally guaranteed.

There's a low overall risk, but that risk can change quickly depending on which city or state you visit. Homeland Security oversees terroristic threats on a global scale, the FBI investigates crime on a federal level, and communities are either served by law enforcement locally or county-wide.

In most cities larger than 20,000 people are going to have public transportation in the form of buses, light rail systems, or trains. There's a strong network of highways across the country. Some highways have tolls, but the majority are toll-free. Rideshares are very popular, with Uber and Lyft dominating the business, while taxis are still available too. Many people find rideshares to be less expensive. Rental cars are widely available. For non-US residents, you need an International Driving Permit (IDP) before you leave your home country. You cannot get an IDP in the U.S. if you are a citizen of another country.

Any larger city or high tourist traffic area will have a higher pickpocket rate. Places like Disney World, beaches, and New York City should be approached with medium risk. The truth is, pickpocketing or purse snatching can happen anywhere. Always carry as little as necessary with you and use concealed pockets for important items like cash, passports, and hotel keys.

Each section of the country has its own risks. All cities or counties also have an Emergency Management Department that lists local risks and safety plans. Tornado season heats up in the Midwest and South in the spring. Hurricane season runs along the Atlantic and Gulf of Mexico coastlines from June through October. Wildfire season out West happens in the summer, but wildfires have been growing in intensity and can last well into the fall. Winter brings heavy snow to the northern and northeastern states, but there's not always going to be snow on the ground.

The risk of being mugged is city-dependent, so review our local reports of cities before you visit. You should know that police in every city will tell you never to fight back against a robber, as it's not worth risking your life over a mobile device, wallet, or personal item.

Homeland Security and state-wide investigation bureaus protect each state, but some places are at a higher risk. Any large population area is going to get a higher risk. Nearby military bases increase risk as well. Remote areas are at a smaller risk but could also be a hiding place for what's known as "homegrown terrorists." The "See Something, Say Something" motto spans across the country. It encourages people to report any suspicious activity - even something as simple as an abandoned piece of luggage.

The Better Business Bureau is a great resource to find local scams happening in the region or city you plan to visit. Rental scams are a big challenge in tourist areas. In these cases, scammers will steal photos of legitimate properties but falsely advertise that they are for rent. Potential tenants are asked to wire money ahead of time to secure the property. When travelers arrive, there is no rental home available and no way to recoup that lost money. You should also be wary of any deal that seems too good to be true or where you are pressured to make a decision.

Women should always proceed with caution when visiting a new location. As exciting as going on holiday is, don't bring high-value items like designer bags or expensive jewelry. It just risks making you a target for a would-be thief. A new trend in nightlife safety involves a woman who feels uncomfortable with the way another patron is treating her to go to the bar and order an "Angel Shot." It's a simple way to tell the bartender you are in a tough situation and need help without alerting the person bothering you.

Each water utility is required to provide a Consumer Confidence Water Quality Report yearly. Those reports are required to be on the utility website for review. You can also call the Safe Water Hotline 24/7 at 800-426-4791 if you have specific questions about any location's water quality.

Disney World or Disneyland, located in Orlando, Florida, and Anaheim, California, are safe places to visit, with cities built around them to accommodate larger tourist crowds.

There will be a greater risk of petty thefts and a greater security presence on all levels – from business security guards to law enforcement to Homeland Security offices.

The Grand Canyon is one of the eight wonders of the world and brings in a lot of tourists throughout the year.

Visitors can also parlay a trip here to see Phoenix or Sedona, Arizona.

Parks throughout the U.S. are listed at a national, state, or local level.

For example, Yellowstone is a National Park, while Cumberland Falls in Kentuck is a state park.

Entrance fees and laws might slightly differ, but there are no identification requirements that make one preferable over another.

Las Vegas is one of the top tourist attractions in the world, with a 24/7 lifestyle with budget-friendly options all the way to the lap of luxury.

Local casinos also dot the landscape of the famed “Las Vegas Strip,” and there are natural attractions nearby like Hoover Dam and Red Rock Canyon.

We’ve broken down the reports on this website into the individual cities and suburbs of these regions, so you have the best possible information.

The beaches of Florida, North & South Carolina, Georgia, Mississippi, and Texas (not an exhaustive list) are popular as well, but crowds will build up during Spring Break and winter when the heat and humidity aren’t as intense, and there isn’t a hurricane possible.

A trip to Hawaii or Alaska might feel like you’re going to a different country, but it’s still subject to the federal laws of the United States.

Each state has its own rules too.

For example, Hawaii is very particular about pets coming in due to it being a “rabies-free” environment.

Alaska will have days with more than 20 hours of sunshine or darkness since it’s so far north.

Places to Avoid in United States

There isn’t any place you need to avoid when visiting the United States, but you should research the climate before you go.

If you want a beach getaway, there’s a difference between the crowds of Miami and the laid-back nature of Sarasota.

If you don’t like humidity, you might enjoy the desert southwest, with an arid climate but temperatures that get into the triple digits half the year.

If you want big crowds, going to Wyoming isn’t going to be a good idea, but if you want open country, beautiful scenery, and mountain peaks, you’ll love it.

You should be familiar with the common U.S. holidays, as most government agencies will close down on those days.

Each state might have its own holidays as well.

For example, Nevada Day is celebrated in the Silver State on the last Friday of October.

All city and state offices are usually closed, and school is out statewide.

The places to avoid have “the devil is in the details.”

For example, there are many reasons to visit Chicago – there are also some really dangerous areas.

Iowa is generally considered a nice Midwestern state, but there are some communities battling major drug and crime issues you might not expect.

So... How Safe Is United States Really?

Illegal guns, legally carried guns, violent crimes, murders, drug crimes, and thefts are all on the rise in the United States.

Over the past few years, mass shootings have become more common, and an opioid epidemic has rattled communities from coast to coast.

You should never take a prescription drug unless it’s from a licensed pharmacy like Walgreens, CVS, or Rite Aid.

Drugs are being shipped to the U.S. with potentially deadly doses of Fentanyl inside.

A drug user wouldn’t know the difference when looking at or tasting a drug.

The majority of the crimes are among people who know each other, like gangs or domestic issues between couples or families.

You should avoid any situation where tension is mounting, people are arguing, or where it just doesn’t feel safe.

It’s not as safe as it has been in the past, but it’s also not a place where you need a bullet-proof vest.

Unfortunately, you can’t trust people on the street in America, since there are too many scams that prey on the kindness of strangers.

Trust the people who are paid to help you stay safe, like the concierge at a hotel or a police officer.

Avoid buying anything from the trunk of a car or from someone wandering the street, as gold scams are growing in popularity.

There’s an 11% poverty rate in America, with some cities having as high as 30% of people living in poverty.

You’ll likely see homeless people and panhandlers in any city you visit.

You should not give these people money, no matter how sympathetic you are.

Instead, donate to a local homeless shelter if you are so inclined.

With so many great places to visit in the U.S., there’s no reason to avoid it.

It’s hard to explain the country in one broad stroke, which is why we’ve diligently detailed each state, metro area, and city to help you determine your best path.

How Does United States Compare?