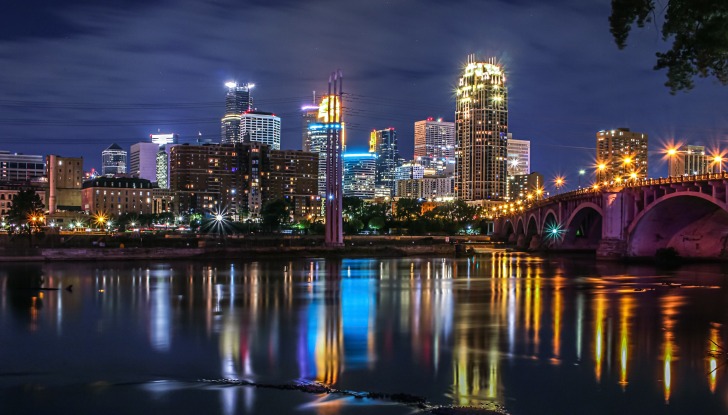 The Minneapolis-St. Paul metropolitan area contains more than half the population of Minnesota.

This leaves a tremendous amount of rural land filled with lakes, rivers, and nature to enjoy.

Minnesota has nearly 15,000 lakes and is the beginning of the Mississippi River.

In the north, there is a natural waterway on the Canadian border that is a few hundred miles long.

Thousands of miles of trails are also available for hiking and cross country skiing in winter.

The winters are cold and harsh, but that opens up a lot of winter-type sports activities.

It also borders one of the great lakes, and you could take a boat from there to the Atlantic Ocean.

Several national parks, monuments, and reserves provide a lot of space for enjoying outdoor activities throughout the year.

There is a lot of farmland and small towns with a lot of character to explore.

There are some real dangers in the Minneapolis area as there are with any large city. Some areas should be avoided. Most of the city is safe. The rest of the state is generally safe as well. Minnesota has had a spike in crime, but its crime rate is close to the national average.

There are some petty criminals, but in the cities, buses and taxis do not have a bad reputation. More rural areas may not have very much public transportation and the lack of it is the greater problem. Taxis are regulated. The only danger is them taking a longer journey than necessary.

We give this a low because there are a lot of areas in Minnesota where this is unheard of. In the Minneapolis metro area, there are some pickpockets, but it is not considered a major issue. Crowded areas around bus terminals are the most dangerous for this type of stealing. Public events outdoors also have this happen at times.

Minnesota is too far inland to have hurricanes, and not mountainous enough for earthquakes or landslides. Some winter storms are very strong and can be dangerous. There is plenty of warning when these are coming. Winter itself is a hazard for travelers in Minnesota. There is a lot of risks then due to snow and ice, but not that would rise to the level of natural disaster.

In the Minneapolis area, there are places where the risk is high, and you should not go alone. In most areas, the risk is low. Minneapolis has gotten a bit of a bad reputation for crime in recent years, but there are safe areas in the city.

Since much of the state is rural, there is little risk because terrorists do not attack rural areas as a norm. There have been riots and violent protests in Minneapolis, so there is that risk, but the actual terrorism risk is low.

There are always con artists in big cities, but there are not a lot of scams out on the street. There might be a fake taxi now and then, or fake tickets to an event, but that is about all. Most scams involve targeting the elderly by phone.

Most of Minnesota is very safe for women, and it is not uncommon to see a woman traveling alone. The dangerous areas in the bigger cities are about the same for men and women. Women should not be out at night alone in the big city. General precautions should keep you safe.

With 15,000 lakes and thousands of miles of rivers, there is a lot of water available in the state. Cities provide good quality water in their water systems. There is virtually no risk with the tap water.

Safest Places to Visit in Minnesota

The safest places to visit in Minnesota are the natural areas.

The state’s only national park is Voyageurs, which is a waterway on the U.S. Canadian border with 200,000 acres of wilderness to explore.

Many camping areas are accessible only by boat.

The Mississippi River begins here, and it has a national recreation area.

There are lots of water sports and hiking to enjoy in this state.

The great outdoors is a very safe place to be, and in Minnesota, there is not a lot of danger from wild animals.

The Minneapolis area has some crime, but some safe areas are worth exploring.

Placess to Avoid in Minnesota

There was a 17 percent increase in violent crime in the state in 2020, and much of that was in the Minneapolis area.

There were a lot of violent protests and looting, and that contributed to the statistics.

The north side of Minneapolis has a reputation for being dangerous.

Minneapolis and St. Paul both have high crime rates, but some smaller towns do as well.

A small town in the southwest, Windom, had 751 violent crimes last year.

There are some areas of Minneapolis that are not safe, and this big city is not as safe as the rest of the state.

You need to be more careful in Minneapolis, and avoid certain areas where crime is high.

Safety Tips for Traveling to Minnesota

So... How Safe Is Minnesota Really?

Minnesota has two distinct worlds when it comes to safety.

Minneapolis-St. Paul is a big metropolitan area and has more than its share of crime and danger.

Then there is the rest of the state, which is largely rural and many areas are protected lands.

These areas are very safe and you should have little concern there.

Violent protests and looting may have been a big part of it, but Minneapolis saw a 17 percent increase in violent crime in 2020.

Even so, the state is still the 12th safest state in the nation.

One source ranked Minneapolis as the 70th most dangerous city in the nation.

There were `15,698 violent crimes and 190 homicides in the state in 2020, and by far most of them were in the Minneapolis metropolitan area.

There is always more property crime than violent crime, and there was a 50 percent increase in 2020 over the previous year.

There has been a substantial increase in crime, especially in the Minneapolis area, in the last year.

Most of the state is rural though, and almost all of that is very safe.

There are also safe areas in Minneapolis.

If you stay in the tourist areas and don’t go into dangerous areas, you should not have any problems.

Perhaps Minneapolis deserves a little more caution, but generally, in Minnesota, you are safe with basic safety precautions.

How Does Minnesota Compare?