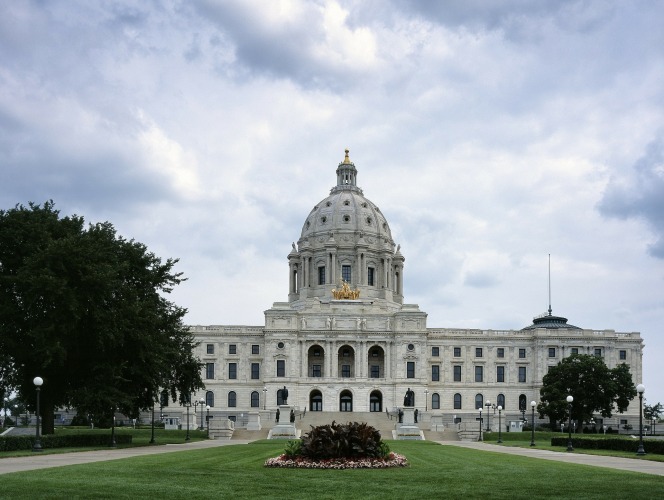 Saint Paul is the smaller of the twin cities in Minnesota with 311,000 people.

Saint Paul is the older of the two and the state capital.

It has the Minnesota Science Museum, known for its dinosaur specimens.

It has a large history center with interactive exhibits.

Its large zoo is free to the public.

It is a more historical and more laid-back city than Minneapolis.

It was a trading post that was chosen as a state capital when Minnesota became a state.

The city is at the confluence of the Mississippi, Minnesota, and St. Croix river, which made it a natural spot for a trading center.

Saint Paul has many tree-lined neighborhoods, a lot of Victorian architecture, and some small colleges.

It has a lot of historic buildings in the downtown area, along with a lot of older homes that give it a pleasant atmosphere.

St. Paul has a higher crime rate than the state and national averages, both in violent and property crimes. It has a lower crime rate than Minneapolis. Like many good-sized cities, St. Paul has its good and bad areas. Some areas should be avoided at all times. Most of the tourist-type areas are very safe during the day, and not overly dangerous at night.

Taxis are available throughout the city. They are licensed and safe. There is more danger of a taxi driver getting robbed. It has a growing light rail system and a strong bus system. It is very inexpensive, and there are free-ride buses in some areas of downtown. It is consistently ranked in the top 10 nationally as one of the best public transport systems.

Pickpockets are not common in Saint Paul or the Twin-Cities in general. It is a tourist area where crowds gather though, and that makes it a good area for a pickpocket to operate in. Keep your belongings safe, and avoid having your wallet or purse where it can easily be reached. With some basic common sense, you should not have a problem in this area.

There have been tornadoes in this area as well as flooding. The relatively flat area of the plains makes it susceptible to both. There have not been any serious events rising to the level of disaster in recent years, so the risk may not be that great. Snow can get very heavy in the winter. Watching out for the weather any time of year is a good idea.

While the tourist areas are relatively safe, it has the problems many cities of this size have. There are some bad areas where you would likely be mugged if you went alone, even in the daytime. If you stick to the tourist areas and do not go out alone at night, you should not have any problem. There is a slight risk, however, and it's good to keep your eyes open.

While it is a major tourist area with a lot of people, there have not been any significant terrorist events in Saint Paul. There have been concerns about rioting and terrorism from extremist groups within the United States, but so far there have not been any major issues. Be aware of your surroundings though, and stay alert because it could happen even if not likely.

There are instances where people seek petition signers and donations through deception, but there are not a lot of public scams. Occasionally, a taxi driver will take the long way to your hotel, or your hotel might overbook as part of a scam. Many scammers operate online and try to steal identities to crack people's bank accounts, but this is not limited to any location.

Women traveling, even alone, are generally safe in the Twin-Cities. This is true as long as you stay in the tourist areas and take normal precautions. Going out at night alone increases your chances of being a crime victim dramatically. There is no indication there is more danger for women than men. Take the same precautions you would at home.

Minnesota is the land of 10,000 lakes, and it has a lot more than that. There is plenty of quality fresh water in the state and the Twin-City area. Water is supplied by the city and meets or exceeds all state and national guidelines. You can drink tap water in Saint Paul without concern.

The safest places in St. Paul are parks and other tourist areas.

It is part of a scenic byway system created in the 1800s.

You will forget you are in a city with all the nature to explore.

A walking tour of Victorian homes along Summit Ave is also popular and safe.

The St. Paul Gangster Tour is also safe and fascinating.

The southeast part of the city is the safest.

The science museum and the observatory are also interesting sights.

The Cathedral of St. Paul is surrounded by statues of saints from around the world.

Historic Fort Snelling and the state capital buildings are also well worth a tour and are very safe areas.

Areas around the river have the highest crime rates, but few people live there, so any crime at all would raise the rate.

Places to Avoid in St. Paul

Saint Paul’s crime rate is above the national average, so there are some bad areas.

Saint Paul ranks at the 84th percentile, meaning 84 percent of cities of the same size nationally are safer.

Your chances of being a crime victim are one in 66 in the southwest part of town, and one in 482 in the southeast.

The western part of town also has a high crime rate.

The Thomas Dale section near the Mississippi River has a crime rate 168 percent higher than the national average, and 200 percent above the violent crime rate.

At night especially, the downtown section has a crime rate 300 percent higher than the national average.

The north-central section, and onward to Minneapolis are the most dangerous areas in general.

Like many larger cities, St. Paul has some nice and safe areas.

It also has some very bad areas that are not even safe in the daytime.

The crime rate is rather high overall, and the city does not have the best reputation.

Property crime is also a major issue, which is twice the national average.

The assault and robbery rates are at least twice the national averages.

At least murder is just slightly higher than the national average.

Petty theft and burglary are also above the national average.

Even though the crime rate is relatively high in St. Paul, it is worse in Minneapolis.

It is about 15 percent higher in Minneapolis.

Much of the rest of the state has a lower than the national average rate.

How Does St. Paul Compare?