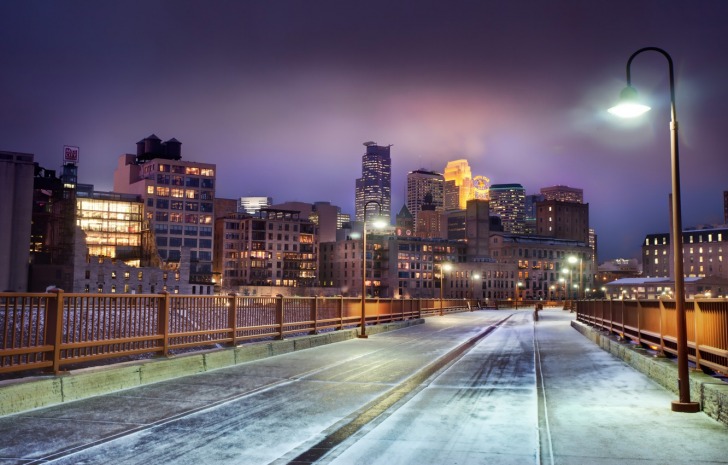 Minneapolis is part of the Twin Cities of Minneapolis-Saint Paul.

If you enjoy cross-country skiing, skating outdoors, and snowshoeing, then you would find the four seasons in Minneapolis to be a huge positive.

There are large Hmong and Somali communities in Minneapolis, and a history of taking in refugees, so the food and restaurant options in town are amazing.

Minneapolis has a fantastic public park system, and its “Chain of Lakes” with walking and biking trails, amphitheaters, and much more is the envy of much of the country.

The four main lakes in the city are all easily accessible and have great facilities for everything from sailing, swimming, paddle boats, fishing, etc.

Minneapolis is, for the most part, safe, but you should take precaution on the streets after dark. Be wary of pickpockets and bag snatching and keep your valuables safe by your side. Never carry all your money in one place or leave your valuables in plain sight in a car or at a beach when swimming.

Public transport is generally safe in Minneapolis, but do be careful on buses and bus stops since that's where pickpockets and petty thieves operate. Be especially careful not to fall asleep, because you may wake up and find your valuables stolen.

You may have the bad luck to stumble into a pickpocket on the streets of Minneapolis. Tourists are recommended to remain vigilant at all times when on the street. Make sure you don't flash your valuable possessions on the street and be careful when withdrawing money from ATMs

Mugging is not altogether uncommon in the streets of Minneapolis, either. In such a situation, hand over all your possessions immediately and do not resist. Avoid poorly lit and deserted areas.

Excluding isolated mass shootings, Minneapolis hasn't been the target of any terrorist attacks recently, but the attacks shouldn't be ruled out. Be aware of your surroundings at all times.

On the streets of Minneapolis, you'll run into shell-game players that will try to get you to play a pseudo-game where a considerable bid has to be paid before a professional player places a nut or small ball below three small shells or cups. They will then rapidly moves the cups, and asks the victim to guess where the nut or ball item is. These people are frauds.

Traveling to Minneapolis is generally safe for solo women, but bear in mind that you should move in the company after dark, never alone. Stay away from poorly lit and deserted streets and areas and from people that are visibly intoxicated or under the influence.

So... How Safe Is Minneapolis Really?

Just like other cities of America, Minneapolis is also home to many tough and dangerous neighborhoods.

Having said this, the crime and the danger only applies to these dangerous areas, and other parts are considered mostly safe.

But it’s no worse than any other major city in America and better than most.

Minneapolis has had a total of only 9 murders in 2016, which is quite small compared to a similarly-sized city like Oakland with 27.

The North Loop and parts of the Warehouse district (the northwest part of downtown) can draw a fairly raw crowd in the summer, and you should pay attention to your surroundings.

Parts of north Minneapolis are as bad as the average major city.

The reason why is that North Minneapolis is poorer and does tend to have more gang activity and shootings than other portions of the city, as well as other forms of violent crime.

But it is still considered a friendly Minneapolis neighborhood, with parks, libraries, family homes, and small shops, and there is little reason to avoid walking there.

Denser, rental-heavy neighborhoods like Uptown and Dinkytown have middling crime levels, more muggings and sexual assaults and such.

The Cedar-Riverside area at night and North Boadway and Washington Avenue, as well as the area around Plymouth Avenue and North Broadway, are some of the most critical parts of the city.

How Does Minneapolis Compare?