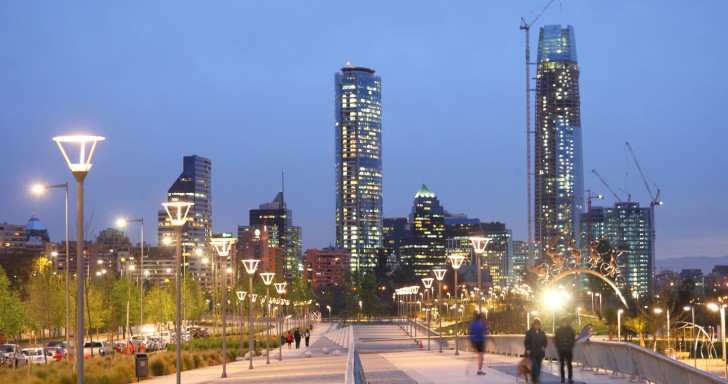 Chile - safety as a country

Santiago de Chile is the capital city of Chile with a great number of citizens which makes it very densely populated.

Besides all this, it is a peaceful, clean and wealthy Latin American city that is developing fast and the city’s economy is very prosperous.

Even though many people tend to visit Santiago de Chile on their way to the Atacama Desert, the city has recently become a tourist destination itself and it is on a constant rise.

Travelers that decide to start an adventure in this gorgeous city can explore its lively parks, culture, and architecture, and enjoy the perfect view of the city from some of Santiago hills.

Some of the attractions are the Parque Metropolitano, The Museum of Human Rights, and the Festival del Barrio Brasil.

Santiago de Chile is a beautiful city and a safe place to visit only if you are watchful enough and practice your common sense. The threat of crime exists and to avoid displeasing situations, minimum safety precautions are enough.

Even though taxis are considered safe in Santiago, some are unlicensed, so it is better to take the licensed one since it was reported that some tourists had been attacked by taxi drivers. The licensed taxis have the logo of the company on their car. While you are at the airport, you should pay attention to your things, due to a large number of robberies in recent years. Buses can also be risky after dark.

Theft of personal belongings is very common in Santiago and grabbing of wallets and purses are extremely popular. You have to hold onto your bags at all times and do not put it away from your sight. Since tourists are the ones usually carrying bigger amounts of cash, thieves target them. So, when paying for something, do not show your wallet or cash in public.

Besides the occasional flooding that can be caused by heavy rains, air pollution is the main problem in Santiago.

Muggings are frequent in Santiago, and the main targets are drunk people outside of clubs, especially foreigners, that walk alone at night. In the case of being attacked, do not resist, but give them what they want, because thieves tend to be impatient and can become violent, which can lead to further more serious consequences.

The threat of incidents of terrorism exists in Santiago since anarchist groups tend to occasionally use small explosives around the banks and in public transport. Tourists just need to follow the advice from authorities and tour guides.

Taxi drivers are the most usual scammers, once they realize that they are driving the foreigner. Travelers are often overcharged. Different strategies of robbing are used, so be aware that the possible threat is the individuals who are asking for help or directions.

The crime against women tourists is not frequent in Santiago and they usually have no trouble. What each woman should know is that men from Santiago tend to comment or make some gestures that are not pleasant to alone women on the street. The best advice is not to dress provocatively and not to walk alone at night. As long as you do not attract attention, everything would be fine.

So... How Safe Is Santiago de Chile Really?

Santiago de Chile is full of beautiful landscapes and natural wonders which makes it a lovely place to visit. Its clean, modern and safe streets attract tourists worldwide.

Nevertheless, the dark side of each major city is a crime.

Popular areas, such as Plaza de Armas or Bellavista, can be risky since the police are not present there during the night.

Serious crimes against tourists are not common, so the visitors just need to pay attention to thieves and other petty crimes and can consider the city of Santiago a safe city.

How Does Santiago de Chile Compare?