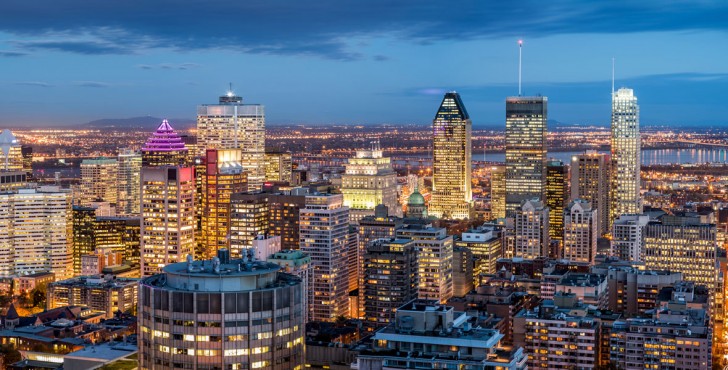 Montreal is the second-most populous city in Canada which is named after Mount Royal, the hill in the heart of the city with Mount Royal Park, one of Montreal’s major greenspaces.

It is full of culture and history and the French influence is noticeable at first sight.

What characterizes this city are 50 National Historic Sites of Canada, more than any other city.

It is well known for its attractive architecture, parks, theaters, restaurants, and many summer festivals such as Just for Laughs, Montreal World Film Festival, Nuits d’Afrique, and the Montreal Fireworks Festival.

The city is Canada’s center for television and film productions, radio and theatre, thus it is often referred to as Canada’s Cultural Capital.

Some inevitable attractions are Mary, Queen of the World Cathedral, the Notre-Dame de Montréal Basilica, Pointe-à-Callière Museum, and many others.

Montreal is considered a very safe city, but it is not the safest one in Canada. Tourists need to be watchful and pay attention to the suspicious people around them to avoid any kind of unpleasant situations while in Montreal.

Even though the STM transit system in Montreal is one of the safest in the world, accidents can occur daily. When in buses and public transport, tourists should carry their possessions close to them. Pedestrians should cross the street at the crossroads and respect traffic lights.

Pickpocket reports in Montreal are usually from the city’s restaurants and cafes, where thieves just grab money from pockets or purses. You should have your valuables close to you and keep an eye on them.

Due to the weather conditions, flooding is possible in spring, while ice storms can happen during winter in Montreal. The citizens are well prepared in case of an earthquake which is possible to happen here.

In some urban areas in Montreal, the possible risk of kidnapping and mugging exists, so tourists are advised not to walk through certain risky zones, especially after midnight.

Recent terrorist attacks on crowded places in Europe make every country feel at danger and prepare the city for possible attacks. However, the threat is unlikely.

Scam risks in Montreal are unlikely and very rare. However, safety precautions are always advisable.

When female tourists are in question, an interesting fact is that the STM offers a "between stops" service. This means that if a bus driver considers that certain bus stop is dangerous for a woman that is traveling alone at night, he/she can offer her to get off the bus between two regular bus stops. All in all, women are generally safe in Montreal.

So... How Safe Is Montreal Really?

This historic and cultural center of Canada attracts tourists worldwide and proves its nickname The Paris of Canada.

Downtown is full of restaurants and shops, luxury hotels, museums, and galleries.

One of its main attractions is Parc Lafontaine and St. Michael and St. Andrew’s church.

Nowadays, the crime rate in Montreal has declined and it makes it an ideal destination for tourists.

Montreal people, who are very friendly and helpful, just add to its beauty and attractiveness.

The major crime acts are not common in Montreal, and violence rates are very low.

However, some petty crimes and theft are frequent as in any other major city, so tourists should keep an eye on their valuables.

Some zones have a bad reputation due to drug addicts and prostitution.

Gangs are reported to function around Notre Dame Quest and Wellington Street.

Montreal makes an excellent tourist destination and travelers should not be worried about possible dangers, but enjoy its culinary, cultural, historical, and architectural beauties, since Montreal, as well as the whole Canada, is an extremely safe place.

How Does Montreal Compare?