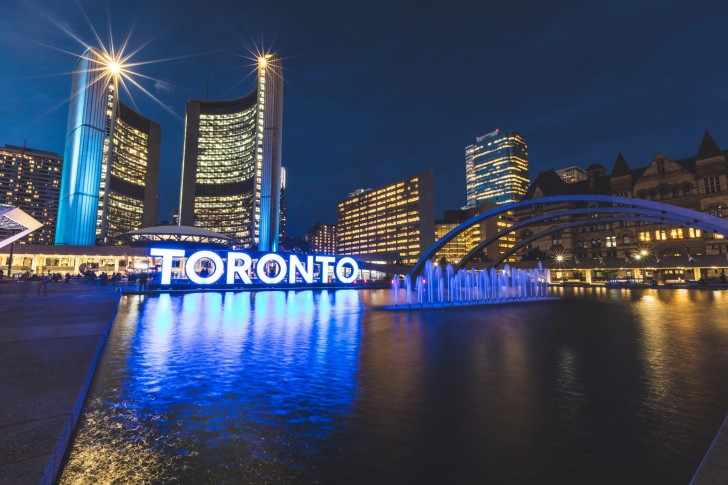 Even though it is not the capital city of Canada, it is its most famous and most populous city, for sure.

Toronto, the capital city of the Canadian province of Ontario, is located on Lake Ontario.

Besides being a great place for immigrants to come and live here, Toronto is a center for music, theater, film, and television production.

The headquarters of the main Canadian television networks such as CBC, CTV, City, Global, The Sports Network and Sportsnet are located in Toronto.

Business, arts, and culture are some of the attractions in Toronto.

The Royal Ontario Museum, The Toronto Zoo, The Art Gallery of Ontario and The Gardiner Museum of ceramic art are only some of the features that attract tourists from all over the world who seek education and knowledge.

Toronto is the least dangerous city in North America and among the top safest cities in the world. However, like any other big city, some crime problems exist and some areas should be avoided by tourists.

Driving in Canada is relatively safe, although tourists are advised to use public transportation and taxis when touring the city. There are no reported risks in terms of transport and taxis in Toronto.

Toronto is relatively safe in terms of pickpocketing. However, some records of pickpocketing were made in restaurants and cafés, so tourists need to be careful to minimize the probability of theft.

Natural disasters are not strange to Canadians, as one of the most geographically diverse countries in the world. Possible disasters are tornadoes, snowstorms, and floods, depending on the region, but the risk level in Toronto is low.

As most of the major cities in Canada, Toronto is considered a safe city when mugging and kidnapping risks are concerned. Nevertheless, awareness of your surroundings is necessary.

An act of terrorism could occur in Canada since it can never be predicted. This means that tourists need to be constantly vigilant.

Unlike other Canadian cities, where scam risks are unlikely and not reported, Toronto has certain reported risk, especially via the Internet, when tourists buy tickets online. Pay attention to the website where you enter your credit card information, because some of them might not be secure.

The general crime rate in Toronto is very low and the city has a reputation as one of the safest major cities in North America so it is very welcoming for women travelers. Since women travel for countless reasons, often alone, when it comes to security women face greater obstacles, so they should not be on the street after dark, especially around Parliament and Jarvis Streets.

So... How Safe Is Toronto Really?

Taking into consideration the fact that Toronto is a cosmopolitan and populous city, it is expected that the crime rate is at a high level.

However, the great thing about it is that people are walking around, both during the day and night, which makes Toronto quite safe.

One of the longest streets in the city, and at the same time risky one, in terms that it can take you to unsafe parts of the city at night is Yonge Street.

On the other hand, there is Yorkville where there are luxurious shops, restaurants, and the city’s best attractions.

Thus, this is considered the safest part of the city.

The Entertainment District, as its name says, is full of nightclubs and restaurants and this area can be risky after midnight because of the drunk people that are coming out of the bars.

Canada’s tourism infrastructure is fantastic and the police are reliable, so tourists can feel relaxed once in Toronto.

So if you want to see plenty of beauty, do not worry about safety.

Just take your camera and prepare for real visual pleasure.

How Does Toronto Compare?