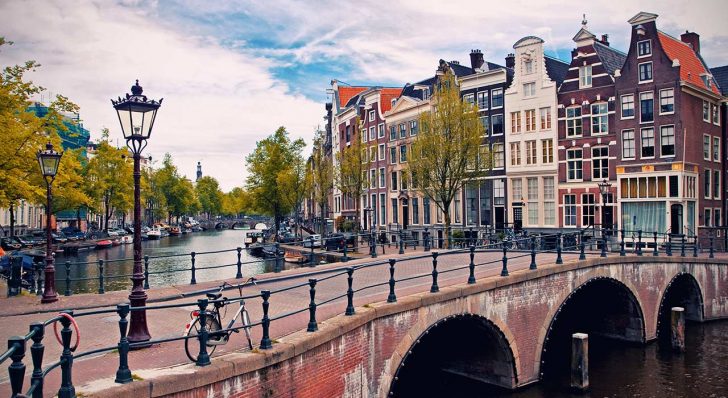 Netherlands - safety as a country

Amsterdam is the city with more than one million inhabitants and it attracts over 7 million international travelers annually, making it one of the most visited destinations in Europe.

It represents the country’s largest city and its financial and cultural center, also known as Venice of the North due to the canals that criss-cross the city and more than 1,500 bridges.

The city has something for each taste, amazing architecture, culture and history, vivid nightlife and plenty of events and activities to enjoy.

With a lot of charming venues and fascinating museums, the city offers an abundance of opportunities to discover real Dutch culture.

Famous festivals and events in Amsterdam are Koningsdag, the Holland Festival for the performing arts and the yearly Prinsengrachtconcert.

When in Amsterdam, the most dangerous thing that can happen to a tourist is to get struck by a cyclist while crossing the street or get pickpocketed in the crowds in front of the well-visited sights. Areas like Kolenkitbuurt, Overtoomse Veld, Amsterdam-Zuidoost and Osdorp are best to be avoided. Amsterdam is one of the safest cities in the world.

When it comes to transports and taxis risk, the level is not high and they might be considered very safe in Amsterdam. It is better to avoid taking the taxi at Central station and Leidseplein. All taxis are metered, so you need to ask them to turn it on if drivers do not want to do that. There are unlicensed, illegal taxis and they can be recognized since they do not drive Mercedes cars. Driving around Amsterdam is pain and pedestrians should be extremely careful when crossing roads, even on zebra crossings.

The pickpocket-related risks exist in the Netherlands and Amsterdam’s busy streets are frequent. Places, where thieves operate, are restaurants, public transport, and transport hubs, while bag snatching often happens on trains and trams. Thieves work in pairs, one tries to distract you while the other robs you. Taking money from the automatic teller machines around nightclubs and bars should be avoided.

The Netherlands is not prone to any natural hazard and there is no risk.

The chances of being mugged or kidnapped in Amsterdam are very low, and this is a city where minimum precautions will minimize the risks. As in any city, there are dangerous zones that are advised to be avoided.

Besides the fact that the Netherlands has not been on the target of the terrorists, these attacks cannot be predicted, so it is best to remain watchful of any strange activity. European cities have been targeted, so there remains a heightened threat of terrorist attacks.

Frequent scams in Amsterdam are “gold ring” tricks, fake petitions and drink spiking. There is the chance that the police in plain clothes ask to check your money or credit cards, so be clever and do not show them anything, since they will rob you immediately. Never leave drinks unattended, nor accept drinks from strangers.

The Netherlands, as well as Amsterdam, is known as a 'female-friendly' city and this is a place where women traveling alone should feel safe. The risk that a solo female traveler will be attacked is very low.

So... How Safe Is Amsterdam Really?

Amsterdam has always been a city that attracted many people, and nowadays it is the city with the most different nationalities in the world.

Even though Amsterdam is a relatively safe city, normal precautions against pickpockets should be applied.

The police are doing their best to remove beggars from the streets and protect tourists from possible bag snatching risk.

When in Amsterdam’s streets you need to be watchful as a pedestrian, as well as a traveler in public transport or taxi.

There have been reports that some women visiting the Red Light District at night were harassed or assaulted.

All in all, Amsterdam is a very safe city which should be visited for sure, and you should not worry about your safety as long as you practice common sense, which is necessary in any large city in the world.

How Does Amsterdam Compare?