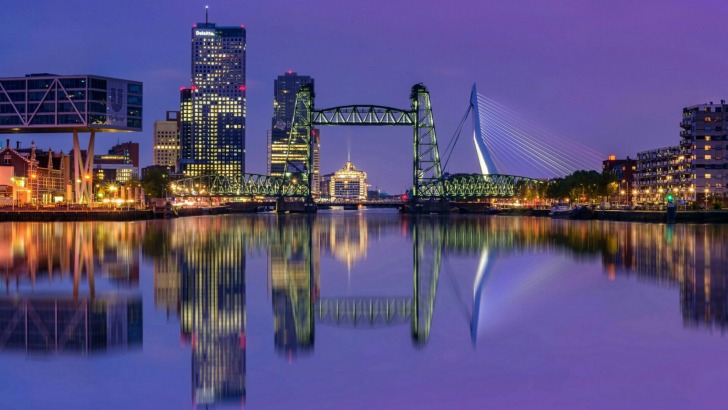 Netherlands - safety as a country

Rotterdam is a popular city in the Netherlands, a hardworking town with a modern centre because the old centre of town was bombed during the war.

An interesting fact about this big city is that the port of Rotterdam is the largest in Europe and the fourth biggest port in the world.

Rotterdam is a hardworking town with a modern centre because the old centre of town was bombed during the war, and many choose Rotterdam over the capital – Amsterdam – that collects all the glory.

With its high quality of life and lively cultural scene, Rotterdam has been welcoming visitors for almost 800 years, as an important transit, logistical and marine centre.

Rotterdam is generally a safe city to travel to. Its crime rates are low, and your biggest concern in this city might be pickpockets. Use common sense and apply basic precaution measures and that should minimize the chances of something going wrong.

Transportation in Rotterdam is generally safe and reliable, but it is advised to be careful in public transportation since that's where pickpockets operate.

There is risk of pickpockets, mostly around tourist attractions, but it shouldn't be too big of a problem if you take precaution measures, such as keeping your valuables in a safe place, not carrying all your money in the same place, and not carrying anything valuable in an easily accessible part of your outfit.

There are no significant threats of natural disasters in Rotterdam, but there have been reports of the Netherlands being prone to extreme flooding, which is why the Dutch invest heavily in infrastructure to prevent similar natural disasters from happening again.

Mugging or kidnapping aren't common in Rotterdam, but it is still recommendable to avoid poorly lit and deserted areas and to not accept drinks from strange people, although drink spiking is not common either.

Even though there haven't been any terrorist attacks in Rotterdam's recent history, these types of attacks shouldn't be ruled out, especially since its neighboring countries France and Belgium have been targeted, so be aware of your surroundings at all times.

Traveling alone in Rotterdam is very easy for females. The country is very safe and friendly. Just avoid poorly lit and deserted areas and walking alone at night, with a few more basic precaution rules and your trip should go smoothly.

So... How Safe Is Rotterdam Really?

As a big city, Rotterdam is less safe than the rural areas, but overall it is a great city where it’s safe to hang out.

The Netherlands is among the safest countries in the world with the highest quality of life, so un “unsafe” city there is pretty much like a safe city anywhere else.

Just like everywhere else in the world you need to use common sense regarding your safety.

There is a heightened risk that you will encounter pickpockets and other forms of petty crime such as bag snatching and bicycle theft.

Rates of violent crimes are very low but you should still avoid some parts of Rotterdam.

The areas that are often described as more “dangerous” (for Dutch standards at least) are the south and the west.

“South” is the region south of the Maas river (with some exceptions like Kop van Zuid and Noordereiland), and “West” being the area between Delfshaven and Schiedam, especially Marconiplein.

Here, prostitution has been legalized in 1988 to a certain extent, but illegal prostitution still exists and hotel personnel is obligated by law to notify the authorities if they suspect these kinds of activities in their hotel.

It is highly recommended to use protection if and when indulging into these practices at brothels or other locations in Rotterdam.

How Does Rotterdam Compare?