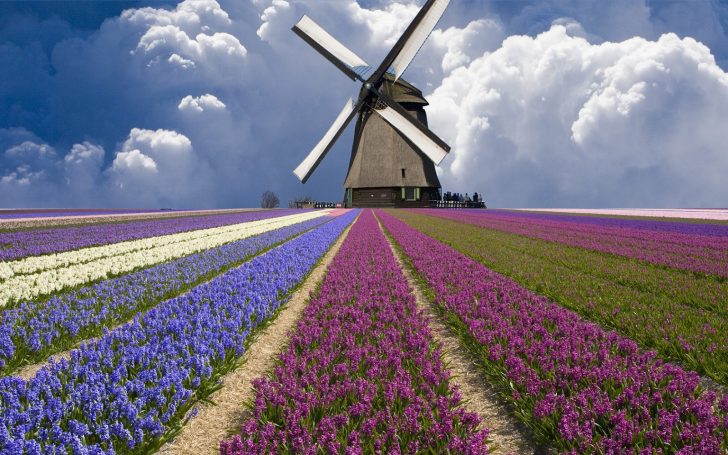 A country with, according to many, the most interesting capital in Europe, the Netherlands shares its borders with Germany to the east, Belgium to the south, and France in the Caribbean.

It is known for its rich cultural heritage and its reputation as a country of painters, windmills, clogs, and flatlands.

Today, it is a contemporary European country with an international character and a liberal spirit towards everyone, which is the biggest reason tourists adore coming here, especially Amsterdam, Europe’s “capital of the free-spirited.”

The Netherlands also boasts wonderful landscapes that are comprised mostly of flatlands, as hills may be found only at the Veluwe and Southern Limburg.

In the Netherlands, industrialized farming is extremely developed: so much so, in fact, that today it is one of the largest food exporters in the world.

However, tourists expecting to see the gorgeous landscapes filled with tulips and windmills might be surprised, since areas like that do exist, but they have to be found (for example, in the Waterland and Zaan Region) and they are so secluded that even most Dutch have never been there.

The Netherlands is generally a very safe country to travel to. Its crime rates are low, and your biggest concern in this country might be pickpockets. Use common sense and apply basic precaution measures that should minimize the chances of something going wrong.

Transportation in the Netherlands is generally safe and reliable, but it is advised to be careful in public transportation since that's where pickpockets operate.

There is risk of pickpockets, mostly in larger cities, but it shouldn't be too big of a problem if you take precaution measures, such as keeping your valuables in a safe place, not carrying all your money in the same place, and not carrying anything valuable in an easily accessible part of your outfit.

Mugging or kidnapping aren't common in the Netherlands, but it is still recommendable to avoid poorly lit and deserted areas, and to not accept drinks from strange people, although drink spiking is not common either.

Even though there haven't been any terrorist attacks in the Netherland's recent history, these types of attacks shouldn't be ruled out, especially since its neighboring countries France and Belgium have been targeted, so be aware of your surroundings at all times.

Traveling alone in the Netherlands is very easy for females. The country is very safe and friendly. Just avoid poorly lit and deserted areas and walking alone at night, with a few more basic precaution rules and your trip should go smoothly.

So... How Safe Is Netherlands Really?

The Netherlands is a very safe country to travel to.

However, in larger cities such as Amsterdam, Rotterdam, The Hague and there is heightened risk that you will encounter pickpockets and other forms of petty crime such as bag snatching and bicycle theft.

Rates of violent crimes are very low but you should still avoid some parts of larger cities, such Kolenkitbuurt in Amsterdam and Morgenstond in the Hague.

Some other minor issues in the Netherlands include catching a Lyme disease when walking or camping in forests and dunes, (so be aware of ticks) and of course, diseases related to the prostitution issue in the Netherlands.

Here, prostitution has been legalized in 1988 to a certain extent, but illegal prostitution still exists and hotel personnel is obligated by law to notify the authorities if they suspect these kinds of activities in their hotel.

It is highly recommended to use protection in indulging into these practices at brothels or other locations in the Netherlands.

How Does Netherlands Compare?