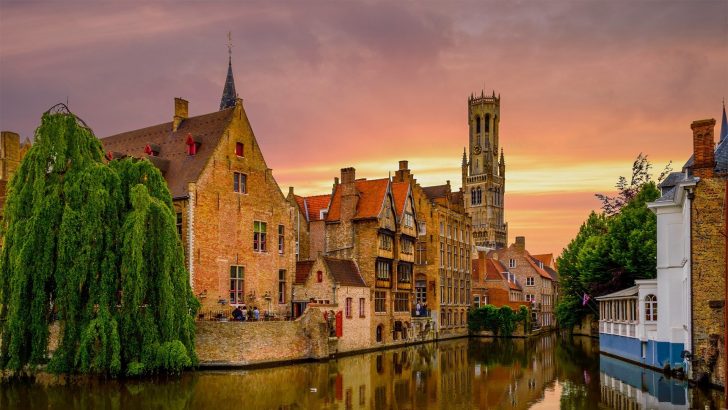 Located on the North Sea coast in the Benelux and surrounded by the majority of the West European capitals, Belgium is often considered to be the center of Europe.

Its neighboring countries are France to the southwest, Luxembourg to the southeast, Germany to the east and the Netherlands to the north, and it is, furthermore, divided into Flanders and Wallonia, while Brussels is considered as a third bilingual region.

The charm of this gorgeous country in the middle of Europe is that it’s a perfect mix of historic and modern: it blends old, breathtaking medieval castles and hip cafes and art museums.

It is also home to some of the best food in Europe: chocolate and waffles more than you can eat!

The safety issue here is that it is exposed to a severe danger from a terrorist attack, apart from it crawling with pickpockets and criminals waiting to take advantage of unsuspecting tourists.

Overall, Belgium is a safe country to travel to. Crime rates are low and anything happening to you on the streets of Belgium is unlikely. The only issue to keep an eye on, apart from being vigilant for terrorist attacks, is petty theft and picpocketing.

Transportation in Belgium is very reliable and safe. However, be careful when taking a ride on the bus or a train, since they are frequented by pickpockets and thieves that might try to snatch your personal belongings.

Belgium being a top tourist destination in Europe, the chances of encountering a pickpocket are high, especially in Brussels, Belgium's capital. Be wary at subways and train stations, and keep your valuables tightly by your side in order to prevent someone snatching them.

As for muggings, Belgium is relatively safe. There haven't been many reports of someone being violently mugged or kidnapped, but some areas of Brussels should definitely be avoided. Ask local people or authorities about areas of Brussels that you should skip, or that are considered dangerous.

As for terrorism, the threat unfortunately exists, and the risk of it happening is high. Since 2015. there have been numerous attacks and attempts of attacks so it is recommended to avoid crowded places, areas, events or demonstrations.

As in any country, especially those frequented by tourists, there are high chances of someone trying to scam you. Always double check your change, negotiate everything in advance, and be wary of people trying to distract you are offering help with your luggage, as it might be a way to steal something from you.

Belgium is, generally speaking, very safe for women travelers. Try to avoid walking alone along dark, poorly lit or deserted areas, or finding yourself late at night in areas filled with bars or clubs as you might receive some unwanted attention. Apart from that, use your common sense and your trip should go smoothly.

So... How Safe Is Belgium Really?

Just like many other European countries, Belgium is relatively safe to travel to and there are few threats to worry about.

However, there are some safety issues to consider before venturing to Belgium.

First and foremost, there’s the risk of pickpockets lurking around the big cities.

Even though rates of violent crime are low, petty theft is an ever-growing problem in countries like Belgium.

Thieves may be roaming along at the popular tourist landmarks, transportation, anywhere really in the bigger cities of Belgium.

In case of an incident of serious or petty crime, contact the nearest police station and fill out a police report, since you’ll probably need it for a replacement passport or insurance claim.

The local number in Belgium is 101 for emergencies requiring police assistance or 112 for all other emergencies.

Another issue in Belgium is terrorism.

Sadly, terrorism is on the rise precisely in this country, especially during the last two years.

Since 2015, Belgium has been the target of several terrorist attacks executed by ISIS, that occurred at Brussels’ Jewish museum, in the subway, and at the airport, and there were some attempts on the Thalys Train.

Security has, of course, been increased and police investigations are ongoing while the public awareness is present at all times.

Still, the possibility of a terrorist attack in Belgium is what has been keeping tourists at bay for the last year.

How Does Belgium Compare?