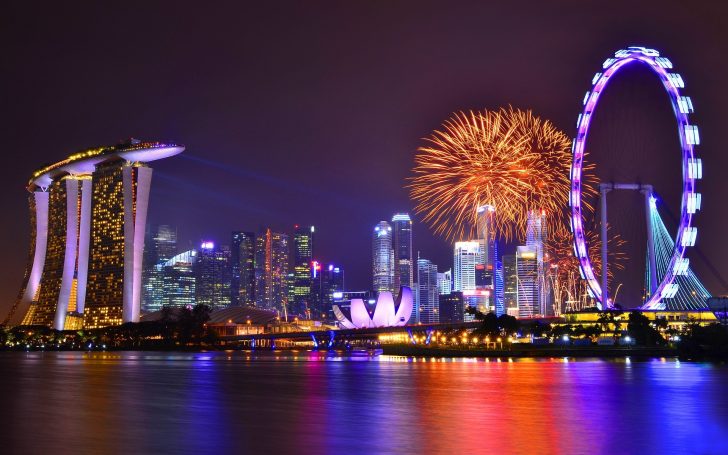 A well-known, extremely developed and prosperous country, Singapore was founded as a British colony, yet its best years started after gaining independence.

Its charm lies in the mixture of its breathtaking skyscrapers and subways of a modern, contemporary city and a medley of Chinese, Malay and Indian cultures.

Also, some of this country’s many virtues are tasty food (Singaporean food is legendary and very well known, with huge and crowded food centers and 24-hour coffee shops offering cheap food from all parts of Asia), excellent shopping opportunities and a lively night-life.

However, it’s not all about technology and vibrant city centers: more than 50% of Singapore’s area is covered in greenery, while boasting over 50 major parks and 4 nature reserves, resembling a real enchanting garden city.

Since it’s known for its stability, it earned the nickname ‘Switzerland of Asia’ since it’s so predictable, squeaky clean and, many say, sterile compared to the poverty, dirt and crime rates of much of Southeast Asia.

But if you scratch below the surface just a stray from the tourist trail you’ll see there’s so much more to this amazing country.

Generally, Singapore is very safe to visit. It is probably the safest country in Asia to travel to, but it has its dangers. Use your common sense and keep your valuables closely by your side, since the most common type of crime is petty theft.

Transportation is very safe, reliable and excellently maintained in Singapore. When renting a boat, keep in mind there's piracy near the coastal areas of Singapore.

Pickpockets aren't that common but they do operate. However, following and applying basic precaution should get you out of any uncomfortable situations.

Singapore is immune to natural disasters: there is nothing in its near vicinity that could represent a threat, though Indonesia's earthquakes can sometimes be barely felt. Other landmasses shield this country from tsunamis, typhoons, and tornadoes. Flooding from November-January monsoon season has been known to happen but represents a minor threat.

Singapore is very safe when it comes to kidnapping and mugging: they rarely occur, and even less so to tourists and foreign visitors.

There haven't been recent terrorist attacks in Singapore's recent history, but they shouldn't be ruled out, so remain aware of your surroundings at all times.

There are scammers in Singapore but are easily avoided, only if you use your common sense. There are con artists pretending to be landlords offering a property for rent on the website, and as soon as you pay, they disappear, so be very cautious when making reservations through untrustworthy resources. Like in the rest of Asia, the street or store vendors are pretty persuasive and tiring, so if you feel pressured into purchasing goods, leave the store.

Women should feel completely safe in this country, even at night. That does not mean you should let your guard down - keep to your wits and your common sense, and do not do anything you wouldn't in your own country.

So... How Safe Is Singapore Really?

Singapore is extremely safe to visit, by virtually any measure.

The majority of tourists, including women traveling solo, will not encounter any problems walking along the streets alone at night.

There’s no police on the streets either, but it is still very safe.

However, it is not without its dangers: beware of pickpockets in crowded areas and tourist landmarks and do not let your guard down just because you are feeling safe.

Keep your valuables close by your side and remain vigilant at all times, especially in the area along Orchard Road, since it is known as a pickpocketing heart of Singapore and there were numerous reports of theft submitted in this area.

Now, even though it’s perfectly safe, Singapore women avoid walking alone through the “lorongs” in Geylang and prefer sticking to the main road.

Geylang is the red light district of Singapore, so women avoid appearing there in order to steer clear of unwanted attention at night.

However, that doesn’t mean you should avoid this area completely: it is an area well-known for its late-night local food fare.

So, if you are dressed conservatively (to set yourself apart from the sex workers) or look like a tourist, you should have no problems.

How Does Singapore Compare?