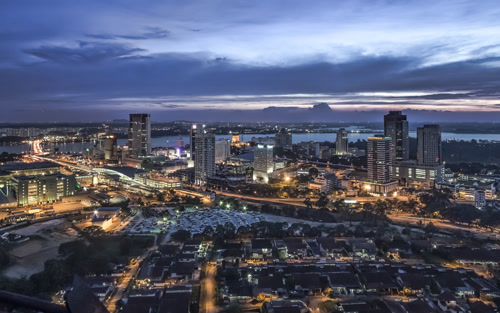 Malaysia - safety as a country

Johor Bahru is the state capital of Johor in southern peninsular Malaysia, just across the causeway from Singapore.

A bustling city but one with little of interest for the casual tourist, it is a significant regional transport and manufacturing hub.

Johor Bahru is probably more well known as an industrial city rather than a tourist-friendly town.

Many tourists come here to settle a little cheaper near Singapore, which is their right tourist destination.

However, in this city, you can see interesting historical sights: Sultan Abu Bakar State Mosque, Masjid India – and mosque with two different minarets, Sultan Abu Bakar Royal Palace Museum, and some others.

The city has an average crime rate. Remote areas from the center are not particularly safe. Walking around the city at night is not recommended, and it is also better to move in groups. Original documents and valuables are best kept in the hotel safe. Keep track of your bags, and do not leave them unattended.

Public transport is not particularly safe, and often there are many pickpockets. Watch out for the BLUE taxis; they are meant for tourists, extraordinarily overpriced, and will actively approach you if they think you look foreign enough. Stick to the standard RED taxis. Insist on using the meter, or offer a small tip (around 5 RM) on top of the meter price before stepping in.

There are many pickpockets and often they work in places crowded with tourists or in public transport. Avoid crowded places. Hold your backpack or bag tightly at crossroads and streets - they are often snatched from the hands of thieves passing by.

Johor Bahru is often affected by natural disasters such as floods, landslides, haze, earthquakes, and other man-made disasters, as well as some rare cases of droughts and tsunami. Explore the surroundings before your trip here.

Grave armed robberies occur here in areas remote from the city center. Tourists are often victims of such crimes. Although if you do not shine with precious things and do not carry large amounts of money with you, you are unlikely to attract attention.

Terrorists are very likely to try to carry out attacks in Malaysia. Attacks could happen anywhere, including in places visited by foreigners. Be vigilant, monitor local media, and follow the advice of the local authorities.

Beware of Scratch and Win Scams. Victims are given reward tickets to scratch/tear/peel off on the spot to see if they win prizes. In these cases, victims would be informed that they had won awards in foreign lottery or lucky draws. The scammers would ask victims to make advance payment if they wanted to claim their prizes. They would even offer victims car rides to withdraw the vast sums of money, reported a local news source. After this, victims would realize that the prizes never existed or were of lower value than previously promised.

Women are better off walking in the company and not attract too much-unwanted attention. Dress modestly and don't stay in bars late at night. In the daytime, you can walk around the city even by yourself.

So... How Safe Is Johor Bahru Really?

The crime rate in Johor Bahru is average.

Most crimes are associated with the theft of things from a car, car theft, vandalism.

The city also has a high level of bribery and corruption.

Although the crime rate in Johor Bahru is still higher than elsewhere in Malaysia, things have become better since the Johor Bahru administration took action to increase the police presence and initiate several anti-crime measures – including the creation of a hotline for tourists to call if they require urgent police assistance.

In order not to get into trouble, it is recommended to follow some precautions.

Keep your bags and backpacks tight with you.

Often they are pulled out at intersections right from the hands of thieves riding motorbikes.

Avoid walking around the city alone.

You should walk around the city in groups of preferably 3 or more for safety.

You also need to be careful with taxi drivers.

Often they try to earn money from tourists, inflating the real price of the trip.

Tap water should be boiled before drinking.

As a rule of thumb, the general hawker food scene in Johor Bahru is hygienic though certain areas are less so.

So keep an eye out for those dirty hawkers who pay very little attention to hygiene.

How Does Johor Bahru Compare?