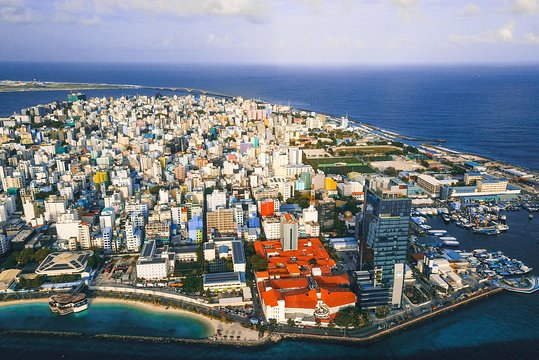 Maldives - safety as a country

Malé is the capital of the Maldives.

The city occupies the entire islet of Malé and is located at the southern rim of North Male Atoll.

Malé is one of the world’s densest cities.

Malé is usually used as a transit destination with “nothing to do” on it.

However, it does have a distinctive character of its own, with narrow streets, colorful houses, graffiti, and a durable communal feel.

Malé is generally safe, but tourists are not advised to walk around the city after sunset. You should wear modest clothes and not get involved with drug dealers. You need to monitor your pockets constantly, and it’s better to keep valuables in the hotel safe. Keep in mind that Male is the capital of a Muslim country, and specific rules must be followed more strictly than anywhere else.

Public transport, as such, is absent in Male. However, taxis and water taxis between the islands can be used. Taxi is safe enough in the small. Use it if you return late at night to the hotel. Do not sit in the front seat - it is better to sit in the back. women are not recommended to take a taxi alone.

Pickpockets do operate here and there, mostly in the capital of Male, but tourists are rarely targeted - because they usually aren't located in Male. Still, you should be careful. Don't flash your belongings in public or leave your valuables in plain sight and on the beach.

Tsunamis and storm surges are a threat to coastal regions, particularly gulfs, bays, and inlets — the flood hazard results from river floods and torrential rain. The hazard of dryness and drought is caused by significant deviations from the average amounts of precipitation.

Armed robberies are quite common. Often this is drug-related. Therefore, avoid wandering the streets of the city after sunset, move in groups. Do not carry a lot of cash with you. In case of an attack - give the criminals what they demand and then contact the police.

Terrorist attacks are possible in the least. Study the political environment before you travel here. Mosques and large gatherings of people often become targets for terrorists. try to avoid these places.

Scam in Male is mainly associated with tourists. You may be offered excursions or trips to other islands, take money from you, and the abyss on the day of the tour. Book tickets for all with licensed operators only. Also, keep an eye on your pockets if someone on the street is trying to distract you by asking for help or asking questions. Maybe someone else is trying to rob you at this time.

Women are better off not traveling alone. And you should also dress modestly and not draw too much attention to oneself. It's better not to drive in a taxi alone.

So... How Safe Is Male Really?

Malé is not quite a safe place.

The index of crime is moderate here.

Most crimes connect to home broke, and things were stolen and robberies, problems with drugs, and a very high level of corruption.

The Foreign Office (FCO) has warned tourists to avoid rallies or protests in the capital Malé but said that outlying islands and the main international airport are safe.

Terrorist’s attacks could be indiscriminate, including in places frequented by expatriates and foreign travelers, including tourists.

But the Maldives government suggested the updated guidance was a general response to a global threat.

The Maldives is an Islamic country, and if you’ve never traveled to a Muslim country, you may be unaware of local laws and etiquette.

In many Islamic countries, not observing specific rules can carry a fine or prison time.

It is advised to dress modestly as well.

The theft of belongings left unattended either on the beach or in hotel rooms does happen.

Use the safe boxes in your hotel.

Malé is experiencing a growing drug problem among its youth, and petty crime has risen as a result – although from a shallow base.

How Does Male Compare?