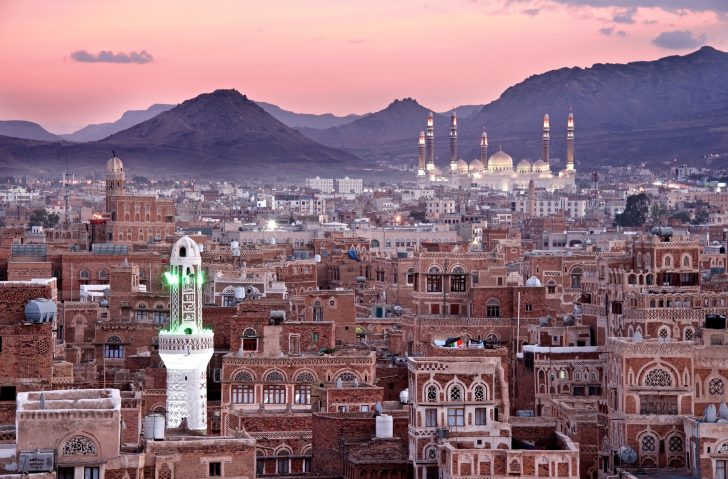 Yemen is a country located on the southern tip of the Arabian Peninsula, bordering Saudi Arabia and Oman.

Yemen is a country devastated by war and it has had a tumultuous history in the recent past with civil wars raging inside the country.

Though it is a country populated by extremely warm and friendly people and with a lot of things to offer culturally, naturally, and historically, it is still an extremely dangerous destination right now and visitors are discouraged from visiting.

What would be interesting for visitors, putting aside the current unfavorable political situation in Yemen, is the Sana’a – the old city, a mystical site, and at the same time a UNESCO World Heritage site.

You can visit and see a bunch of fairytale gingerbread-like houses situated in the streets that are alive with the sound of passers-by.

This is one of the oldest cities in the world.

If you’re a nature lover, the Socotra island is for you – this is a picturesque island untouched by modern man, and home to many unknown and rare species of the world, as well as plants.

Yemen is currently a very dangerous destination for potential travelers. Governments in several countries have even issued warnings against traveling to this country, for reasons such as terrorism, kidnappings and other types of violent crime. Visiting Yemen can end in you getting seriously hurt or killed.

The road transportation system in Yemen is extremely limited, with only a small percentage of roads paved. Taxis and public transportation are available but they are often in poor condition and lack safety precautions. Do not travel around Yemen unaccompanied under any circumstance.

Crime levels are high in Yemen and this goes for both petty and violent crime. Expect petty crimes like pickpocketing, bag snatching, camera snatching, and other forms of theft. Avoid crowded places, if you must leave your accommodation.

Floods and cyclones are Yemen's worst enemies when it comes to natural disasters. In 2015, the country's fifth-largest city, Mukalla was hit by severe flooding while thousands of people were left homeless.

Violent confrontations like muggings, armed robberies, and kidnappings are regular in Yemen so it is recommended that you take extra care on the streets of this country, avoid dark streets and deserted areas. Bear in mind that risks increase after dark.

Terrorists are very likely to try and carry out attacks in Yemen, and the biggest threat is coming to AQAP in a place where they have strong connections and in more isolated areas like Hadramawt and Shabwah. Remain vigilant at all times.

If you go to Yemen, scams are the least of your problems. However, there are scammers here too, and with them, the risk of you getting crossed over. Double-check your change, never pay anything upfront and negotiate everything in advance. Be very careful around ATMs and be wary of anyone trying to distract you.

Yemen is not a safe destination for women. Do not go alone anywhere, and keep in mind that it is best not to move around Yemen at all, except if you're in a car with windows rolled up.

So... How Safe Is Yemen Really?

Yemen is an extremely dangerous country, and unless you absolutely have a dire need and necessity to be here, do not venture to Yemen: there is a brutal war raging inside the country at the moment and anyone visiting it could end up injured or dead.

If you are already in Yemen, do everything you can to leave as soon as the opportunity presents itself.

The situation is so serious because the country is split between militants: one is a Shia militant group and the other Al-Qaeda.

Given that the country is divided between militants, you can only imagine the risks you can run into: terrorist attacks, abductions, tribal violence, and general lawlessness are only some of the threats in Yemen.

Statistically, it makes sense that those who are staying in the country for a while have a greater chance of being killed, but groups of tourists aren’t safe either as there are heightened risks of terrorist groups targeting tourists in groups by carrying out suicide bombings and armed ambushes in places frequented by tourists.

You are not safe even in the capital Sana’a, as the country’s law enforcement is generally unreliable.

Refrain from traveling to the San’aa region of northern Yemen, as there is a serious risk of violent civil unrest and political turmoil.

However, traveling to some of the eastern and southern parts of the country isn’t safe either as these are the places where Al-Qaeda is active.

These places are Ma’rib, Shabwah, Hadramaw in the east and Aden, Abyan, Al-Bayda’ in the south.

How Does Yemen Compare?